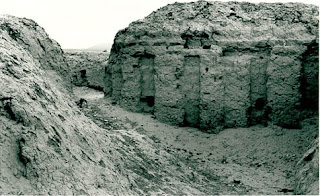 The vessel contained complete Terran environments...Life became a struggle merely to survive for those humans that were left. In this struggle, all knowledge of the ships mission or even, in fact, that the humans were on a ship, was lost. Ship's systems were maintained in a minimum operative state by the vessel's main computer and the robots that were operating at the time of the cloud's entrance into the starship. Later generations of humans lost all sense of identity with the ship regressing into a state of savagery.
--Metamorphosis Alpha

The Ambers live magically lengthened lives, but they have seen too much and are bored. They seek anything to relieve this boredom. On top of their other traits, the Ambers possess a bizarre sense of humor. It amuses them to watch adventurers battle obstacles which the Amber family members place in their way. The Ambers are equally amused whether the adventurers succeed or fail. A good spectacle is more important to them than defeating the adventurers.

So, basically, there was:

-a prophecy of a great flood that the inhabitants of this fortress have been waiting for for a verrrry long time, or
-an actual great flood which they don't know is over yet, or
-some primordial lich or sorcerer-patriarch decided the outside world was in a Miasmatic Phase that his family and the lands they protect would have to wait out, so as to be able to begin a literal Renaissance spawned from uncorrupted lifeforms once it was all over

Anyway, point is now there's this palace--colossally imposed on the landscape like a dead stone god, hermetically--in every sense of the word--sealed, containing all the flora and all the fauna and all the items of culture and technology, because it's an ark.

Needless to say: this didn't work at all. After a few thousand years, most species were outDarwined or eaten, others simply dried up from lack of sunlight or welcoming weather. Everything that thrived was a dangerous mutant, everything that could think went insane.

It is laughably easy to get in. The locals will tell jokes about the inbred idiots that haven't seen the sun in centuries, and then they will tell you that no-one ever comes out alive.

The hobbies of the Antediluvian inhabitants include, but are not limited to:

-Breeding sharks in tiled pools.
-Alchemically modifying their own digestive juices so as to be able to chew and metabolize rock.
-Throwing babies.
-Pretending to be dead for decades at a time.
-Playing elaborate combinatoric wargames in an attempt to model what they suspect is going on in the outside world.
-Asking intruders questions and not believing the answers and then becoming very upset.
-Hiding from blasphemous deformed freak descendants of their own pets.
-Devising new and unusual ethanol-based beverages.
-Trying to renovate the architecture so as to ensure a decent and continuous supply of ice.
-Casting Speak With Dead and/or passing out behind the glass case in the All Maps Yet Devised room and waking up thinking they'd just cast Speak With Dead.
-Looking for new and exotic lifeforms to evolve so they can sacrifice them to their cruel gods.
-Puppet shows!!!!
-Making elaborate and very focused traps to protect themselves from creatures that may or may not have become extinct millennia earlier.
-Trying to murder each other through proxies. (Their complex dogma suggests outsiders are irredeemably fallen and so if they can get them to bump off their despised relatives without directly suggesting it they'll remain pure until the flood or miasma ends.)
-Polishing things in the Flatware Of All Known Nations Room.
-Composing works of taxonomy.
-Placing mystic seals across doorways after unfortunate mishaps.
-Insipid brunches that last 60 years where no-one really wants to talk to anyone else but does anyway.
-Losing maps they made of this sector that they could swear they left just over here on top that thing.
-Praying the new genus of octomantis will taste better than the previous three.
-Researching ways to build portals to dimensions that aren't more dangerous than where they already live.
-Waiting for creatures to become smart enough to hire or enslave.
-Experimenting with time compression.
-Astronomy.
-Multi-classing.
-Furniture design.
-Trying to create jesters via eugenics and controlled exposure to confidence-eroding phenomena.
-Trying to remember who got polymorphed into what and why, when, and whether this gecko might be them.
-Dress rehearsals and dry runs for internecine intrigues.
-Fox-hunting. Though what they call a "fox" and what you call a "fox" may not be exactly the same thing.
-Admiring the way the words "Invoked Devastation" just trip off the tongue.

A posting of mad genius.

Mind if I share this with my gaming group? They like my MA campaign (we're not using its rule system), but they're extremely centered on D&D and fantasy settings moreso in general. So I think something similar might interest them more.

sure, that's what it's there for

That is just about the coolest idea for a dungeon I've ever heard (although I actually only heard a smidgen of your idea and immediately merged it with Heinlein's Orphans of the Sky). But you could spend levels in that place trying to get to the upper decks! And then finding out where it came from! Wow.

I was just thinking this is one of the best ideas for a set of levels in a megadungeon EVAR.

Ahh, decadence. One of my favourite backdrops, and nicely done here as an alternative megadungeony thing. I have something similar in mind for Rauxes in my Greyhawk game if the players ever make it there :)

That seems really fun, I've got just the place for it in my game.

I wasn't totally sold until I got to the hobbies list. Damn, there are some great things in there.

Pretty cool stuff. Of course, I'm more likely to think of Zelazny's Amber, but that's my problem. (Those Amberites might fit into the ship too, now that I think about it...)

Mystic seals...Are those magical wards, or are they pinnipeds? (Answer: Yes.)

I've just decided that this is going to be a set of levels in my megadungeon.