I only killed one PC with this dungeon. Your turn...

Here kids, have a system-agnostic dungeon. This is the one the girls just escaped... 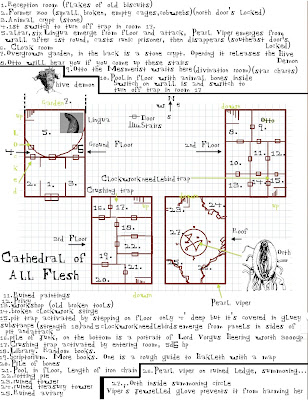 (Believe it or not, the obvious-if-you-just-look-at-the-map cunnilingual motif was an accident produced by randomly rolling monsters...)

Cathedral Of All Flesh Notes & Stats

This is an abandoned stone cathedral on a hill overlooking the edge of the rugged and inhospitable area known as The Bleak.

It is shaped like four enormous, many-eyed goats leaning together like sticks in a campfire, struggling toward the sky. The exterior is pitted and cracked.

Roughly rectangular rooms have been carved inside into what appears to be solid rock. There are no windows. The cathedral was built by devotees of Tittivila, Goddess of All Flesh before the church of the Insect God drove them from the Hackleth Isles during the War of Golems. The Insect Priests who dominate Hakleth have declared it a forbidden place.

Its appearance is so terrible that no-one who can see it clearly can approach within 30 yards--as such, it can only be approached blindly or at night.

A corrupt Tittivilan cult from the East--lead by the insane cleric, Pearl Viper, uses the Cathedral as a secret meeting place.

Each night of winter, she summons the Orth--an inscrutable extradimensional creature--into a sacred circle on the roof of the Cathedral and commands it to slay random inhabitants of Hakleth in the night. She is accompanied by her servant, Otto, an illusionist. The ritual begins each night at sundown and goes until to midnight, at which point the Orth is summoned and begins to seek victims.

The local authorities have installed a sentinel in a small watchtower--30' high--a few hundred yards from the hill, to keep an eye on both the Cathedral and the pass out of The Bleak. The sentinel is dutiful and carries a small telescope.

The cathedral is rumored to contain fabulous wealth. Also, naturalist Myria Essik of the Isle of Oth is offering 12000 gp to any party who can bring the Orth back to her alive and 4000 gp to anyone who can bring all of it back dead.

Plying the locals for information will reveal most of these things and uncover a rumor that one man claims to have driven if off with fire and another claims it was invulnerable to fire.

The adventure as written is suitable for a party of 3-5 adventurers levels 2-4, however it is easily scalable-there's no particular reason the foes couldn't be made more or less powerful.

-If a party should enter the Cathedral, be noticed, and then retreat, Viper will send Otto to follow them--and kill them if necessary. She will also then hire six mercenaries to protect her for the next week--five will attempt to seize control of the watchtower and one will roam the cathedral while she performs her rites each night.

-Note disabling the trap in room 17 requires simultaneously flipping the switches in rooms 10 and 4.

-Assume all nonhuman creatures attack and fight as typical fighters of a level equal to their hit dice. Any details not given here can be made up by the DM--for example how much of Pearl Viper's armor class is down to her talisman.

Orth (A tentacled thing from beyond) HD: 14 AC: 18 or 2 Speed: 3/4 human Intelligence: Animal
Attack: 5 tentacle attacks for d8 each. An unmodified "to hit" roll of 17 or above indicates the target is grappled and can be automatically bitten by the central maw for d8 points of damage the next round unless the target makes a successful escape roll on his or her next turn (using whatever your local mechanic for that is--assume the Orth's strength is 16 per tentacle).
Defense: All forms of attack damage the Orth, but the Orth will always be immune to the last form of attack it was successfully hurt with. For example: if it is attacked with steel, it will be hurt but then be immune to steel until it is attacked with (say) fire, in which case it will once again be vulnerable to steel but invulnerable to flame.

Pearl Viper (Cleric, level 6) HD: 6 AC: 19 or 1 (magic talisman + dexterity) Speed: human Intelligence: 15
Attack: Spiked chain for d6 or by spell. Her unusual spells include:
Choking Garment-Single target's clothes begin to choke him/her for d8 damage per round. Strength roll required to tear off collar. No save. Range: 20'
Defense:
-Prismatic Denial -Caster becomes immune to attack from anything of a chosen color and anyone wearing that color. Only one Prismatic Denial may be in effect on a given caster at any time.
-Runic Prisoner-Range: 20' Area of effect: 15' diameter circle Save allowed. Prevents targets from performing whatever their last action was until caster is slain. Attacking with an axe is considered different from attacking with a sword, for example, but running north is considered the same as running south. DMs judgment is required here.
-Note: Once per day, Viper may teleport without error within 200 feet by emerging from a shadow and then he may disappear into the same shadow and return from whence she came the next round after taking one action. You may fill the rest of her spell list with the number of spells appropriate to a cleric of her level in your system.

Otto (Wizard/Illusionist, level 5) HD: 5 AC: 17 or 3 (dex) Speed: human Intelligence: 16
Attack and defense: To keep things simple, just assume Otto has 2 spells, each of which he has prepared 3 times-- One allows him to create illusions that affect one person within 40' who saves at minus 2 and one that allows him to create illusions that affect everyone within a 40' radius--all of whom get an ordinary save. The illusions have visual and auditory components but he must save to maintain them if he takes damage. If you know your illusion rules backward and forward you can have the spells behave as they should in your system, if you don't assume, they otherwise behave as above and make judgment calls.

Lingua Necrotica (or Plague Tongues--rotting pale creatures 3-4 feet tall) HD: 3 AC: 16 or 4 Speed: human Intelligence: non-
Attack: Their touch does d4 damage and (failing a save) transmits an unspeakable disease. This malady causes the sufferer to be seized with the desire to lick the nearest living being. A successful grapple causes a network of thin yellow filaments to spouts from the sufferer's skin, attaching the plague victim to the unfortunate target of his or her affections. If left unbroken, these growths will eventually grow together into a viscid cocoon connecting and entombing both parties and transforming them--over the course of days--into a new cohort of lingua.

Clockwork Needlebirds (Small brass birds with syringes for heads) HD: 1 AC:15 or 5 Speed: 1.25 x human Intelligence: Animal
Attack: A successful "beak" attack does d4-1 damage and puts the target to sleep for d6 rounds if they fail to save. There is only enough juice for one full attack per bird. Subsequent attacks only do damage.

The Hive Demon (A creature entombed in ages past by the Insect Cult, to be awoken should the Cult of All Flesh return to the temple), if awoken, should be rolled on this table: http://dndwithpornstars.blogspot.com/2011/09/demonic-attribute-table.html The DM may roll this creature in advance but I recommend having a player roll during the game (to watch the creature take shape). The DM should keep the results of the ability rolls secret. Otherwise the creature should have the following stats:
HD: 12 AC: 0 or 20 Speed: human intelligence: 17
It will be wreathed in a halo of flies. It will be attempt to slay any living thing in its path other than a cleric of the Insect Cult.

Only you could design a temple like this. I love it.

Thanks. Nice layout and production here. Easy to read and follow with implicit visuals.

Things I might add: Backdoor to gardens for increased chance of death by hive demon. and generally more weirdness.

Oh look... it's that time of the month where I wish Zak was making a monster book... and a dungeon book...

And by that I mean that I like monster books and I like your monsters, not "MAKE WHAT I WANT WAAAHHH!!"