Royal Fist Monkeys Are Trying To Kill You 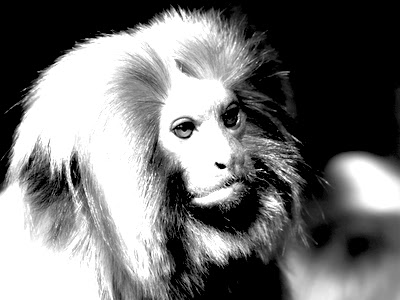 This is a Player Service Announcement.

Royal Fist Monkeys are trying to kill you.

They are small and white.

They have large stone-and-metal gloves on their right hands, encrusted with precious gems.

They are trying to kill you.

You broke into their ice house looking for fun and profit, they have decided you will never leave.

You have observed these things:

They do not die fast.

They know how to use both fire and flaming oil.

Their Royal Fists are capable of delivering one punch doing d8+8 damage. After the punch they bite for d4+4.

You know because you have seen this happen 24 times.

There are many other dangers and wonders in the Ice Labyrinth of Hakleth besides Royal Fist Monkeys.

But you will never see them if you fight Royal Fist Monkeys all day.

-When you're in a big echoey room with a bottomless pit, and Kimberly Kane is like "Hey what's over there?" and I go "Are you yelling that across the room?" and Kimberly is like "Uh, yeah, sure" then be all "NO, NO KIMBERLY DON'T DO THAT! THE ROYAL FIST MONKEYS WILL HEAR US AND CHASE US AND THEN WE WILL BE FIGHTING ROYAL FIST MONKEYS FOREVER AND ALL DIE IN THIS HORRIBLE ICY MONKEY DUNGEON"

-Actually, that's the main tip. I can't think of any others right now.

To Any Other Readers Of This Blog Who Play Google + Games Or Are Thinking About It:

If any of you have characters hanging out back at the FLAILSNAILS Cantina, you have heard the bartenders of Earth-Amalagmated-FLAILSNAILS have started a betting pool on the success of this expedition.

Here's how it works:

You say who you think will survive, who will die, how successful you think it will be that week, you make any other crackpot prediction you see fit.

There are no penalties for extra incorrect predictions beyond the first, so go ahead and make as many as you like.

Whichever player is the most right gets all the gold (and associated xp). If there's a tie, you split it.

Here's the deal so far:

They are in this maze looking for an ice medusa name Moroschka--trying to capture her and bring her back alive.

The Royal Fist Monkeys make traps. They are alerted to the PCs presence. They have 6HD. The last time there was a fracas there was 17 of them.

Other hazards have included an ice lamprey and some kind of emerald ooze. One each. Neither was too much trouble so far.

The core contestants on any given day may include, but are not necessarily limited to...

Mandy Morbid as Tizane Ildiko--5th level Curious Fancy tiefling cleric of Vorn and 1st level Barbarian. Accompanied by her wolf, Ursula. She has recently been reduced to 12 wisdom and has begun hallucinating after looking at a rug.

Darren, who plays a 4th or 5th level Sneaky Laid Back dwarf and tends to show up an hour late, save everyone and then leave.

Connie as Gypsillia--4th or 5th level Sneaky ADD Greedy half-elf thief. Like Kimberly, she is impulsive yet has never died.

There are several other players in the mix potentially, but since all of them either have erratic schedules right now or you can't really find out much about them on this blog by clicking the 'players' tag (or watching old Axe episodes) then I don't think it'd be fair to make you guess what'll happen to them. These four have been taking point lately in most of the recent games.

KK likes to hit shit with an axe and then turn into a werewolf and fuck shit up.. But Mandy is tactical and thinks shit through (from what I've seen on the show and read here).. Tough call between the two.

You talking about KK yelling across a pit reminded me of a player that did the same. Arduously sneaked across a whole room of sleeping baddies, got to the other side and yelled to everyone that the coast was clear. I asked if he really yelled, giving him that chance to backtrack.. He said, "Yeah I yell at them.. Why?... Oh shit.."

It was a fun combat just because the revelation at the stupidity of his statement.

I'm 6th level Cleric/1st lvl Barbarian (because I lost so much wisdom.)

@ Mandy- Lose it via Wisdom Drain? Put a cramp in your spell casting ability :(

By natural temperament I'm into planning and coordination (according to your PC alignment system I suspect I'm sneaky/curious with a dash of fancy), but I can appreciate the injection of chaos from other more impulsive players. Our main monkey melee turned into a clusterfuck, but the scramble to get through the door and barricade ourselves against the RFM onslaught was entertainingly tense.

I'm particularly entertained by how much time and how many resources we spent on taking out only 3 monkeys in as sneaky a way as we could muster. Then with such care and finesse we traversed the bottomless pit avoiding imminent doom whilst dangling precariously from monkey bars infested with slime and mold. Only in the end to have 90 min of crafty game play go up in smoke because KK was bored on her couch and actually forgot we were sneaking...

Be warned @Adam, being fancy will only bring you to the intersection of Face and Palm in the realm of Vornheim.

And this is what happens if you don't find her something to hit fast enough.

@zak- well the rest of the group could offer you up as a sacrificial lamb for KK to hit... Entertaining and everyone lives longer.