I'll Call Him Ed Because I Can't Tell You His Name

I can't tell you his name because 3 years experience shows people--people reading this--will harass his family. I'll call him Ed.

Twelve years ago I had business in...a cold city. I didn't know anyone but Ed's boyfriend.

I stayed at their house. We hung out and watched TV, watched the snow fall. Talked about art, the midwest--which I knew nothing about then. Ed had a collection of cookie jars.

Ed liked my work--he eventually had a stained-glass window made from one of my paintings. I hadn't seen him in years--maybe ten?--when I found out he had one year left to live.

I visited. He wasn't the kind of guy who wanted pity or to talk about the chemo or biopsies or the remaining viable cells. He had lived a life of being the reliable guy and wanted to keep being that guy. The cancer had accelerated his decision to retire but he'd been a very successful lawyer.

So as soon as he's shown me around the apartment--and the new cookie jars. He says "I hear you're dealing with something of a legal situation. I can take a look for you if you like?"

He wanted to do something besides sit around the house and talk to his kids on the phone and wait to die. He said it--plus you could just tell. He read every document, he asked every question, he listened to tapes of hearings, he threw himself into my case(s) whenever his health permitted.

There are things that a lawyer that you're paying might not tell you--because it might involve them getting paid less. Also, just, he'd worked on some of the biggest defamation cases in the country. So, for two years, whenever I was dealing with any big legal decision I'd send it to him and get a second (often third or fifth) opinion. "A judge won't care about that" or "If they said that in that state it's open-and-shut."

He kept not dying. He also kept not wanting to talk about the cancer (I tried because I felt bad he was spending the effort on me) and talk about my case instead.

He called some months back and asked how all the legal stuff was progressing. It was a little bit of a surprise because up until then he'd waited for me to call him (legal stuff involves a lot of waiting for the court to decide to set a deadline to do a thing). I told him. We're waiting, as usual.

A few weeks later Ed's boyfriend (now ex-) got in touch to tell me Ed had died. Ed had gotten sick of the chemo and decided to just end it--after tying up his loose ends.

Looking at the dates, I realized that call was one of those loose ends.

He'd decided to die and one of the last things to do on this planet was get in touch, check in with me, and help however he could--and not tell me he was about to die. He didn't want pity about cancer, he wanted to do what he could to make sure I was ok, that I wasn't being taken advantage of, that my lawyers were taking the tack that made the most sense, that I was suing the right people, that he called all his people to find out what he could about any judge any of them knew anything about.

I don't know why I'm telling you this but the reason I'm still here, the reason I'm still alive is because of about two dozen people like Ed in my life. There was only one Ed but there are a lot of Eds: People who have been going through all the shit that life, Covid and the world throw at people and still had time to stop and go "Holy fuck, Zak, this is fucked up" and buy me lunch or give me the number of a guy they know or just show up and type a thing on the internet and let the other Eds know they're not alone.

I will never be able to repay them because either I die or I will live and owe them my life. I'm not a doctor, I'm not an EMT, I'm not a shrink, I don't have any life-saving skills. I can't do what they've done for me.

I also will probably never be able to publicly say their names and, probably, vice versa. Even if I survive, the people who did this will never stop trying to find ways to harm them. But I wanted to say that I appreciate you, not just to Michelle, Kimberly, Charlotte, Sara, and all the people who can speak out publicly, but to all the Ed's out there who can't. My house owes your house a debt it can never repay but I'll do my best to come as close as I can.

So, in the past few days I posted clips(here, here, here) of Mandy being something other than who she's pretending to be while filming I Hit It With My Axe. Mandy and her goon squad immediately began concocting excuses for her behavior in the clips:

...but she actually comes out and says why she's in a bad mood right there in the footage:

...and says it again:
Mandy Morbid clearly had no problem telling anyone what was on her mind. She did it day and night. We believed her, we did what we could to keep her happy.
You think maybe she was the world's greatest actress and was saying this all because she knew the cameras were rolling? Then why was she writing the same thing to herself: 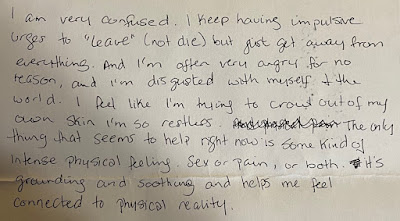 Full document here.
I think it probably goes without saying that you can't accuse someone of abuse for doing what you told them to do or for describing you how you describe yourself. But Mandy may no longer be rational enough to understand that.
If this keeps going, this is what we're looking at: Mandy yelling at a judge that me and all her friends--if we were good people--should've ignored what she was telling us about what she wanted, about what she wanted from us. and about the state of her mental health and we should've instead treated her like the person she would pretend to be a decade later.
Even if we could've known she'd turn into this new person, the clips show that doing anything other than what Mandy said she wanted in the moment would've been scary.
So, complete catch-22.
More footage soon,
-
-
-

So, as shown before (1, 2), Mandy lashing out at people for no real reason was common.

Again a few short clips showing more of it:

Now, again, like many times before, we were able to talk to Mandy about all this and she was in therapy regularly enough to realize this was wrong.
She apologized for the above behavior in an email she sent to her friends and she described this behavior in terms of the disorder she always said she'd been diagnosed with (proof here): Borderline Personality Disorder.
Mandy now claims it was "gaslighting" to agree with her: she claims it was "gaslighting" her to describe her as having BPD and everyone was "gaslighting" her to say she was acting crazy.
But:
This was all footage from our games, but there's a lot more from other sources and in many ways it's a lot more serious. Next time I'll post more video and we'll get into that.

As promised yesterday, here is more video evidence.
If you watched I Hit It With My Axe, some of you may remember a plot twist:
The group's first quest was to hunt down Eshrigel the medusa's daughter. They found someone in a mask (a guest star) on their way and then, int he middle of a desperate fight, she took off the mask and revealed herself to be the medusa's daughter by partially turning the bad guys to stone.
Here's how my ex- dealt with that. The clips are short but it helps to watch all three because it escalates very quickly:
Obviously I don't post this to show Mandy not appreciating the plot twist (or me) but it's an example of how completely out of proportion she took things--one surprise and she decides, in the middle of a shooting day, to quit the show.
As you may know-the show did go on--Mandy changed her mind because, as demonstrated yesterday and in this post before, she used to have self-awareness about her mental health issues and how they could hurt other people.
Afterwards, when we talked about it, she admitted the real reason she freaked out was that she felt like the guest was getting more attention than her. Literally.
We were scared of Mandy, as Frankie and KK point out in this during-game-interview from the same time period when Frankie's asked about a moment in a game where her character temporarily got ensorcelled and had to attack the nearest person:
"...I tried to remain neutral so as not to conflict any real life relationships."
Anyway, more video tomorrow.
-
-
-

During this whole legal thing I knew sooner or later that, if Mandy didn't get therapy and instead dragged this out, sooner or later I'd have to go through all the footage we'd all shot over the years.

I resisted doing it basically because, well, we were together for over a decade and there's a lot of it and watching all the footage is painful and when it isn't painful its really boring. But it also shows that Mandy wasn't in any way the person she's pretending to be, so, here we go.

These 4 clips are short.

Here's Mandy and I shooting a session recap for I Hit It With My Axe.

In case you think this is just her lashing out at me, here's how Mandy treated the other girls while playing D&D:

This kind of thing from Mandy was common and most of the women in the Axe group testified to that fact.  Here's one going into extensive detail with me if you haven't seen it.
Why did we all put up with this?
Well back then Mandy was self-aware about her mental illness and how it affected people, and she was once capable of seeing how she's acting and apologizing:
...she isn't any more.
After a decade as a model and stripper and porn actress and whatever, she left all the people in those worlds behind--mostly because they knew she was lying about me.
Apparently her only friends now are gamers or people she's cultivated mostly online relationships with. Last I knew, she was even dating one of the dudes who used to harass us, a former gamer guy who worked at Onyx Path.
She's now completely insulated from reality--as are the folks whose main source of information on this stuff is Mandy herself. She lies a lot and there's a lot of conclusive proof of that. She even admitted to perjury in court.
There's a lot more where this comes from and a lot of it directly contradicts claims she's made under oath. I'll post more video tomorrow.
-
-
-