So I was Googling, right? And the autocomplete was on. I was like "Dungeons and Dragons is" and my computer went ahead and finished my sentence...

Well Internet what do you think of...the devil?

It would appear my computer thinks D&D is worse than the devil.

So, wait a second, internet, the artist responsible for your four favorite movies (Four? Yes. Have you seen THX 1138? I think you'd like it.) is a hack? 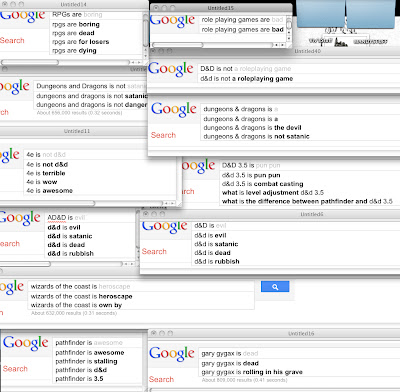 Well, that's certainly a...lot...of opinions you have there on D&D. What about other games? 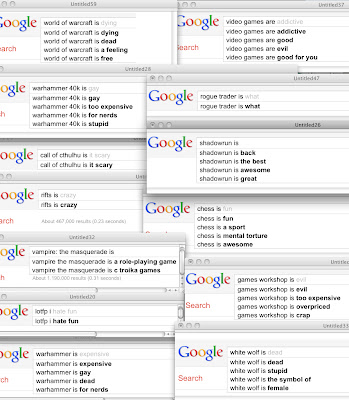 Well Internet, you sure like Shadowrun. (Though you're so vain you probably think it's about you.) And it's nice how Vampire got off with "Vampire the Masquerade is a role-playing game". Probably the nicest thing I've ever heard you say about it.

What else is on your mind, Internet? 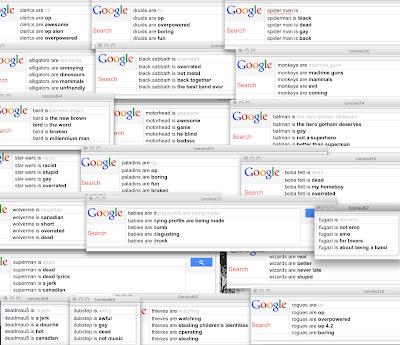 I didn't realize there were so many Canadians. Though I did know alligators were unfriendly. What do you think of crocodiles? 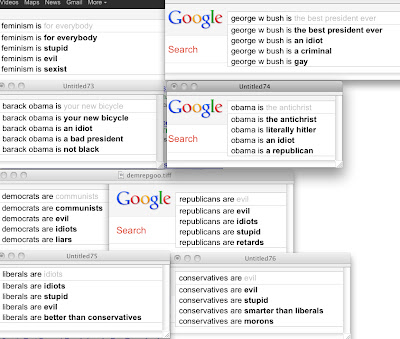 My bicycle and Hitler? I think you're just saying shit to fuck with me. Is there anything you just have a straightforward opinion about? I mean, besides Shadowrun?

To be honest I haven't seen the new one and can't remember the last one too well--I don't like looking at guys' nipples.

Anyway, what I want to know is: how did you get so fucked up?

Well....yeah....but, still, that seems a bit uncharitable--I mean, what makes you think you know so much?

LET'S ALL FIGHT ABOUT IT ON THE INTERNET! YAY!

I must admit that I laughed.

1) I believe "op" stands for "overpowered". I had to think about that for a minute. Maybe all you OSR guys knew that instinctively, though.

Yeah, Google is full of weird stuff. You can spend all day finding stuff like this (I find Star Trek names to be funny).

The best ones to search for, is:

If this is the first glimmering of the 'singularity' (machine intelligence), then I am scared and we are screwed. Time for a drink...

The Oracle has spoken. Please leave your offerings at the entrance of the cave.

Google seems to be obsessed, also, with calling things gay which can neither be happy nor possess any gender. Perhaps it means these things are joyful. I will re-read with that interpretation in mind.

Only thing it needed to say about it, really.