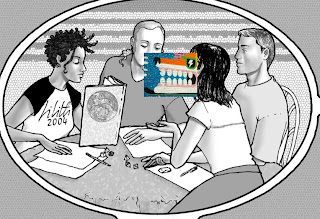 "In the high fantasy quests of authors like J. R. R. Tolkien, or the larger than life swords and sorcery of Robert E. Howard, Fritz Leiber, and others, heroic loners or small groups of rebels, outcasts, or eccentrics perform great deeds and go on quests to obtain power and glory or to protect the world from some threat.

"In the mid-1980s, a generation of new fantasy authors - Diane Duane, Mercedes Lackey, Tamora Pierce, and many others - wrote fantasy novels different from any that had come before. The main characters in their novels occasionally start out as loners and outcasts, but find a place in society, generally as members of some prominent group or official organization that goes on exciting adventures to protect ordinary people from danger.

"Developing a sense of belonging and finding comrades are central features of these novels. Most of these novels are in series, and by the end of the first book, the main character has usually found a community where he or she belongs. Many of the character’s adventures involve either becoming a more fully integrated member of this group or protecting the group from harm...in all romantic fantasy worlds, nature is a positive magical force, and anyone who protects it is on the side of good."

"Slaai communicate in enigmas and koans through their crystal balls (with ESP and clairaudience as standard), and can easily overwhelm your tiny monkey brain with mind blasting telepathic insights into their ancient cosmic frog perspective (save vs. death, fail = dead, pass = terror for 1d6 turns)." 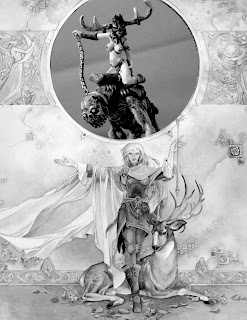 So if you don't know, Blue Rose is a d20-derived hippie version of F.A.T.A.L.--that is, another example of the distasteful and disastrous things that happen when the "fantasy" in "Fantasy RPG" is interpreted as meaning "wish-fulfillment" rather than "invention".

(It is also just all-around baffling. Here's a suggested adventure seed--the whole thing, verbatim: "51. A daring thief steals from the wealthiest people in the city". Um...Good? How is that an adventure seed? Why are there rich people in a progressive utopia?)

Small But Vicious Dog is a hack designed to make Basic/Expert D&D emulate Warhammer Fantasy Role Play which is nowhere near as boring as it sounds. Which, well, how could it be? Hacking a third-generation D&D-derivative to match the slightly different rules of a second-generation version of D&D may not sound like a terribly ambitious way to spend a weekend but Chris Hogan rips into his task with terrifying verve.

SBVD is a rules hack, sure, but more than that it's a creepily well-written running essay on all the differences between D&D and its transatlantic counterpart (in micro) and the grimdarkbrutalLOLweird take on fantasy vs. TSR's more catholic let's-just-make-this-game-about-anything-less-boring-than-the-midwest take on the middle ages RP.

Anyway the point is--obviouslyDuh--Blue Rose and Small But Vicious Dog need to be one setting.

The DIY D&D Google Plus Brain Trust has been consulted:
(names obliterated to protect the abominationists involved)


"Thought for the day: Blue But Vicious Rose."

"Romantic fantasy with chaos attributes or Mercedes Lackey for cuckolding fetishists: You Can Have Both."

"We accept all philosophies in The Magical Kingdom of Chaoldea (*..sparkle sparkle..*)"

"Elsewhere, my zebra skin and long nose were shunned but now I finally fit in (weeping, hugs pegasus with oozing wounds)"

"Now I'm picturing the magic deer walking upright on scaly ostrich legs, dispensing wisdom from a tiny, parasitic faun that lives in its chest like the little guy in Total Recall."

Tell me that would not be awesome: not just your typical "something's not quite right in Stepford Camelot" set-up, but one where just every citizen is oblivious to the fact that all the symbols are always pointing in the wrong direction.

There's like an eight-gulleted Negaboar vomiting on children in the streets and ripping their ears off and wearing them like legwarmers and everyones' just like "He's just expressing himself!" The kingdom's main export is tediously optimistic NPCs found in random oubliettes. "Oh I'm so glad you found me! I've always believed the human spirit was powerful enough to triumph over any adversity!"

Do the Chaoldeans have secret plans to spread their utter lack of prejudice and imagination across the entire continent or is it just a very disturbing place to go buy a unicorn-hoof talisman? Hey, you're the DM, it's up to you.

Soon to be followed up by Small but Vicious Dogs in the Vineyard.

That top picture is amazing. I like to imagine what the guy on the right is thinking.

"I can't believe we're fighting another greedy mill-owner trying to drain the nixie pond. Wait, no, not fighting, 'negotiating a mutually-beneficial settlement'."

ps. If this turns into a G+ game, I'm claiming the character name 'Lord Munterby.'

I assumed he was thinking "That's fascinating, I've never had an orgasm either!"

My alternate take was:

"Maybe if I write a poem about how rad Ani DiFranco is someone will finally touch me on the dink."

"...unfortunately it's impossible to tell who..."

"51. A daring thief steals from the wealthiest people in the city". Um...Good? How is that an adventure seed?

I'm guessing Blue Rose doesn't work this way, but to me that suggests vicious, indiscriminate retaliatory crackdowns and elaborate, Leiberesque anti-theft precautions from the city's nobility.

While mechanics can be more complicated, thematically converting non-WFRP settings to WFRP is much easier than it seems.

1) Pick an ostensibly good organization.
2) Add the qualifier "is secretly operated as a front by a Chaos cult".

Examples:
"The Knights of Solamnia, while ostensibly dedicated to good, are secretly a front for a cult of Khorne".

"The Shire, while seemingly peaceful and pure, is secretly a front for a cult of Slaanesh".

"The Corporation for Public Broadcasting, while seemingly the leading producers of educational programming for adults and children, is secretly a front for a cult of Tzeenitch."