So it's the vampires' half of the initiative, right?

Vampire A comes down as a bat, grapples the party's wizard from behind. Pulls the wizard away hostage style like "move and he's dead".

Vampire B moves with them, taking an overwatch action, like "anybody move and you're toast."

Party's thief has an invisibility ring, sneaks behind Vampire A, garottes him from behind, not killing him but preventing him from attacking. So:

Of course then bodyguarding Vampire B takes his snap action to grab the thief from behind. So it's like:

But then it's still the players' side of the initiative, so then the party's fighter runs up behind Vampire B and garottes him. So they're all in a horrible deadly conga line...

And it's time to roll initiative again...

Well, first, why do you care?

Gods are clusters of concepts. They are, in fact, clusters of most concepts deemed useful and interesting to all human cultures up until the present day. So...they are pretty good ways of talking about mood, genre, themes, tropes and other things you need to write an adventure or detail a place.

Well let's see what you can do if you know that...let's say I roll randomly and get "Diancecht"--who the fuck is this? Or where?

From this information plus my trusty more-useful-than-it-looks Deities and Demigods I can extract...

1. Weather and landscape: Irish
2. Local flora: Oak and mistletoe. (Most gods also have a sacred animal listed, the Celtic gods do not. Most are pretty evocative: ocelot, monkey, raven, lizard... Obviously this represents the most obvious local fauna.)
3. Highest level NPC around? Clerics and druids (Dianecht's highest levels are in these)
4. Other likely NPCs?  Fighter, magic user, bard
5. Peoples' basic disposition? Lawful good
6. What kinds of schticks happen around here (examining the god's description)? Healing, resurrection.
7. Weird fact: One thing clerics of Diancecht can do as penance is take a pilgrimage promising to heal all things knowing hurt along the way.
8. Weird fact 2: His power doesn't work on the decapitated. (That's an adventure seed right there: someone's walking around a battlefield chopping heads of corpses when the PCs show up...)
9. Weird fact 3: He is hardly ever attacked because he will heal friends and enemies alike during battle. Let's assume local clerics do the same.

Vornheim, my campaign's central city, started when someone wanted to play a paladin and needed a god. Off the top of my head I said, "Ummm, well the default god is Vorn, grim grey god of iron rust and rain". The rest kinda wrote itself.

You could just go page by page through Demigods like a DM's alamanac planning adventure after adventure.

If you need to know whose domain any given hex, city, dungeon or other geographical area falls under, roll digits like this: d4 minus 1, d10, d10

The (totally random) Barrens of Woe

The Barrens of Woe 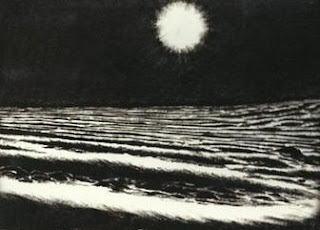 I generated these hex descriptions by starting with  Ramanan Sivaranjan's Carcosa Hex Generator, then filling using the "find/replace" feature on a word processor to change the Carcosa-specific factions and monsters to fantasy ones. I then filled out details of each hex (including the names) with automatically generated stuff from Abulafia, adding in a few connections here and there. It took about an hour and a half altogether.

Because of the effort put into each one, these don't really make sense as a hex-by-hex description, they are more "the 20 most interesting hexes in the area" unless the hexes themselves are very big (big enough very different kinds of cities to be in nearly adjacent hexes). They could be distributed into a less eventful hexmap/

When there's something that would be visible from a distance, it's marked with the word "landmark".

16
Landmark:
A fortress of 156 lizardmen cultists carrying whips ruled by "The Small Dragon," a 14th-level human witch. The witch's research have left her disfigured: she has the scales and tail of a lizard, and is cold blooded.
25% of the lizardmen are berserk warrior-types with 2hd more than the rest and +2 damage. (These may also carry 2-handed weapons.) and their witch raises dead to fight with the host as zombies when they fall.
17
4 librarians camp along a dirt road. They are under the control of a demilich, which they are transporting to Hex 19.
Settlement of 281 gnolls ruled by "the Death of All Graces," a insane 11th-level necromancer. Therein 12 southern elves (drow) led by a putrid smelling wizard (AC 18, MV 120', HD 3, insane) are in the middle of casting Manifestation of the Putrescent Stench. The wizard is armed with a bastard sword and wears a bright orange robe.
Landmark:
In the center of the settlement lies the wizard's tower:
The Cyclopean Spire of Amar, who is primarily concerned with Necromancy. The main entrance is shaped like a demon's maw. Generally constructed in Cthulhoid, tentacular style, the tower contains the following levels: Three Levels: the wizards private chambers and the library, plus Igor's chambers – manacles, rough clothes, foulness.
Features:
-Fey creatures speaking riddles and illusory images with phantom sounds.
-Exploding objects.
-Oh no, you knocked that one thing over and now a secret door has opened.
-At least one room is full of striped objects.
-Abortive Experiment: Half-ettercap, half-drider (spiderman).
-In the Dustbin: Empty bottles of perfume.
18
A water hex: Globes of light move beneath the surface of the water.
Landmark:
The Drifting Isle. A Were-rat hangs limp from a tree. He is pierced head to toe by spikes. Two pikes lay near his lifeless body beneath a castle containing 65 snow leopard men led by "the Claw of Nine Winters," a rational 9th-level Fighter. He controls a demon (AC 18, MV 120, HD 13, insane): a blue arachnoid with two red eyes and a toothed mouth. A magic dagger can be found in its belly.
The castle contains the following rooms: waiting room, map room, closet, robing room, solar crematorium, weird alien birthing chamber, amphitheater, and a gallery.
19
5 Frost Giants hunting.
A mystic circle in an ancient amphitheatre, covered in bloodcolored mold.
20
This area is plagued by a horde of goblins They are ruled by The Invoker of the Wolves an ettin, one of whose heads is schooled in the mystical arts and mystically joined to the ettin in Hex 15. They are headquartered in a ruined monastery. Most carry a net of some kind.
_____
The following Abulafia generators were used to make this stuff: 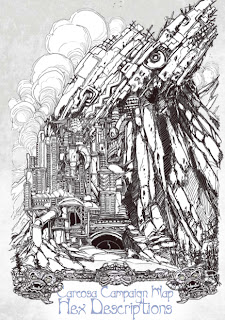