So Jeff was like ok Zak you have your thief and your talking dog that can talk because he sat in the chair that maybe raises your ability scores or maybe makes you goo and it raised his intelligence and which is named Abe Lincoln Vampire Hunter because of how he was named after a guy on the internet who..(ok well that's a long story, anyway)...ok point is anyway you are going down into the Caves of Myrddin with a few newbies who have never been.

So we did and didn't really find anything because we mostly spent time looking for vampires but found dead minotaurs instead but then so one of us decided to take a dead giant playtpus beak and use it as a fulcrum to steal the talking-dog chair and slide it away on dead snakeman bodies which didn't work and we got like no experience points that day.

However the upshot was when we went back to where the one guy left his donkey it had been all sucked by vampires. Aha!

Before returning to the Caves, Blixa would like to consult a sage:

Oh sage, how long must one give a donkey nothing to drink but holy water
before the donkey's blood is saturated with it?

And Jeff is all:

Sages are hard to come by without considerable travel and expense. However, you can consult the Abbot of the monastery, who will talk to the elder brothers about the issue. They suggest that for best results start the process after taking the donkey to mass on a Friday, then have him drink a vial every day at breakfast for three days, then on that Sunday have the donkey attend mass. He should be good to go for the rest of the weak, providing he doesn't commit any serious sins.
You should donate at least 100gp for the advice, one of the brothers explains to you rather shamelessly. Getting a donkey in to mass will require at least another 50gp in donation/bribery.

So I shelled out and the ass saw the angel and all that and then it's like the next day in real life and I am working and I see this thing pop on the Google + :

Because Jeff was supposed to be going to this Nightwick Abbey dungeon but that didn't work out so then he started this game at whatever I'm tired in the morning and I was like ok Abe so then I get there and look at this 2 more newbies.
And I say: Gentlemen. I have a plan. Sit with me and watch a donkey and wait for vampires, first level guys. 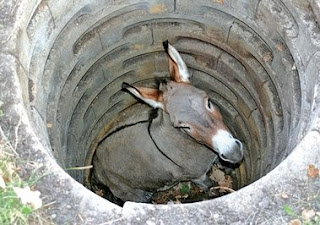 And they were like yeah. Because of there's a reward.

So then we did it and then there's not just two vampires that I expected but four whole other different vampires including a Gilligan one and a Tattoo from Fantasy Island one (who bit the donkey) and I was like man a lot of vampires and then rolled a four so missed and Jeremy rolled something low but then our level one wizard caught three vampires in his holy-water-soaked net and then he threw a bucket of holy water on them and then I disintegrated one (long story) and so there was just a Gilligan hat and treasure map left but two of them escaped because they were fog.

Then we followed the map and got a magic sword.

Then we went to town and were like Drinks on us! And rolled on that and got in a fight and lost three hit points but man you should've seen the other guys because one was married and one was inveigled in love and one was a pig. 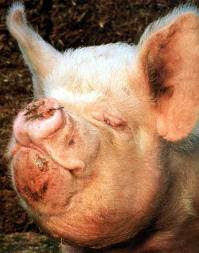 Then the guy who was all supposed to be running a dungeon got his internet working and so we went but then Boner the vampire-killing-helping thief was a pig but I was like come on with us anyway pig since you have a map and we fought zombies.

Also it was hard because it was made of geomorphs so the rooms were all where are we.

But anyway the moral of the story is that even in Lamentations of the James Raggi Wants Your Character Dead Fantasy Role Dying if you're fighting zombie on stairs then a talking dog and a smart pig are actually more useful than they might first appear because guess what are zombies coordinated? No they are not and they trip a lot.

So then after all that I had to go because I had to GM and my players were like hey and I was really tired because I had been up all night in dungeons-of-opportunity and then the girls were going into The Ice Labyrinth!!!!!

So first they chased down a white leopard man who was following them from last adventure and they were like he's our hogtied trap tester now and sure enough there's a trap and they shove him in and yep there's a pit with mastodon bones and a Royal Fist Monkey trap.

So then they fight the white monkeys that climb and hit with jeweled monkey fists. Then they went more into the dungeon and were like oh there's an alarm idiot tied up and the idiot starting howling and calling the monkeys so Mandy shot him and then all the monkeys were clambering forward. 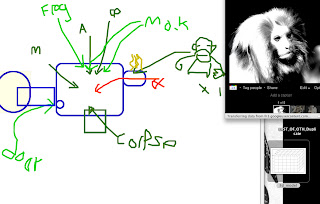 So trouble happens and I roll d20 monkeys are coming...17. 6 HD each. With Royal Punching Fists.

Adam showed up at some point and he only had a Type IV character so I was like "whatever, we'll do a quicky conversion" but his crazy animunchkin sleep spell still only caught 3 then Kimberly Kane hucked a lantern at them.

Now I know some of y'all have some modernist notions about lanterns not making particularly effective firebombs but I figure: ten foot corridor, 17 monkeys, 3 asleep. That is a lot of fur in one place is what I figure. So now many of the monkeys are alight.

Mandy summons some monsters. Frogs. Then summons again and gets...roll...fucking fire elemental. So there is a lot of monkeys on angry fire hopping fighting frogs and 11 are on fire but our heroes remain surrounded with only a cul-de-sac and I had to sleep which reminds me I should calculate their xp.

But so anyway I wake up the next day in Glorantha because Runequest and I was like Barry Can I Just Use My Stormbringer Guy and he was like No You Are A Primitive Tribesman! And I was like fuck I better learn this magic system because jesus look at this strength and dex.

So then the other two primitive tribesmen were pretty much catching deers a lot and rabbits and getting bronze stuff from dwarves while I was just like Man, please spirits of the mountain guide my arrows which I didn't even shoot all day. And my guy's Size was 6--did I mention my guy's size was 6? SIZ 6 means you're a Runequest midget.

Anyway so then we went around and met lizard guys on birds and they were just like Hi and then we told people and then we got captured by the Bald Boar tribe and they sold us to someone else who tried to read our mind and then this chick tried to poison Arcadayn and I was in the stables with the horses and I was like WHAT DO YOU EVEN DO IN RUNEQUEST BECAUSE THIS PLACE IS CRAZY AND I'M PRIMITIVE and then we tried to escape and I bit a guy on the leg while Arcadayn rolled a 100 (which is bad) for like the fourth time and fell off a wall and they just decided we were crazy and sent us to some other lady who gave us porridge. I hope I get my stuff back.

This read like 'drew plays dungeons and dragons' even though I don't think drew ever did. And that's a good thing. The 'reading like drew' is a good thing, not the 'drew never played dnd as far as I know' thing.

I had a massive amount of fun last night Zak, and you were a big part of that so thanks.

weird coincidence--Kimberly Kane woke me up at 4 in the morning sending me photos of her at somebody's wedding with Grant Morrison.

I think it might be the best thing to come out of the blogosphere.

Stories like this make me wish there was a kind of repository for great game anecdotes. Moments of Glory, craziest shit you ever saw, or just amazing session reports like these. Because I could honestly read that crap all day. I often come away with something good to steal and when I don't I still have the inspiration to go out and game more awesome.

Long Live Constantcon! Finally, it's like we're all in the same basement.

Wish I could make Jeff's game on a weekly basis, but I'm already working out the next Friday I'll be off work and able to attend.

Good stuff!
Loved this part:
"And my guy's Size was 6--did I mention my guy's size was 6? SIZ 6 means you're a Runequest midget."