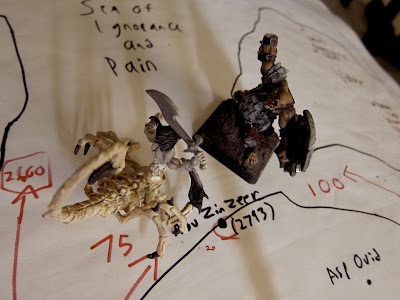 The forces of Gaxen Kane march on Archbishop Sarpedon, who has sent a mighty host north in return, the dwarves of Lanthanum Chromate rolled a 02 against some NPC pirates in the first major battle of the war, but the rest is shrouded in Fog and Mystery.

Nevertheless, some diplomatic correspondence from Slow War has reached the general public, allegedly due to one Sir Manning, alleged thrall of one Lady Germanotta...
-
-
-

"Greetings from ______. We present you with this communication from the Penumbral Princess Chimera Moon"< revealing  a cage with a gift of a Tarantella: a bunch of minstrels sewn together into a horrible spider shape> " For maximum potency of the wisdom bringing drugs of the liver, it should eaten raw and torn from the Tarantella while it is alive and still trying to kill you"

Cool. Send a cake in reply. Made from liver and spices and surprisingly sweet.

Second hamper with an onyx spider connected to some unbowed ribbon at the bottom, covered with wooden and woven ornaments of many fantastic creatures, people and buildings. At the top is a jar of warm, golden sand.﻿

_
-
-
-
-
A man chained to a little boat, at the bow of which is an oracular pig arrives and claims he has a message from _____.
-
-
-
-
___
(rumbling) IT IS CALENDRICAL. AWAKE Attentiveness Plausible HECATON CONFIGURATION : I AM THE FATHER. I AM TIME. Patience FROM MY MOUTH THE EGG. THE EGG IS TIME. FROM TIME A VOICE. THE VOICE IS WITHIN THE EGG.

(escorted by utterly armored and fur-cloaked warrirors, an assembly of hooded monks bring forth a human sized egg on an ornate litter. the egg is struck with a platinum hammer. there is a chime of sublime purity, followed by three phased echoes. the egg cracks. from the egg spills a flood of tar, containing a nude, twitching figure.)

FROM THE EGG, SLOWNESS. THE SLOWNESS IS TIME. FROM TIME, A CHILD: ЇАЊОС́. THE CHILD IS THE FUTURE. Time Offset redacted

(the nude figure wriggles and chimes)

A monk translates. "His centipedal immensity is self-satisfied that your honored subcollectivity arrives at the accordant time."

A different monk continues, "Please reiterate your recognized agenda for recorded posterity. Forms in quadruplicate are to be completed hence."﻿
_
-
-
-
-
Responsibilities of _______
1) The _______ shall appoint a Seer to perform for ______ divinatory rituals calling on the Demon Princes of the Surface Slime, whose scummy film washes upon all shores, composed of the accumulated evils that drain from the earth.
2) The ________ is allowed to keep one of his ______ in order to ease the observation of these divinations.
3) No denizen of ________, even the ______, may call the Cruel Sovereign by the same title twice in the one day.

We definitely should not form an aggression pact instead, as ______ wishes to become invested in the wars of everyone.﻿
Know that _____ has a quarrel with you and wishes to be intimately involved in all of your affairs, and believes that friendship is impossible between us, even if the past.﻿
Then it is not settled. Contrariwise Goblinish anti-talk makes thing astonishingly clear.

Military support is necessary. _____ merely needs to not tell _____ when threatening troops movements are detected and ______ will share information from all of his spies and those of his allies.

Additionally, this agreement is not a secret.﻿

Your lack of fluency in the Goblin tongue brings us great sorrow.

Bad.  Bad.  ________ will not agree to such a proposal, and may never decide to send troops if _____ becomes bored with peace.﻿
_
-
-
My spies have intercepted a transmission which may be of value to you. At this moment, it is given freely, as both powers involved are distasteful to me.

But I hope you will remember us in ______ should an opportunity to do us a reciprocal kindness arise.

Reply: Yeah, been a lot of shit stirring going on already, ____, no one can trust anyone already. Not a matter of who will betray you as, who won't and not if as when.

Nonetheless, I, _____ am an utterly and completely straightup and honest geezer of impeccable moral standing, kneeling and lying prone on the floor.

I take the information on board with thanks, and if it turns out to be bullshit, I'll gut you and toss your liver out for the crows. Sound fair enough?﻿
-
-
- 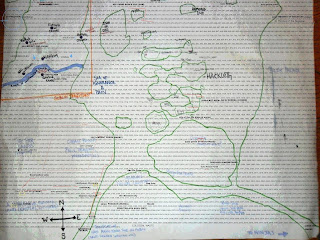 
Want someone to play D&D with ?  Or any other game?

If you wanna find someone local to roll with put your name, location, and preferred games here.

Dennis Higgins, Eastern Long Island -- Make me an offer... I play too many games to list. ﻿

Edit: Call of Cthulhu. I don't know why I forgot that.﻿

I'm also down to DM all but CoC and WFRPG.﻿

Tony Dowler, Seattle. Anything reasonably close to OD&D will be accepted.﻿

Noah Marshall, Oakland, CA.
Currently running hacked up ACKS, but willing to run anything OSR, and play in anything. Playstyle is verycasual. Drinking is encouraged.
Usual play group is a pretty tight group of old friends, but everybody is welcoming to strangers.

EDIT: Oh yeah. I will run Dungeon Crawl Classics Dark Sun if you let me. Be careful.﻿

+tony dowler if you want to game with someone awesome, get in touch with +Brandon Vaughan. I've played many games with him and he rocks. ﻿

I've been converted to old school D&D in principle but I haven't really played much.﻿

KangaRat Murder Society Founder, will give most games a go, and more than happy to show new gamers how to play. ﻿

Joey, SF Bay Area (will probably end up in Oakland), will try most anything, but currently wanting to play WFRP 1 or 2e, Call of Cthulhu, WH40K RPG, Elric!, After the Bomb, and Marvel FASERIP. (I missed all those back in the day).
+Noah Marshall  let me know if you get the DS DCCRPG game or something going, I sadly left my in-person group on the East Coast.﻿

+
1
2
1
Thank you, +Dennis Higgins!!! The recommendation from you speaks volumes.

Would love to run or play any type of CoC as well!﻿

Mark, San Francisco, CA I'm trying to get a new gaming group together. I'm open to being either GM or player. I live the Central Richmond district and I'm willing to host. I'd like to play Savage Worlds, OSR (LotPF), DCC, Numenera or Mutants & Masterminds, however I am open to other games as well.﻿

+Brandon Vaughan +Matt L. Sounds like we have something to talk about!
﻿

Shawn Sanford
Des Moines, Iowa
Looking to put together a group for OD&D and other old school RPGs.﻿

Aimee V, also in Oakland with +Noah Marshall's group playing that old school hack and slash. I like playing Dungeon World but not running it...﻿

I'm up for anything, though I'd be especially interested in CoC, ORE, or rules-light games.﻿