Note: If you voted to hear the Vampire story, it's still coming in early May, don't worry.

-The Alien and The Predator are both interesting monsters.

-One reason Alien is a better movie than Predator is it found reasons for the cast to talk about the interesting monster and observe its behavior. After Cain dies, like 50% or more of the dialogue is in one way or another, finding out about the monster, explaining it ("using the air ducts", "Its structural perfection is matched only by its hostility.", "big as a man").

-What dialogue isn't about the monster is about The Company's plot ("crew expendable" etc.).

-Simple formula (Lovecraftian even)--create an interesting monster and then the story is mostly just explaining how it's interesting.

-Predator on the other hand: how do we know its an alien? First scene we see its space ship. How do we know it has only thermal vision? We see through its eyes.

-Showing not telling doesn't work here because it leaves the characters almost nothing else to talk about or do--except the same things they'd do in any other non-monster action movie: I'm worried about murdering! I'm not! How will we accomplish murdering? Yeah, they got betrayed by the CIA, but it's so not important to anything and Carl Weathers (the Ash figure, the betrayer) gets killed by the Predator, so that plot resolves itself without anyone having to confront him or make a decision about it or act or anything.

-A problem with all the later Predator and Alien movies: instead of interesting or difficult characters being dealt with by the other characters (as the crew deals with Ash in Alien) they just get killed by the monster. We realize, at some point in every later movie, that this is a slasher formula and none of the interpersonal plot gymnastics matter. Ripley matters, that's all, because Ripley will, in one way or another, survive.

-So what does matter (besides the quality of the kills)? We want to learn more about the creatures.

-This, I think, is what really disappointed everyone most about Prometheus--the whole beginning was a classic Hard SF set-up: we were going to Learn About The Universe and then as soon as we get to the big mystery (What the fuck was that thing in the...chair? in Alien?) it turns into a slasher movie. No, we are not going to learn anything else, the only question in a slasher movie is: how will they die? Not well, it turns out. Also he looks like the Michelin man but that's a whole other post.

-Anyway to retrieve the thread: Interesting monsters. The genius of the first Alien--and nearly all the best parts of all the later Alien and Predator movies--is it turns learning about the interesting monsters into the plot.

-The technique: rationing out the information on the interesting monster scene by scene, piece by piece, kill by kill.

-Failure means: wasting information, wasting kills, and, by extension, wasting characters. Letting the monster chew through the cast before the cast gets to chew on the monster.

-Again, Lovecraftian: the scenes in The Call of Cthulhu where we learn about Cthulhu are more interesting that what Cthulhu actually does at the end (with the Swede and the boat and all that).

-It's all a slow tease, a show whose content is slow revelation. It's why there's this curious deflating effect when you see a Wiki full of information on the creatures, like everything fun is mashed down into a statblock. The Predator tribe is called the Yautja? Did you know that? I didn't. Somehow I wish I still didn't? I want the mystery.

It's like looking at the lyrics to your favorite song all typed out. "Oooh, ye-ahh, baby" I mean yes that's the words but...it felt different in the song.

Note on The Vampire 5e Story

In case you missed it, I asked readers to vote on whether they wanted to hear the whole story on Vampire 5e--I set the threshold at 100 votes and reached it, so I will be getting to work on that, collecting all the receipts etc.

My plan is to have it up in early May, just so you know.

Here's a foldy map I drew: 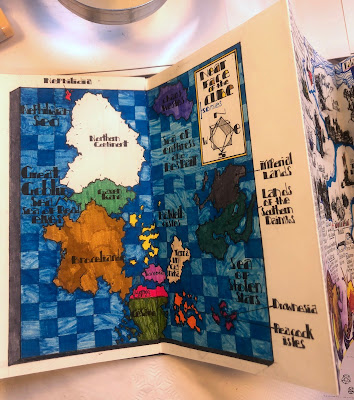 Now It Can Be Told--If Any of You Care

So, two of the most aggressive harassers online--people responsible for more hate directed against me and the other D&DW/PS crew since 2011 than almost everyone else put together--got cancelled yesterday: Olivia Hill and her spouse, Filamena Young.

Olivia's girlfriend claimed that she was abusive, lied all the time, and played victim constantly to escape responsibility for doing fucked up things.

Anyway that means an even fifteen of the folks who were involved in the smear campaign against me have themselves been outed as abusive. I have a question for readers, right after the list...

1. Olivia Hill (former Vampire et al Onyx Path designer--girlfriend says she lied all the time, is abusive, and plays victim when she's caught, which is exactly what I've always said Olivia does)

3. Brandon Dixon (Swordsfall, called out on twitter as a creep by a fan)
4. Adam Koebel (Dungeon World/ Streamer, caught on tape being creepy)
5. PH Lee (Bliss Stage, Hot Guys Making Out, storygamer, cancelled for their edgy games--after making fake allegations about rape)
6. Ben Chong (various "games about relationships, storygamer--admitted to being a sexual abuser)
7. Sean Patrick Fannon (Savage Rifts--admitted to being a sexual harasser)
8. BlackHatMatt (RPGnet moderator--accused of rape)
9. Tyler Carpenter (Battletech, storygamer--admitted to sexual harassment)
10. The folks at Green Ronin (who either committed sexual misconduct or handled it poorly in the case of C.A. Suleiman)
11. Shoe Skogen (my ex's friend, outed as an alleged abuser after being made an OSR discord mod as a reward for harassing me)
12. Elizabeth Sampat (storygamer, ex-girlfriend and enabler of Gamergate-related sucide Alec Holowka)
13. Jared Cassady aka AuraTwilight aka Paimon Prowler (ran the OSR Discord, outed as an alleged abuser by fellow greaser furry hypnotism enthusiasts I am not making this up I swear)

15. Luke Crane (Burning Wheel, Head of Community at Kickstarter, stepped down for helping Adam Koebel even after he got cancelled)
Olivia and Filamena finally being exposed for what they really are makes it safe(r) for me to tell a part of the RPG story that nobody really knows yet.
However, there's another problem and that's: it's possible nobody fucking cares. I got cancelled because people believed things without evidence from "people they trusted"--even when the "people they trusted" turn out to be liars and abusers, nobody seems to connect the dots.
So, I will only tell this story if there is unusual and atypical evidence that some of you out there actually care.
If I get 100 comments from a 100 distinct accounts (none of them banned) on this post, I will tell the whole story of what happened with Vampire 5e--why it turned out how it did, why it was treated by Paradox the way it was almost as soon as it came out, why the launch didn't come out as planned, what went on behind the scenes with me, Kenneth Hite, Martin Ericsson and everyone else and how many online jerks were actually involved. I have never told anyone this and only the people who worked on it know the whole truth. And I have the receipts.
Vote if you care.
-
-
-

Email ThisBlogThis!Share to TwitterShare to FacebookShare to Pinterest
Labels: etc, etc., People Who Harassed Us Shockingly Revealed To Be Not What They Seem Yet Again
Newer Posts Older Posts Home
Subscribe to: Posts (Atom)