I listen to a lot of comics podcasts--here's a paradox you're always hearing on there, from the savvy comics-reading grown-ups.

Them: "So tired of the same shit on a different day. Why isn't anything new? We want something new! So excited when someone's trying something new!"

Also them: "So I picked up so-and-so's new (Spider-Man/Superman/X-Men/None of those) and, come onnn, who wants to read this? I mean, on page one (something that seems maybe weird but benign to me happens). Lol. They don't have a handle on the character at all!"

Do people really want the same thing over and over? Or do they want something different?

While the question goes far beyond comics, I found the most cogent answer in an issue of Batman.

Writer James Tynion IV has given The Joker (who is still, 70 years on, fighting Batman) a daringly oblique scheme to fuck with the Caped Crusader's head:

He will make the citizens of Gotham City all watch The Mark of Zorro, the movie the Wayne family was on its way out of when Bruce Wayne's parents were killed. 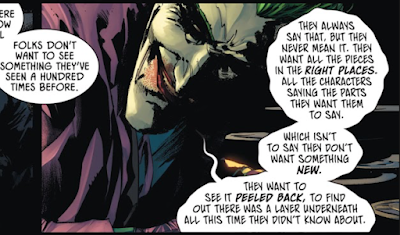 And that's it right there.
He's totally right--that's what all this is about isn't it?
You read something, see something, play something as a child and it's compelling. And it keeps being compelling, even when you grow older and think you can see right through it and don't want it to be compelling.
And when you go back to it you want to strip back a layer and learn why it was compelling--and you want to be able to experience it all over again without it feeling repetitive because that peeling back and learning makes it new. It ceases to be nostalgic at that point.
This is what all the D&D bloggers and RPG bloggers and alternate-take RPGs were always doing: trying to do it all over again, but this time with a layer peeled back, to keep the grown-ups interested.
Consider each variation on the theme of Gary and Dave's game you see in the indie RPG sphere as that: as trying to do it again with a layer stripped away, with something previously immanent now made explicit, with some part of the subtext made text.
These games are compelling: you shouldn't be playing them, it's hard to get people together to play, every classic game is dripping with countermodern impulses, WOTC has an unbreakable monopoly on the game stores, the game community itself is shit, the games take far too much time and yet and yet...
People are compelled, all in different ways.
Next time you see someone propose yet another hip new spin on the what-RPGs-could-be wheel, ask yourself what part were they trying to pull back and look beneath?
-
-
-