Seven years ago, when I first started to click and google my way into the online RPG community, here’s what I (like most people) saw:

1. Hundreds of people who were trying—often quaintly, sometimes dazzlingly, always earnestly and by-and-large without the huge professional benefit that a successful gamble on student loans had given me in the way of an expensive art education—to make some creative things.

2. Hundreds of people on messageboards and blog comments trying--by any means necessary and with no holds-barred or fact-checking--to make doing that as painful as possible

3. The more daring and interesting a thing was, the more aggressively thing #2 happened

…and have no doubt: it worked. A great deal of middle-of-the-road stuff was being published while the best stuff languished on blogs or in obscure corners of still-obscurer forums.

When I started this blog, folks would write in, asking questions about which way to take their projects, always including “I want to_____ but I’m afraid people will say _____ “.

This isn't just about hurt feelings, either, in an online scene where the only way to make a profit is to get your project talked about: making a sustainable living requires attracting hate speech. To a far larger degree than in non-nerd media.

Here were people not recognized as artists in any sense, not influential to anyone, with mortgages or student loans or both, working tech jobs or at banks or biscuit factories, trying in the few hours between commute and sleep to do new things but sure of only one thing: they would get attacked for it. And whatever -ism the attack involved would be forever attached to their name on the internet as the price of trying to be creative.

Trolls are not a government. This wasn’t censorship or directly free speech issue—and people should not use those terms. What post-fact criticism in volume does isn’t censor, what it does is raise the cost of being creative.

The problem is not so simple as criticism or censorship being good or bad--the issue in small online creative communities is about when the cost of being creative is higher than the cost of lying (or, to be very charitable, talking without googling a single word of what you're on about first.)

A lot of the attacks on people like James Edward Raggi at LOTFP, at Stacy Dellorfano at Contessa, and like me presume that the internet controversies we were involved in are somehow failures of professionalism or decorum—mistakes, brand-damaging eruptions of resentment, lashing-out, rants, screeds penned against better judgment.

In fact, they’re nothing of the sort. I am proud of every stand I ever took and I suspect so are they.

When a white person attacked an artist of color for daring to make pin-up art, fighting back made the RPG community better.

When designers attacked Contessa for only having games run by women and erased the involvement of trans women in Contessa, fighting back made the RPG community better.

When a bunch of dudes without facts told Shanna Germain her space succubus was sexist, fighting back made the RPG community better.

When the same dudes told a trans woman a trans character in a game she co-wrote was transphobic, fighting back made the RPG community better.

When groups of designers started a years-long thread behind a paywall dedicated to harassing other designers, fighting back made the RPG community better.

When the girls and I quit working with a company because they hired a transphobic commentator and people attacked us for it, fighting back made the RPG community better.

When a designer lied about rape to frame another designer, fighting back made the RPG community better.

When a designer accused a movie he’d never seen of vast moral crimes despite never having seen it, fighting back and pointing that out made the RPG community better.

When a designer claimed a rival he didn't like was secretly courting Nazis, fighting back made the RPG community better.

When an asexual, married, cis-presenting mom with a kid falsely claimed she suffered more homophobia than the LGBT game designers criticizing her, fighting back made the RPG community better.

When a dad claimed that Kingdom Death was somehow hurting his daughter while ignoring the feminists who were calling him out, fighting back made the RPG community better.

Everyone who took a moral stand in any of these incidents has lowered the cost of being creative by proving to creators that the honest elements of the game community have their back and by proving we want to raise the cost of lying.

But the cost of being creative is not yet zero: my co-author Sarah Horrocks has responded to recent attacks by cishet dudes on RPGnet by saying she’ll never work in games again. That avenue for exposure and side income has been denied this particular up-and-coming trans creator. Not a single one of the folks who attacked her work has been forced to make a similar announcement.

As long as the people who can do that pay less of a price than the people who stick their necks out by trying to change what we are allowed to see and read and play, there will alway be a need for ”drama”—no matter how unpleasant that word is.

Those of us privileged enough to be able to tank in these fights can and should. The maker of things is sometimes innocent, the liar never is.
-
-

Alright, third try at doing an homage to this Adrian Smith piece from Realms of Chaos for my book Black Metal Amazons of the Devoured Land.

So, to review. Here's Adrian's original, pencil on paper: 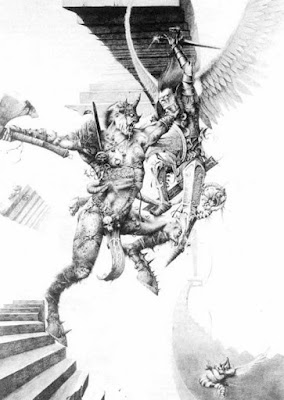 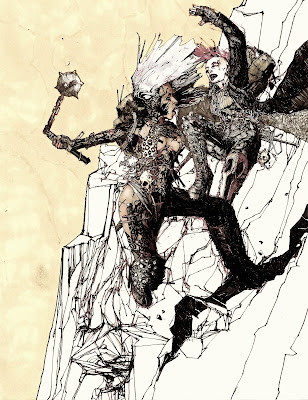 Adrian clearly rips my jaw off and feeds it to me

Round two, black ink only:
Nice bits but still a clear victory for the alphabetically hegemonic Smith. 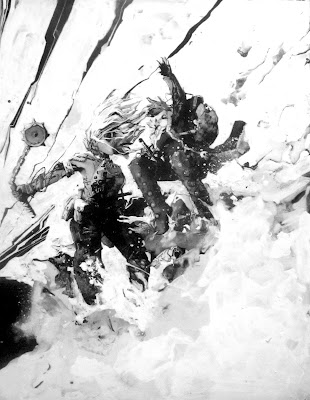 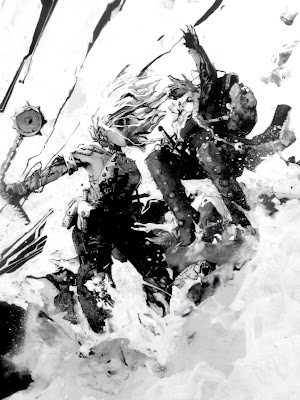 And now the last round, acrylic paint on paper, win or lose I'm not doing it again after this:

Slowwwly but surely working on pictures for Black Metal Amazons of the Devoured Land coming sometime (never ask, if we knew we'd tell you) from Lamentations of the Flame Princess.

These are finished paintings yet or very good photos, but they get the idea across. Acrylic paint on paper. Click to enlarge...

We Eat Blood And All Our Friends Are Dead. Now available. 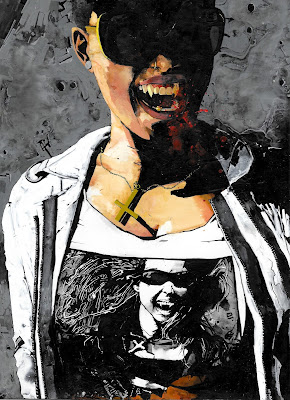 So my friend Sarah Horrocks (writing and art) and I (also writing and art) did a video game for White Wolf--the Vampire: The Masquerade people. It's called We Eat Blood And All Our Friends Are Dead, part of the World of Darkness: Preludes pack.

Basically it's a choose-your-own-adventure in text-messages. 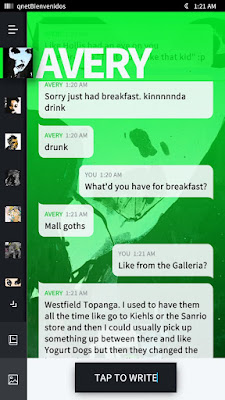 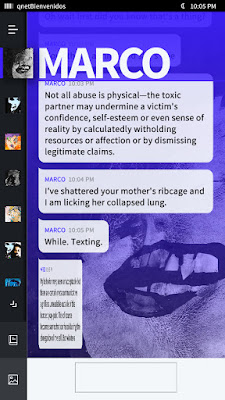 We Are Having The Desired Effect

This came through for Patrick and me via the Satyr Press mailbag...

I'm of that generation where I could be lifted right out of Stranger Things.  I picked up the red and blue books a few years after they were released, and then specifically remember my joy buying the Greyhawk full color map and actually taping it to our dining room wall.  I'm still surprised my father let the map stay up there all through junior high!

I've gamed ever since then, with only a couple of "dark" years where there was no gaming and did a couple of tours of duty in my 20s in the industry itself (was an editor and writer for Atlas Games and then did a few supplements for the amazingly esoteric Skyrealms of Jorune).  Then I went on to be a business professor and ultimately a consultant.

I'm happily now running a D&D 5e session with a group of mostly newbies ... including one Broadway actor, one improv comedian, a software exec, etc.  Fascinating group.  Probably the best group in terms of diversity I've ever gamed with.

The reason why I want to thank you is that through products like Maze of the Blue Medusa and Deep Carbon Observatory, I've rediscovered what it really means to run a game.  I got lazy over the years.  Grab the fancy, full-color Pathfinder modules, spend a ton of time prepping battles that would take hours, worry about online maps, etc.  I also played narrative game systems ... FATE, Fudge ... but even there I sometimes found myself searching for the easy way out -- fully developed scenarios I could just pop open and run.

The best game-mastering I ever did in my life was running the diceless game Amber back in the 90s.  I had the pleasure of meeting Erick Wujcik and doing a couple of games with him at GenCon, crammed into somebody's hotel room.  It REQUIRED me to make shit up, to listen to the players, to try to always keep things going and stay one step ahead.

Prepping for some of my recent 5e sessions, culling from your material in various bits here and there but always making it my own, I've got my mojo back.  I'm inventing magic items and crazy curses on the fly, pushing the limit on mixing of genres ... comedy, then horror, then action, rinse/repeat.

So, for helping me get my DM mojo back, MAJOR appreciation.  Good luck with everything.  Wish I had more time to write again, as I'm that inspired. 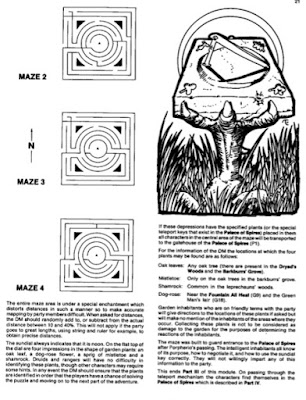 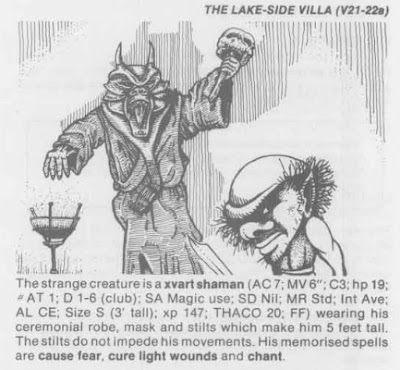 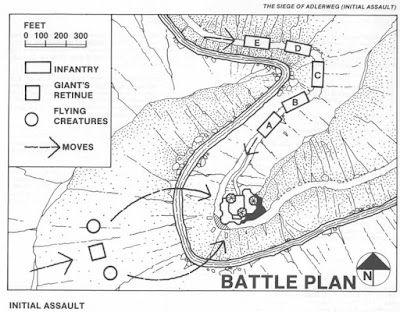 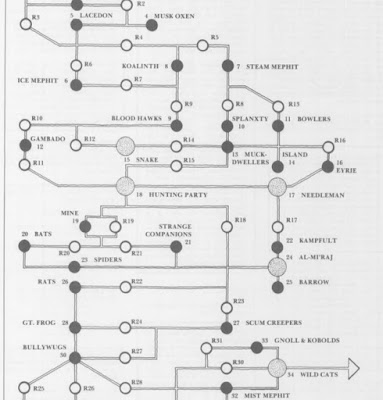 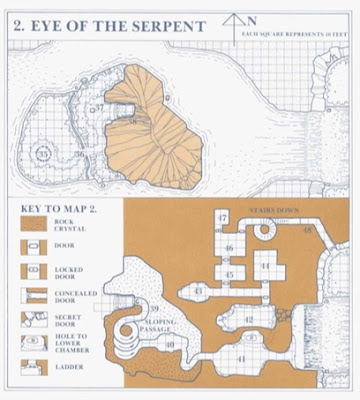 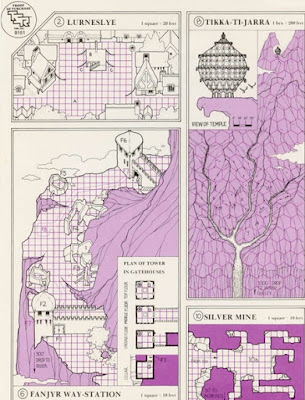 This is quite fucking useful:

Matt Strom over at the Ice And Ruin blog has created (all by his lonesome without telling me) an index of all the world-material entries for my D&D game that are on this blog--everything from the Maidenmother Crone to the Jade Fang of Tiamat and all that.

With over 1000 entries on this blog, it can be hard to sort through this stuff.