I'll be finishing up the series about the goons soon.

As for what's next on here, it's up to you, I'm giving you three options--

Whichever gets the most votes wins. If D wins then I will pick from the responses.
-
-
-

If you want more in this series don't forget to vote by leaving a comment up there in Part One.

Freyja Erlings (aka Freyja Katra aka Freyja Catra aka Freyja Erlingsdottir aka other names back in the day) is the most aggressive harasser and conspiracy theorist in the online tabletop world period. She spreads antisemitic propaganda, she's racist as fuck, and--unusually for a goon--she's so shitty that major industry figures have actually shouted her out specifically. They remember her name.

There’s probably no better example of the double-standard at play in goon thinking that Freyja gets to be part of their club despite all the harm she's done to the community. 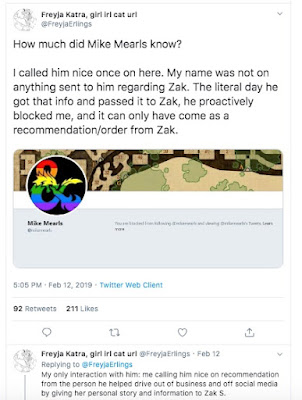 Freyja needs me, a blogger, being in a position to "order" the creative head of D&D around to explain why someone would block her on Twitter?

Given all she's done, why would anyone, anywhere in any position, with any politics, with anything resembling a functioning value system, much less the head of the game she's constantly trashing not block Freyja on Twitter?

I don’t know, but there are a lot of people (unless they’re Nora Reed’s bots) who not only don’t block her but actually like and retweet her. 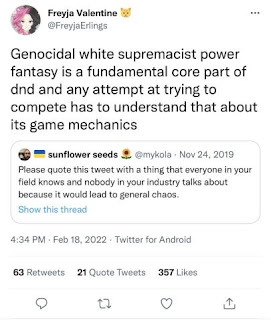 All those bullet-pointed things happened long before Freyja transitioned or expressed any desire to do so publicly (so you can't say Monte, Ryan, Bleeding Cool, etc are just being transphobic) and they also happened before Freyja went full-tilt and explicitly racist:

In addition to apparently being the patient-zero antisemite who invented the conspiracy theory that I have a trust fund*, Freyja has been complaining about flaws in D&D up-to-and-including crimes the game has supposedly committed against humanity itself for over a decade. Unlike the majority of the civilized world, she can’t bring herself to just not play it.

It's one thing to come across a niche cultural product that you feel, rightly or wrongly, powerfully conflicts with your values, talk about it and move on. It's quite another to do that and then hang around in the niche for ten years afterward.

Freyja, an Icelandic woman as white as you'd expect, is basically the center of another hobby within the niche hobby dedicated to inventing conspiracy theories that D&D is bad for people of color, despite:

...many D&D players of color giving thoughtful interviews and writing eloquent essays about how D&D might interact with race which contradict every word of what Freyja says,

...Freyja having been online during the same time the original creators of D&D posted on forums in the zeroes, and therefore in a position to have engaged the creators in a conversation about this,

...Freyja sharing the online space with massive numbers of D&D players of color who she therefore could have engaged in a serious conversation about this,

...Freyja never having had a real-life conversation with any player of color about D&D,

...and Freyja never having even played a real-life game with anyone who wasn’t white, so far as I am aware.

There’s a name for white people who propose elaborate ideas about what is and isn’t good for other people without meaningfully asking said people what they might have to say about it: racists.

This didn't stop Freyja. The case proves she's wrong, the case proves there are real consequences to being wrong, and yet she just can't stop herself.

Many years ago Freyja was spewing some racist shit and I pointed out it was racist and, lord knows why, Freyja agreed to have a private conversation with me about the messages she was putting out in the game-o-sphere.

So we're going back and forth for a while (brusquely, but talking) and I asked an obvious and very basic question that literally any white person who might think of themselves as a social justice advocate should have considered long before ever opening their mouths:

But the way Freyja dodged it was super weird: she wrote in ALL CAPS that I needed to google intersectionality theory and not bother her with such questions. I pointed out googling doesn't give me her answer to the question I asked. She said the same thing again and then she asked what my other questions were.

If this were on Twitter, that performance might not seem so bizarre, but remember: this was a private conversation that she agreed to have. There was nobody watching, there was no gallery of goons to impress with the force of her rage.

Why would someone voluntarily get into a conversation just to say something that the only person who can hear them could not possibly receive as persuasive?

It was like that scene in Kundun where Mao takes the Dalai Lama aside to quickly explain that Buddhism isn't a real thing. And seems sincerely to think: that'll just about do it.

Even as an atheist, you just walk away going "Chairman are you ok?"

When the psychologist helping with this project looked over this (and everything else we've collected about Freyja so far) they said...

Nowadays, when patients, members of the general public, or even some students call someone else a "narcissist" it's just a fancier way of saying "crazy"--it's a catch-all for claiming that the other person did something they disapprove of. In cases like this I might ask a student: is there any kind of negative thing this "narcissist" would not do? Are there behaviors the label can't explain? When a non-mental-health professional uses the word that answer is usually "No" so it's a fairly unhelpful and dismissive way to use the label. Everyone has some kind of motive, even a narcissist, and empathy requires being able to describe motives and be curious about motives even it you can't agree with them.

In Freyja's case, though, there are signs that might indicate genuine Narcissistic Personality Disorder, even if we ignore the several DSM criteria for NPD that could be implied by statements Freyja might make just to try to sell her work online.

Specifically, narcissists often behave as if they've authentically forgot the person they're talking to has their own needs, point-of-view, or motives that differ from their own. They can be impatient with explaining themselves because they're not fully convinced of the others' need for explanation is based in anything real. In contrast to someone with anxiety, your insistence on interacting rather than just listening to her talking wouldn't necessarily even make her upset, it might not even occur to her that it meant anything. Narcissists are typically not curious about why anyone might differ from them. An important thing to remember is the narcissist is not only imposing their will on others, they often don't seem to remember that others they interact with even have a will.

Some kinds of mental health problems make it hard for a patient to recognize rules or norms, but a key trait of a narcissist is acknowledging--and possibly even approving of--rules but somehow not realizing the rules apply to them. Criterion 5 in the DSM is "an unreasonable expectation of favorable treatment".

NPD would account for many of Freyja's specific quirks including the expectation (if it's sincere) that Mike Mearls would treat her differently than other trolls after all her public bad behavior, Freyja engaging in activist behavior while failing to seek guidance from the communities she's trying to represent, her apparently sincere assumption of automatic compliance, Freyja's continuing to engage in a behavior long after a close business partner was successfully sued for identical behavior, her inability to take questions as read, as well as her other reactions in that private conversation.

*Though I am not sure if she's responsible for the additional antisemitic lie that my dad's a lawyer--which detail is extra weird because both of these tend to be spread by people who also claim my legal briefs were not prepared by, like, lawyers. But then internet conspiracy theorists are not exactly known for logical consistency and the game community isn't exactly known for asking for it.

Email ThisBlogThis!Share to TwitterShare to FacebookShare to Pinterest
Labels: Goons, People Who Harassed Us Shockingly Revealed To Be Not What They Seem Yet Again
Newer Posts Older Posts Home
Subscribe to: Posts (Atom)