-I went to all the trouble of converting the Midkemia "Where's your PC been during that session s/he missed?" table to an easier-to-use format and used it but it seems kinda dull, really. I've switched to using the "Lost In Faerie" table from The Great Pendragon Campaign.

It consists of a What you were doing in Fairyland section, with stuff like:

1-3 ...captured by giants and forced to cook their hideous provender.

and a Why you're back section with stuff like:

13-14 He hid from their mocking laughter

(Rules in many Pendragon books assume the PCs are male knights. Even stranger, they assume you are using their rules to play Pendragon. What Greg Stafford doesn't know won't hurt him though, I figure.)

It's also better at explaining how the PC disappeared after killing a squid four weeks ago and just now turned up in a 12' x 14' room: she took a wrong turn and goat-horned sprites crawled out of the walls and took her away--then she ran off and said There's No Place Like Whatever Hellhole My Friends're In and Taaa-Daa we're back. 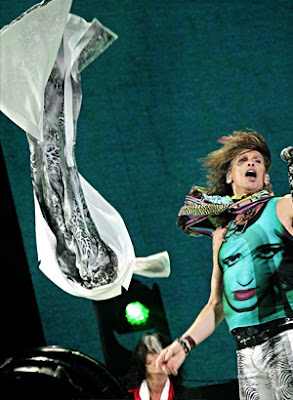 "The elves thought you ugly or uncouth."

"Which is weird because you're half-elf."

-Yeah I lost my dog and wrote a blog post about it and swore revenge. Kimberly's dog is just called "Sueno #5". Or, was. Until that mechastirge trap. Can't remember if they healed it or whether we're on Sueno #6 now.

-So they're going through this temple dungeon and they find the scriptorium--they spend a half hour looking at the books. So I rolled on the 100 random books table. Got "architecture-history" and "demonology". Which, the way I see it, if you're looking through a temple trying to find a demon is about as good as you can roll. Of course this book explains how temples like this are usually laid out. Of course this book has a ritual you can use in it...

-Not that it did anyone any good. They barricaded themselves in the book room and waited for the monster to come to them and the wizard died of a self-inflicted stab wound trying to hustle up some blood to compelte the ritual to control the atrocious Orth...

-The nice thing about tentacle monsters with five attacks is you get to use your random hit location dice. "It has you by the right arm and...right leg". It would've killed Connie (desperately smoking the charm cigarettes she got last week to no good end) had Mandy not run over and caused serious wounds.

-Likewise causing serious wounds was Darren's dwarf.
Look at his jetset shit:
-everyone spends an hour looking through the dungeon without him
-the monster attacks and Connie gets 20'ed by it and it's chewing on CP's head
-Darren suddenly pops up in videochat from the airport bar in Portland or something (escaped from Fairyland, I guess), fights the monster, delivers the killing blow
-then he gets on his plane, leaving everyone else to sort out getting the monster back to town and sailing home

I've been trying to contact anyone from I Hit with My Axe without success.... over on Frothers Unite (a UK gaming forum) we're running a charity fundraiser and I was hoping you could help by giving it pimp!

Full details of it can be found via my blog or you can contact me at dagenhameast At yahoo DOT co DOT UK.

Dammit, now I've got to get my hands on that Pendragon table. "Captured by fairies" is the best all-purpose excuse for missing PC's I've ever heard.

Does the atrocious Orth still resemble the flumph at all in its mechanics? Like does it still squirt liquid shit at the players out of its horrible mouth-anus? The flumph was always more disturbing than goofy to me.

To this day I have used the Pendragon rules for just about everything but actually playing it.

Pendragon is easily the best rpg no one plays.

one too many bloody marys on the plane, bug D?