One of your maskier cities... 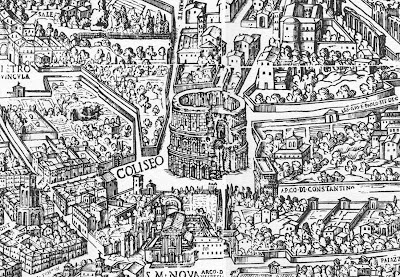 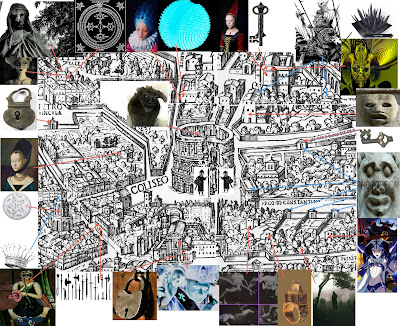 People sometimes ask about these maps. I usually use them as "back up" maps for locations I haven't fully fleshed out yet. Like: need a city? Here's one.

It is way easier to make and less useful than a normal map, but good if you have a headache and 15 minutes to kill. And you can build on what you have later.

But since people ask, here's a short tutorial:

1.Google image search a "large" picture. Like I generally google "map medieval" or "floorplan" or something and just look around til I find something big enough to fill on the screen.

2.Find it, download it. I open it in a program that's on all recent Macs called "preview". Look at the file size.

3. Make a new, all-white file that's a few inches bigger than that one in every direction.

4. Cut the original picture and paste it in.

5. Now just google words that fit the mood of your campaign. The above map came from things like "medieval mouth""creepy head" "stone face" "masked weirdo". In fact: everybody's tripping over themselves to figure out how to create a "weird fantasy atmosphere"--just google "weird monster".

7. "Cut" them from their own files, "Paste" them into the new file, (in preview, it lets you adjust the size of the image as you do this--most other programs do too)

8.Preview has a button labelled "annotate". Hit it. Some new options will appear at the bottom of the screen, including: arrows, text boxes, color, line thickness, and font size. Pick an arrow color and draw some arrows (if they're the wrong size, adjust the line thickness option a few clicks down) Put in text if you want. The text function on Preview is idiotic but a little experimenting will allow you to figure it out.

9. Save it as a JPEG. Be careful: preview keeps each individual element (arrows, text) movable and selectable until it's saved. If you don't save it right, a lot the work you did on top may disappear.

Man, I love these! They give me everything I want, without getting in my way, at all! :)

In case I haven't said so lately, Thanks!

i should really try making maps like this, seems way more fun

do you find they take any longer than more 'traditional' maps?

these are rrrrrrrrrrrrrrrrrrreally easy to make and I have to think way less then when I make a normal dungeon.

These are just sort of lazy backup maps for if the PCs go off to some unexpected place.

oh, haha, okay then, i've got the software so i'll be sure to try it for my next map

I put a tutorial up there for anybody else who's wondering

Thanks Zak, I'll let you know my results whenever I get some spare game time

Yet enother simple, witty and totally usable tip. Zak, you are the king of these (hands down the crown of awesomeness).

The idea of a visual material pertaining to the PC map might even work better for the GM as you have a collection of images for your subconscious to ruminate on while your attention is number crunching to see what the 8 HD Troll needs to hit the Half Elven Monk or how many shrunken heads the Swamp Hag keeps in her hut, ect.

1st time poster & long time lurker! Nice way of doing this. This might take me some practice but its well worth it.

So...liiiiike...a map with pictures for the GM's visual reference?