It Came From White Dwarf! 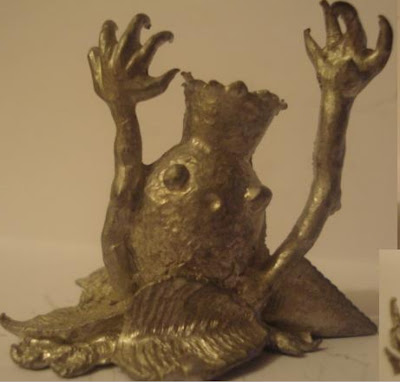 Random notes from lying in bed reading the World's Once Greatest Hobby Magazine...

-First, here's a half-finished dungeon using only pictures from White Dwarf 1-9 or pictures of (disturbing) minis that I tracked down from them being advertised in 1-9... 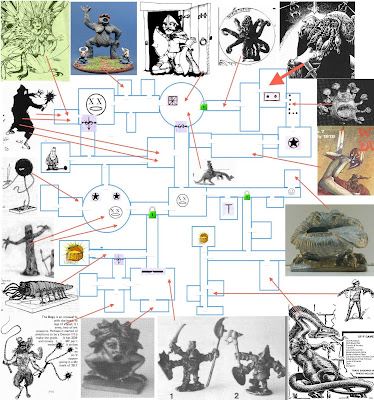 -Magazines. Your blog--wait, statistically speaking, if you're reading this you don't have a blog. anyway, blogs--are magazines. Like this here you're reading is the opening editorial. Then over on the right there we have my departments. The only difference is: lots of things you can probably figure out without my help. Point is you can see all the brains that will be making the next generation of RPGs here in the magazine's bylines. Steve Jackson, Ian Livingstone, John Blanche...

-Quote I just got in the mail from A Certain Game Development Professional Who Reads D&DWPS:

Just read your follow-up to the pay thing. You are 100% right.
You could argue that the entire business history of D&D has been an ongoing, losing fight between a company trying to treat D&D like a publishing business and a fan base that wants to treat it like a hobby.
-Discuss?

-Speaking of White Dwarfs, has anyone seen the new Ricky Gervais show with Warwick Davis? Is it any good? 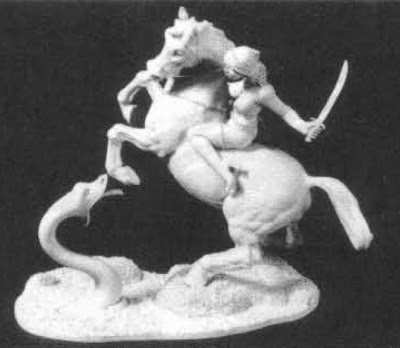 -Judging from the reviews and ads, the number of kinda wargame/kinda boardgames (like Divine Right) from this era is staggering. I wonder if the current resurgence of this kind of game (Small World, Carcassone, etc.) coincides with the re-interest in old school D&D? I mean, I wonder enough to post on the internet about it, not enough to actually, y'know, do the research.

You could also profitably pull a spell like Kiss of Disfigurement off the houri list on a scroll to add optional hilariousness to an intrigue-heavy setting.

-Holy fuck! How much of the '70s does this explain: 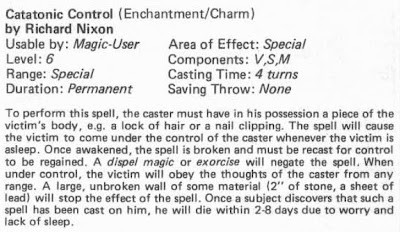 Email ThisBlogThis!Share to TwitterShare to FacebookShare to Pinterest
Labels: about books, books, DnD

Life's Too Short isn't great, no. Liam Neeson does a brilliant -- but tasteless -- bit in the first episode, but that's been the highpoint. I suspect it may depend on how much you like Gervais; I'm not a huge fan, so it doesn't do much for me and feels like a half-hearted homage to Curb Your Enthusiasm.

I enjoy spells like Catatonic Control, but always omit stuff that in my opinion is pretty goofy like the forced death in 2d4 days once you discover its presence!

Oh yeah, that genre of fantasy boardgames brings back memories, but I would say that today's fantasy games like Small World are considerably lighter-weight. In the 70's and early 80's you had Divine Right, War of the Ring, Red Bear White Moon, Swords and Sorcery, Valley of the Four Winds, Barbarian Kings ... Let's call this genre the epic fantasy hex wargame. All with hundreds of cardboard counters, hexagon grid maps, and a split between grindy battles and heroes going on quests for diplomacy, artifacts, duels ... The recent War of the Ring boardgame and some of the Fantasy Flight offerings are the closest you get these days.

The Liam Neeson bit was jaw droppingly funny - but, as Kelvin says, I can't see how it can reach that level again. The woman playing Warwick's assistant is uncanny, though.

From the Houri article:

If attacked he will try to beat off any opponents including his own comrades...

The Liam Neeson bit felt like a sudden intrusion of a really spectacular scene of Extras into -- I dunno -- a walking version of the Office. Or at least the portions of the Office where there's low key build up.

I hope it gets better.

D&D is a toolkit; that's the appeal on one side and the problem on the other.
You buy a set of tools presumably to fit your needs. And maybe some manuals if you're smart enough to think you might need them.
And that's it.
You might lose or wear down a tool and need a replacement, okay, but you're not going to buy the same tool over and over again on a regular basis just 'cause.
Some companies have figured this out. They release a few core books of a line and that's it, maybe the odd reprint.

"You could argue that the entire business history of D&D has been an ongoing, losing fight between a company trying to treat D&D like a publishing business and a fan base that wants to treat it like a hobby."

Alright, I wanna tell this story. It's about those epic fantasy hex wargames, so it's a bit on-topic.

I grew up in a small, midwestern town, listening to my uncles' Yes albums but singing in a traveling Christian family band. (Yeah. F'real.) Full of 'why is my brain crammed with this mess' ennui. It sucked.

One of the few non-sucky bits was Lord of the Rings, which I got at 10 as a gift from a family friend. Guy who gave it to me was different - the locals thought of him as a hippie, and maybe he was. But he was also shrewd and odd and funny, full of answers with a lot of spin and truths other adults wouldn't cop to.

I didn't know the dude at all, and yet he saw me floundering, I guess, and gave me something he thought might help - The Lord of the Rings, just out of the blue. The world went all technicolor for me with those books. I read them and read them, the usual story.

That's not all, though. A then a couple later, he contacted me (now 14) - would I like a Middle-Earth game? I rode my bike over immediately.

It was the full War of the Ring game - he'd bought it in a moment of enthusiasm, then read the rules and realized there was no shot in hell of getting anyone to play this with him.

But he didn't read the rules right away, and here's where it gets to transcendent levels of sweetness: He'd taken the six or eight paper hex-maps you were supposed to tape together on your table, and he'd mounted it to 3/4-inch corkboard using rolls of translucent film. The thing was about five feet square, weighed about 20 pounds. Clearly loot of limitless value.

I played War of the Ring like a sickness for about three years - solo - using some foe-randomization tables I vividly remember in form but not function. I'm guessing the foes were designed to get beaten brainless by my 14-year-old powergamer self. And deep! That game was old-school in its viciousness; I particularly remember drawing a palantir at the wrong time and just setting the game back up.

I know most of this shit wasn't on-topic, but whaddayagonnado. Point is, those old half-strategy/half-wargame hex games are awesome, and deserve a renaissance of their own.

Ha, I possess a copy of that treant mini from your "White Dwarf" dungeon...

(to the left down toward bottom row of minis)

Hell, I still got my free single from Bolt Thrower that was given away in WD back in the day. Nothing like gaming to some free thrash metal as you hack up some Wood Elves! Those were the days when the geeks ran the hobby with nothing but the love for it, a great imagination and their Mom's credit card.

I've still got that Treant too! I also remember trying to make the Carrion Crawler figure. It was a lot harder than he said it would be...