There are those born with a passion to dazzle and entertain, with a song deep in their heart, with a need and capacity to delight those around as a toddler cannot help but delight its maiden aunts and mother. In places of danger and wild uncertainty they die by dozens, leaving to sullen and neglected offspring naught but diverse lutes and a heap of unclean motley. The demiurges and agonarchs that fashion from our world red contests do not concern themselves with such creatures, nor do we here this day.

Others ply the jongleur’s path more steadily but less wilingly, and are driven by a stranger engine: The gods of death demand a record.

In all places and all times, in all nations and tongues, there are those cursed to know and account to Memory and Mortality what has been brought to their country, as the wine merchant demands the vintage and chronicle of each cask in her cellar. They arise from all families and strata, and are given no choice.

The curse brings with it no concommitant appreciation for song, rhyme, or good company, though a native or willed intimacy with these tools does ease the burden on those stricken. Laden willingly or otherwise with mnemonics and harmonics, the troubadours wander, measuring and auditing the deeds of those they meet against the day these souls pass from the hands of their Author to those of their Archivist.

Bearers of the Knowing Curse would rather not be, but make the best of it: they fashion songs of their accounts and entertainments of their songs, and seek thereby to both derive a nightly crust and placate the Demon of All Stories who struts and shrieks across the meager sleep that is their affliction’s patrimony. They rise again with the sun to seek new and distant accommodation, lest a vulgar audience tire of the truths which are such minstrel’s only coin. They are much in demand at funerals.

Though the difficulties of this path are by no means to be envied, walking it imparts a personage a wide experience and useful talents:

At first level, the Troubadour gains two skill points to add to any of the values below. The available skills and their starting values are below, new skills are denoted with a *: 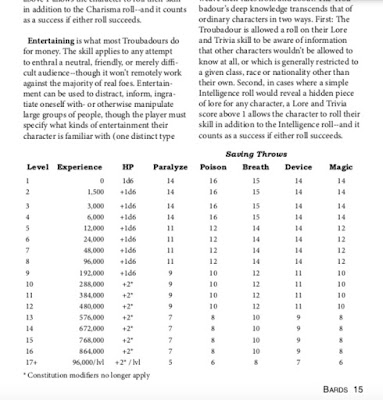 Animal Handling applies to any attempt to get a mundane animal to do what you want, from quieting a guard dog, to racing a horse to teaching a chicken a stupid dance. This doesn’t work on hostile animals (ie encounters) unless you have food, fire, or some other form of leverage which would reasonably change the animals’ mind about you. In cases where a simple Wisdom or Charisma roll would do the trick for any character, an Animal Handling score above 1 allows the character to roll their skill in addition to the Charisma roll—and it counts as a success if either roll succeeds.

Entertaining is what most Troubadours do for money. The skill applies to any attempt to enthrall a neutral, friendly, or merely difficult audience--though it won’t remotely work against the majority of real foes. Entertainment can be used to distract, inform, ingratiate oneself with- or otherwise manipulate large groups of people, though the player must specify what kinds of entertainment they are familiar with (one distinct per point of skill) if the form would require sleight of hand (card tricks or juggling for instance) you’ll have to get at least one point there too and the roll to entertain is made on the higher of the two scores. In cases where a simple Wisdom or Charisma roll would do the trick for any character, an Entertaining score above 1 allows the character to roll their skill in addition to the Charisma roll—and it counts as a success if either roll succeeds.

Lore and Trivia are what Troubadours weave their tales from and about. The Troubadour’s deep knowledge transcends that of ordinary characters in two ways. First: the Troubadour is allowed a roll on their Lore and Trivia skill to be aware of information that other characters wouldn’t be allowed to know at all, or which is generally restricted to a given class, race or nationality other than their own. Second, in cases where a simple Intelligence roll would reveal a hidden piece of lore for any character, a Lore and Trivia score above 1 allows the character to roll their skill in addition to the Intelligence roll—and it counts as a success if either roll succeeds.

Due to the peripatetic and disjointed nature of the Troubadour’s lifestyle, the advancement of such individual inevitably involves collecting unexpected talents. At second and each subsequent level, roll d100 each time the Troubadour’s level goes up.

58-59 You’ve had to fix one too many sodden cart wheels and abused dulcimers. Gain a point of Tinkering (as the Specialist skill) each time you roll this.

61 You have learned much on the road. +1 Wis to racial max, excess goes to Int or Cha.

62 Well, technically it is a dog and pony show. You’re not just good at handling animals, you’re good at training them. Given a week, you can train any basically neurotypical nonhostile and domesticated animal to do such tricks as that animal might be able to do, (though it won’t be able to fight independently for you if it couldn’t already). Where is the line of “domesticated”? Cats: yes. Monkeys: yes. Tigers: no. (Though, note, apparently cheetahs are highly trainable if you can find one.) If you roll this result again, re-roll.

63 Heavens, my thumb’s come clean off! You are unusually skilled at entertaining children and have a few tricks ready to amuse them at a moment’s notice. When trying to get them to do something, roll twice and pick the better result. If you roll this result again o nthe d100, roll three times and pick the highest, if you roll it again then 4, etc. Doesn’t work on like evil demon children that want to eat your brains or whatever.

64 With your odd cap and mandolin, you’ve mastered the art of looking harmless. You are skilled at playing possum--if you pretend to go down in a fight you will most likely be ignored thereafter even if everyone else is already dead and will get a +2 to any attack in the next round (on top of any possible sneak attack damage). You may definitely use Stealth (if you have it) even out in the open during a fight since you’ll just look like you’re trying to get away—at least until an enemy sees you hit someone.

65-68  He's a card player, gambler, scoundrel--you'd like him. You have friends all over. You have one contact for each Troubadour level you have (write these pals down when they appear). This ability can be triggered in any civilized area (or uncivilized areas that travelers frequent) and HEY, IT'S YOU!!!. (Referee, get rolling some random NPCs.) These will generally be low-level underclass types--thugs, mountebanks and freakshow performers and, though they have information, they will not be adventurer-material (i.e. they won't help you fight things or open trapped doors for the most part). However, if you re-roll this result you may do one of the following things: "upgrade" an existing contact to upper class status (inheritance? big score?) or "upgrade" an existing contact to adventurer status (that is: you've made it look like fun and they want some, too.)

69-75 You’ve been forced one too many times to resort to fisticuffs to recoup your earnings from unscrupulous innkeepers: +1 to hit. Re-rolling this later adds +1 more.

76 So you found this scroll in a case by the side of the road… You have learned one magic-user spell. It functions as if cast by a 15th level wizard or your level whichever is higher. Determine the spell randomly (d8 for level). It works once, that's it.

77-80 You’ve learned to avail yourself of such shadows as are convenient. You have a sneak attack of 2. If you re-roll this, add another point, though you max out at 4.

81 You have mastered the art of combat misdirection. You may add your Charisma bonus to hit with any suddenly improvised weapon the first time you strike against any intelligent foe (who the knew you were going for the kettle?). If you have no Charisma bonus, this bonus is simply +1. Re-rolling this adds to the damage: +1, then +2, then +3, etc.

82-85 Score! You have d6 doses of horrible drugs that are bad for you. They work by ingestion or insinuation. Unless the GM has some crazy drug table, I'm going to say victims must save or act as if under a Confusion spell for 4 rounds.

86 You have such an honest face. Someone NPC of ordinary intelligence you can talk to will  automatically believe one lie you tell per day. If you re-roll this result it goes up one lie per day.

87 An impressed colleague is waiting at the foot of the stage with a gift for you. You are given a musical instrument of unusual quality. It’s doesn’t help you perform any better but it is worth 4d100sp (no xp for that, though) and gives you a +2 to any conversation with fellow entertainers who will immeidiately ask about what weight strings it uses and whether the humidity affects the resonance and…

88 Ohhh... your head hurts and why is this countertop marble? It's hard to reconstruct but you are pretty sure you won 3000 sp and spent it all in one night. Here's how it works: you have exactly ten seconds real time to say what you bought. You now have all that stuff, assuming it adds up to less than 3000gp. You do not get xp for this treasure.

91-94 There are fringe benefits to all that make-up you wear. You have learned the art of disguise. Somewhat. It's a your Cha vs. their Wis roll, assuming you have access to about 40 gp worth of stuff or the kind of materials you'd find in a civilized area. Obviously there are limits to what you can disguise yourself as but if you and your Referee can’t agree on them you probably shouldn’t be playing together. Every time you re-roll this result you get +2 more to the check.

95 There are certain admirers you have who insist you sign the guest book under an assumed name. You are adept at forgery. Mechanical details work like disguise above: (Int v Wis, 40gp, +2 on a re-roll, etc etc) though you can also make a Sleight of Hand roll and if either is a success: you’re good.

96-98 Your confidence has grown even faster than whatever abilities you supposedly have confidence in. +1 Cha up to racial max., excess goes to Int or Wis.