One Way To Do It 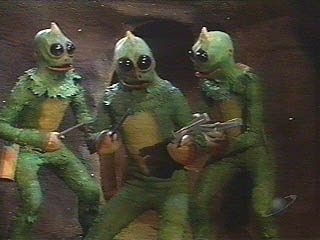 Thanks to Constantcon I have had 7 DMs in 7 days. It gets you thinking about different ways of doing the thing.

I'm gonna use how Jeff Rients ran his game as a kind of case study because...

A) Jeff has his well-known gameblog that is widely-read in the same circles that this one is, so it's interesting to compare how he runs a game to how he talks about gaming

B) Jeff's very good (actually, pretty much all the GMs I've run with were good, but Jeff definitely has a very distinctive GMing style and his specific experience running convention-type games showed through in his G+ game both in construction of the adventure and in the way he ran it)

So, some notes on how Jeff rolls:

You roll a 19 to hit, Jeff goes "Excellent!" and smiles. You roll a 1 and give the monster an extra attack, Jeff goes "Oh, perfect" and smiles. You think of a clever plan, Jeff goes "Wonderful!", you think of a ridiculous plan that will kill you, Jeff goes "Fantastic!" Obviously part of this is just he keeps the energy level up. Another part is subtler: he isn't a negligent, indifferent god, but he sends a similar message: if you live, he will be happy and will have had fun. If you die, he will be happy and will have had fun. So rely not on his mercy.

An advantage of this attitude is it allows you to do...

When Jeff says it, it means "It would amuse me to see you drown while looking for an exit at the bottom of the pool with no light source." Or at least his very friendly smile seems to suggest it does.

Many GMs are against nudging altogether. Jeff isn't, he just gives the impression that his nudges are nudging you toward doom. Which has the same effect in the end as no nudging at all.

-The dungeon is fuck-all on paper

I have often noticed this when reading Jeff's blog--he seems full of good ideas but the complete dungeons he posts are just pretty much rooms with monsters you fight in them (and fight in a normal way: they hit you to do damage and vice versa). The clever tricks, traps and inventions he's clearly capable of coming up with are not the centerpiece of the dungeon.

In the game we played all we really did mostly was go from room to room, try to find the right path, and occasionally fight things that did damage or, occasionally, had poison broken up by a few rooms which had natural features that functioned as simple traps. Also, the pitch for his dungeon was, on paper, super-dull: you are all the same race and class (basic halflings) with average stats (1st level and 3d6 in order--my PC was literally only one point different from someone else's) all from the same village, with the same accent, and all starting in the same place.

So why was it good? Because even though very few moving parts were in play Jeff made sure everything that was there mattered. How?...

-Every detail was given something to do in the adventure.

-Every single thing that happened made us afraid we were going to die.

Giant cricket? Have to climb a wall? Fuckfuckfuck. We were worried. Clever convention one-shot trick: he didn't tell us how many hit points we had. This was huge, but more huge was the logic that went into it. Every single feature of the admittedly sparse environment could have killed us--or at least that's what we thought. So we paid lots of attention to every nook, cranny and crawly.

"In the TV show the Sleestaks were just guys in these rubber costumes so they didn't move very fast, so you guys can easily outrun them."

"You're not sure you've knocked down all the stalactites but you sure made enough noise doing it that I get to roll again on the wandering monster table. (glee)"

-The adventure fit the social and logistical format

We had an adventure totally fit for a small group of players who didn't know each other, did not necessarily know the system they were running, and who wanted to be done in 2 hours. It required cooperation, but did not require spontaneous on-the-spot inter-PC or PC-to-NPC acting.

Jeff's descriptions were good, but really, if you looked at the transcript of Jeff DMing and the transcript of anybody else I played with DMing this week, you wouldn't see that many obvious differences. However, if you listen to the way he talks he projects this aura that no dice roll surprises him--it's all part of the story "Oh, well since you're still woozy from the smoke in the last room and you're distracted by the phosphorescent fungus you don't quite see straight and your blow glances off. Luckily your torch is still lit".

Again, there are not that many elements in play (no magic things going on to speak of, no complex NPCs, no list of individual skills for the PCs) but each element is there (light source, orientation, distances) because Jeff is fully invested in making it try to kill you, and so knows it, and knows how it works in this scenario, and knows how to describe a fight with it. It's like every threat, even if it's just a narrow ledge, is that end-of-level custom-designed boss the DMs been waiting to throw at you.

-Quiet but firm control of the flow of the game

I have heard "Ok, initiative time" probably 300 times this week. Jeff, on the other hand, went "All right, Anthony, please roll intiative for your side." Probably because Jeff is a con veteran and is used to groups of strangers playing and wants to keep the game rolling steadily along and knows all the little things you can do to do that without anybody giving you static. I don't know if Jeff runs things the same way when he has players who know each other but it works very well with players who don't.

-The "Jeffish" elements were the least of it.

Yes, there were Sleestaks, yes, Jeff described rooms with Scooby-Doo references, but these obvious hallmarks of Jeff's lighthearted gonzo-ness weren't the impressive thing. The impressive thing was how despite all this silliness, we were genuinely afraid to die and happy when we didn't and how very serious our little halfling lives seemed to us.
_____________

Rather than the aforementioned negligent and indifferent god, Jeff is a highly conscientious and amused one. Which is is equally scary, really.

Thanks for this. Very interesting to me.

This is a very interesting 'review' of a particular GMs way of doing things and provides valuable insight on tips and tricks that successful GMs use. Tis is a great thing and many should read it. Thanks for posting this.

It's nice to read a description of what people do like this... lots of reminders of why this game can be so much fun. Thanks for the peek!

I've got to run a D&D game for Saturday's 'Free D&D Game Day' from WotC. Depending on who shows up, I think I'll ditch the bland, written provided adventure and run with something a little more like Jeff Rient's game.

Fascinating overview. I can't tell you how interesting something like this is to me.

It is so different from my typical experience in so many ways I wish I had been there to observe it. Not necessarily to play but to watch it all unfold.

There is a lot of good advice implicit here.

The biggest difficulty I found was in not being able to shift eye contact between players. Also being tied to the same place was kind of weird. I usually prefer to stand up when I am GMing.

This was a fantastic post, Zak. Lots of useful stuff there. I'm always interested to learn how other DM's do things, especially old pros like Rients. Masterful DM'ing is such a complex, subtle, psychological art and one can spend a lifetime honing the skills involved. Thank you for taking the time to go into such detail.

Equally useful might be a report on some things that Google+ DM's did that DID NOT work so well (changing the names to protect the innocent, natürlich). Also, it would be interesting to reflect on which DM techniques did or did not work well specifically in the Google+ medium.

Thank you, Zak, this was most informative and reminded of some things I should do a bit more in my own game.

Awesome. I really look forward to playing with Jeff sometime. Thanks to this format Zak, you've allowed this to be a possibility. Next week I'm getting up at 4:00am to run Jeff through the DCC funnel. You're going to get tired of hearing me say this all over the place, but really, thank you so much for putting together and maintaining Consantcon. For the past couple of years, I've been beating my head against the wall trying to find players who are willing to try out the Old School. Now, I can run a game pretty much at whim. You have my sincerest gratitude.

I wish I knew a GM like that. Most of the ones I've played with have huge egos and get high on power.

Okay, LOL at that. I definitely do that.