Panic In The Hands Of An Indifferent God 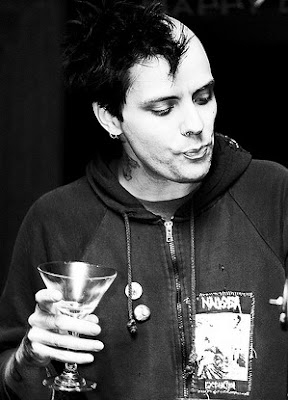 You are going down a hall.

You know what's down this hallway: The Plot.

The most effective demeanor for dealing with my current group is: act like Bill Murray drinking coffee while trying to get his cigarette lighter to work.

Act light, act negligent, act like you can barely remember, act as if telling them what's going on is the last of several things on your mind. No lush word pictures, no candles, no mood music.

This instills a gratifying panic in the players.

Conventional wisdom is: the DM acts engaged and fired up and epic and grand, and then the players get engaged and fired up and epic and grand. Maybe this is true with some groups, not mine. They start out engaged--they want their characters to do things, and they want to make sure things don't get done to them. They have shit ready to do before I even tell them where they are. They have armor classes and memorized spells and they dream big dreams.

So you tell them...almost nothing.

Inevitably I get interrupted at this point. A room? The players have a whole lists of things they want need must absolutely do to this room right now.

"What is it? How big is it? Does it have claws? Oh MY GOD WILL IT MURDER US ALL?"

"...Huh..mayyyybe...lemme roll on this chart...talk amongst yourselves for a second..."

They are wild now, asking questions, on top of each other, over each other. And they are paying waaaaaaay more attention than they would if I'd just bathed them in purple prose describing all they see in minute and mood-setting detail.

Because when faced with this, they need to ask questions, they need to observe, their characters' very survival depends on it and--this is important--even though I appear to be more concerned about getting another Oreo or cleaning a spec of something off my fingernail than I am about telling them what's in front of them, they know that I know everything they need to know.

And the fact that I don't seem to care that much either way about all these things that affect their fate terrifies them.

Or at least it serves as a heads up that they'll have to be very careful. Like when you play hide-and-seek and the kid who's "it" counts but doesn't count out loud.

In the most desperate situations, they hang on my every mumbled, like, uh...Southern Californian word. They mentally translate from contemporary american english into what this means in the fantasy world that they occupy. I don't have to do it for them. Since their characters' lives are at stake, they extract special meaning from a phrase like: "It's got three eyes and the third one lights up with, like, this sort of greenish, like..."

They are terrified because it appears I don't care. I am just relating the horrible things that will happen and making the world react the way the dice tell it to and I have zero interest in letting them know whether this is the right hallway or the wrong hallway or the horrific danger hallway or if this is "meant to be" a horrific scene or a heroic scene or what. They have to figure it out all on their own. This is far scarier and far more fun than making them sit through my HP Lovecraft impression every time they get into a new room. (And that would bore them and seem cheesey to them anyway--they are imagining the stairwell in all necessary detail already because they know they need to in order to survive.)

The terror and the engagement don't come from me being Vincent Pricey or Peter Jacksony and hoping they get into it, the terror and the engagement come from the players realizing in their own minds that this or that casually dropped word might just be the thing that kills the character they have so lovingly levelled up. And they like it, because now instead of tourists, watching amazing things, they are wrestling with the things, trying to extract meaning from a barely-landmarked world.

Because, of course, great short stories and great jokes have a lot in common. Both depend on what communication -theorists sometimes call "exformation," which is a certain quantity of vital information removed-from-but-evoked-by a communication in such a way as to cause a kind of explosion of associative connections within the recipient. This is probably why the effect of both short stories and jokes often feels sudden and percussive, like the venting of a long-stuck valve...Nor is it an accident that the technical achievement of great short stories is often called "compression" -- for both the pressure and the release are already inside the reader.

Further, this technique makes the game more about them than me, which is always good. I want to be like Nanny in Muppet Babies--show up, give them a new toy or rule or plot, then let them go nuts trying to figure it out.

FINALLY! Someone has compared D&D to Muppet Babies. i can sleep in peace now. Thanks.

I expected to see the Foster Wallace fragment end with: "...and that's why Vance rocks".

Continue to do insightful posts like this, and you'll ruin your reputation as a mindless destructive pornomancer who hates all that is good.

The segue from Wallace to Muppet Babies... brilliant.

I dread the day you run a session of Paranoia...

My favorite way of fucking with players and keeping up the suspense was to just randomly pick up and roll dice behind the screen, because they never knew when that roll meant something or if I was just playing with the dice for shits & giggles.

I love this. As others have stated you've effectively included some of the most relevant thinkers of our time (y'know, Wallace, Bill Murray and the Muppet Babies). Its also interesting to note that while I would wager all players show a certain degree of the same reactions your players do, you should consider yourself lucky as some need more 'outside stimulus'.

Of my current groups, only one will react similar to yours without a great deal more detail. The majority seem to need a picture painted before they can know what to feel about a scene or situation. One of the three groups is simply unwilling or incapable of doing anything if a significant list of questions aren't answered or details forthcoming. They freeze up in paranoid terror when confronted with a lack of information, gunshy from years of playing with killer DMs.

Likely I have one in the middle, creating a nice balance between the 'Surprise Us' party and the 'Need to Know' party.

Over New Year's eve, my family was watching "The Thin Man" and there's a scene where our hero breaks into a lab in the middle of the night to search for clues. The scene was incredibly tense, and my brother nailed why pretty quickly: there was no soundtrack to telegraph what was about to happen, whether he'd find a clue or a dead body or get caught or what.

Less is sometimes very much more.

I am so dumb, I only now realized what you are referencing in the title. Very funny though.

Hmmm, exformation, that's a good term, I like it. My own way of thinking about this same approach I've thought of as impressionist description. Give the players the hazey form of things and allow them to terrifiy themselves by filling in the details by jumping to conclusions.

Erkh. How much of this blog do your players read?

@Flinthart Haha. I read. A lot..but not all. It doesn't make that much of a difference since I know Zak and his style very well and so the blog isn't giving that much away really.

In my case I get annoyed and impatient if the DM is laying it on too thick. I have a very vivid imagination and have read Vance and Leiber and M.J Harrison and grew up playing Diablo II and Warcraft III and Zelda and all that. I don't need cheesy theatrics to help me visualize the obvious. It's D&D--we are in a medieval or possibly more archaic dungeon. Our world is covered in snow and ice so now then, let's continue with GAME!

Zak, I need to somehow get you together with the Nancon (former Con in Houston, Texas) Paranoia group.

Mandy, when my prose takes a purple shift, it is for MY entertainment. The players are just along for the ride. But Zak is right -- too little can be fun, too.