The Slaying Necklace - the module 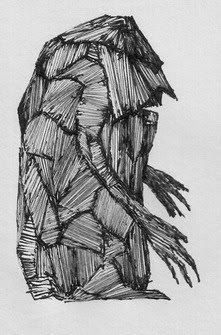 I have fixed "The Slaying Stone"--the thoroughly uninspiring Type IV adventure I was whining about yesterday via the simple expedient of hybridizing it with The Emira's Necklace, a short adventure James Hutchings was kind enough to post today on his awesome blog.

-Wolves and tower and other things from The Slaying Stone not mentioned below stay pretty much the same. Plot-dispensing NPC wants the necklace for the same reason she wanted the stone. It kills whoever wears it if they're in the town.

*Through the forest: roll once on the Emira's Necklace forest encounter chart (first two pages Emira's Necklace document) of. If the PCs aren't sneaky and make noise during this encounter, a goblin patrol (d4 goblins) will come out and investigate the noise.

*Over the river: there's a 4 foot wall with d4 goblin archer guards awake at any given moment on the far side of the 30' wide slow-moving, muddy river. There will be d12 guard awake or asleep total.

-There's no "kobold slum". That area of the map is actually the miniature city from Emira's necklace, room 2. The goblins used evil magic to shrink the foes they could not subdue and built on top of them. It's a very extensive miniaturized city, with goblin buildings built on top of it (the tiny city just covers the streets--in some cases the residents have built onto the sides of the new goblin buildings). The kobold encounters that are supposed to happen here are basically the same, but with goblins.

-Each round the PCs fail to be sneaky in town roll d10 + the number of times the PCs have fucked up so far. Any number over 5 indicates that many goblins are prowling nearby. Doing what? We have a table for that.

-The goblin monster pens contain Hollow Mockeries as per Emira's Necklace room 4. The goblins ride them.

-A crawling armwyrm (like the giant arm in Emira's Necklace) replaces the chatty dragon in the hot springs. Its lair is like rooms 9 and 10 of Emira's Necklace, though the mouths speak goblin, not dwarvish. It has half of the necklace--the other half is in the temple.

-The temple is like room 11 in Emira's Necklace. The pillar has half the necklace. The priests are goblin priests. Attacking the temple head-on without stealth will bring d20 +6 goblins running from outside, though the door can be barred effectively for d4 rounds. The temple will need actual dimensions if the PCs are going to have a real fight here and have any real escape plan.

-Draw a town map or grab one off the web. It need to have a river border, a forest border, locations 1-9 from the original module, plus a place for encounters 9, 5, and 13. So that's 12 numbered locations inside the town. The mansion, temple, and library should be in the center of town and identifiable at a distance--decide what distance that is. I suggest a town of 30-60 total buildings.

-Room 8 from Emira's necklace is actually implanted in the center of the goblin mansion (encounter 12). The bubble pit fills most of the antechamber with only a thin ledge on the end. Hu-Jat is just a jumped-up max HD goblin with a human mayor's hat on that falls over his eyes (thus his name). He has no bullshit munchkin "rage drake"--just the monster in the bubble pit. Hitching a ride all the way up on a bubble leads to a bell tower.

-For any unlabelled building roll on Emira's Necklace wandering monster chart. A roll of 2 indicates the Severed Eyes Orc Clan only reskinned as rival adventurers or a different tribe of goblins. They fulfill the same purpose in the adventure. A roll of 3 or 4 can indicate either the skeletons and tiny ninjas from the Emira's Necklace or just a regular tradesgoblin's home, depending on the DM's gonzo level. Any result rolled a second time indicates a regular tradesgoblin's home.

-If tracked at any given moment the Clan are at a random place on the map (roll d2o--1-12 indicates they're in place 1-12, numbers above 12 indicate they're in some otherwise unremarkable random part of town).

*Roll d4 for goblin type:
1-White goblins: always say the opposite of what they mean, walk on the ceiling
2-Green goblins: technicolor weird-weapon-wielding Warhammer goblins.
3-Red goblins: d4 hp per die but each utters a first level spell "curse" when they die.
4-Black goblins: Walk around inside the skins of the humans they killed taking the town. The skins don't fit very well. The effect is grotesque. Inside they look like white goblins, only shiny black.

I sit here and ask myself why they design modules like this. Without focusing on the living abortion they call the 4e ruleset, just looking at the modules, and analyzing why they suck monkey ass, I come up with a few things:

1. Railroad, no "real" free choices, just the illusion of them.

2. Expectation of defeating/completing it built in, with a certain xp expectations as well.

3. Whole thing has a certain "Care Bear" approach, where you don't want to let the pc's fail/get hurt.

4. Seems like they don't think that DM's and players can handle and/or create complex situations on the fly.

5. Goal seems to be to fight fight fight, with no possible expectation that the players wouldn't want to skulk around and avoid fighting---i.e. lacks the flexibility for other playstyles. (Some of this may be based on the fact that the only way to get xp in that edition is to kill shit---taking their stuff doesn't count).

6. Lack of imagination in the "you cant sell or remove the gem" and other ideas, so as to prevent creative parties from going apeshit crazy with whats in there and fucking up the DM's plans for the night.

7. Lack of details provided to enable players and DM's to take the module in any direction they want.

Feel free to add, modify or criticize the above.

It seems you could extrapolate some of their assumptions of their customers, based on the design choices they seem to encourage or endorse:

4. Players and DM's like to be rule-bound in the gaming.

Feel free to add, modify or criticize the above assumptions.

All this leads me to conclude that either

1. WOTC is right in their assumptions, and therefore we are doomed to never get cool new players out of the younger generations for old school games;

2. They are wrong, and they are dooming themselves by going after the least common denominator of player today, and crippling them by not inspiring their imagination, flexibility and creativity as players and DM's with cool new products.

Either way, they fucked themselves for the future. It's looking grim for the next generation of D&D'ers.

Yeah yeah, I know, you know someone who doesn't play like that, your games aren't like that, blah blah. Fuck you. I'm talking about the silent majority here though, the unwashed masses. You know, the D&D equivalent of the flyover state people. The D&D Rednecks. The ones who buy the shit and grow the hobby, and from whom we might get a few exceptional people to spring from the primordial ooze once in a while. That's who we lost here.

sure, but i'm just tryna write a module here

Yeah, maybe i shoulda dropped that comment in the other thread. hey, with the wondrous copy and past, i think i will. :)

i guess i'm just feeling contentious as the end of the world draws nigh...

Mamma warned you about playing Stormbringer

What does Slaying Stone bring to the hybrid over just running Emira's Necklace?

You get a grotesque, unpredictable goblin city instead of a funhouse. If you want a funhouse, by all means run EN.

You get a grotesque, unpredictable goblin city instead of a funhouse.

I guess what I mean to say is how much of the grotesque and unpredictable goblin city is actually derived from Slaying Stone to begin with? Versus if you decided "I want to set an adventure in a goblintown" and used pieces of adventure B.

There are things in the original which are sort of made lame by the original context--like the robot dogs or the goblin wizard, Norg, or the competing treasure seekers. To me, adding the EN material changes the context of the whole adventure and suddenly these things work much better.

Glad you got some use out of my module! But note that the miniature city is actually by Aaron Somerville, and the giant arm is from the American Barbarica blog.

This is how I like to use modules: like old cars at a Pick-N-Pull. I just pull them apart for ideas and inspiration, to make something that feels unique.

This method is really useful, as I can just pull-out a ready-made NPC, mapped area, treasure, or some unusual event, without having to invent them or make them-up on the fly. It may sound lazy, but I would rather pull in the legwork to have have a lot of ready-made stuff, so I can focus on writing the scenarios, when the time comes. Plus, I usually dont use them in an ad hoc way - I still like to flavor them with my own spices.

Great work polishing up that turd!

"Great work polishing up that turd" may not be the most complimentary phrase ever uttered.

Some pretty good fixes. Definitely opens it up a lot more for the players. Plus, your approach to Goblins in general is pretty Gonzo. I think a lot of WotC products treat them as simple stock villains.

Would be nice if you wrote out your slimmed downed version of the rules. Reading your blog on and off I like the simplicity of it all.

One mans turd is another man's gold. Even the lousiest dungeon will have a few good nuggets.. A few years back I ran a heavily modified version of EGG's " Dungeonland" were I changed much of the setting by giving it a more darker twist similar to what American McGee did with his videogame "Alice". Thinking back on it, it was probably one of the best adventures I ever GM'ed.

@iron: That sounds sooooo awesome! Wised I could have been in that game. I happen to like it loud. ;D