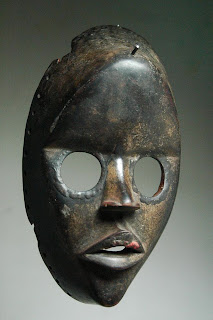 According to a professor I once had, our modern conception of the word "cool" comes from a West African concept. The climate metaphor was aesthetic and philosophical, pointing to a godlike aloofness, and a kind of simplicity-through-sophistication.

The theory being: to the Dan and likewise-situated folk, accustomed to a brushy, vegetal, detailed, and, of course, hot, world, the smoothness and cold geometry that more northern people might associate with winter and ice was something achieved, rather than (as in Plato) a natural starting point, or (as in Asian philosophy) something found (Buddhists tend to talk a lot about walking--especially up hills). In West Africa, you took a tree, which was a live, ragged, growing thing that stretched in every direction, and you cut and polished it until it became a sleek mask. Until it became definitely-not-natural. Or at least definitely not the standard product of nature. As alien to the surrounding textures as the smooth skins of women and men. 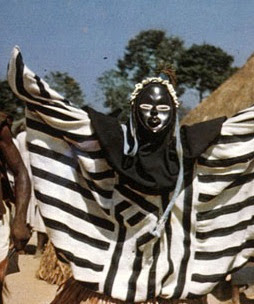 The Dan word for "cool" was used to describe, originally, finely made things, things which had shed the heaving, fecund irregularity of the ordinary world. The simplicity of the Buddha's face is childlike--the simplicity of the Dan mask is adult and athletic--achieved. What modern westerners see as a jarring, almost undead, contrast of these masks, when worn, against the reedy, unprocessed cowrie-shell-and-raffia look of the surrounding ornament is totally intentional. Western aesthetics see simplicity as rustic and uncivilized, our idea of "Asian" design traditionally looks for a simplicity-and-unity-with-nature. This is a sort of simplicity-despite-nature.

Or that, anyway, is what the prof suggested.

As everywhere else, the gods are wise and refined kings, it is merely the signifiers of their wisdom that change. The nature of their power is: they do not care, but they might be convinced to care. It is merely the style of their indifference that changes. Modern popular gods do not care because you'll get your reward or punishment after you're dead, Norse gods didn't care because they were busy fighting, Greek ones didn't care because they were busy fucking--the Dan gods fucked and fought too, of course (naturally: they're cool), but that wasn't why they didn't care. 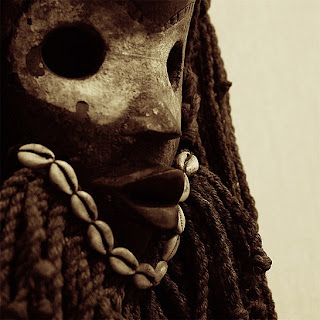 In any culture, whether the boss is a king or a pope or a tax collector or a god, the boss's job, aesthetically, is to impress the rubes. This is done by simple contrast: the landscape is one thing, and what the king has is the other. As much the other as possible. While the boss's architects and artisans have only this landscape and their own imaginations to draw on to figure out what it should all look like, they do their best.

In the myths of the West Africa, every animal has a passion and a scheme--cool indifference in the face of these creatures and their 24-hour seething fuckmurderfest might indeed have seemed truly artful, artificial and magical.

And we must agree, because now we're totally willing to call everything good "cool".

'Cool' is a weird word... perhaps because the word has become so meaningless from overuse.

Wow. Impressive and fascinating. As a fan of religion, philosophy, and etymology, I've just popped a proverbial brain boner.

Another reason why Art tends to favor Childlike innocence (as with the buddha, the baby jesus, etc) in more technologically advanced societies, whereas favoring adult forms in less advanced societies, is that sometimes you wish there was shit you just didn't know.

In developed societies we idolize youth and "innocence" or at least the perception of innocence. In a tribe with no clear knowledge of food poisoning, germ theory, and in some cases only a vague sense that sex might cause reproduction being an adult seems pretty fucking awesome.

The Chinese Taoists all retreated to cooler mountains to seek unity with the indifferent Tao:

Taoists also spoke of becoming like an "uncarved block."

Capheind: It might just be my romantic notions of 'the savage' asserting themselves, but I'm under the impression that the less technological societies often believe the right things for what we from the more technological societies would call the wrong reasons. We would say eating undercooked or spoiled meat is a bad idea because of parasites or the risk of food poisoning; other societies say there is a religious prohibition against eating certain foods --- in both cases people end up avoiding foods that can kill them. Not every tradition is beneficial, but so many of the common ones really ARE good ideas that I don't think what becomes 'taboo' is always just ignorance and superstition --- it can be a form of survival tactics. Most of us modern people don't know the difference between a germ and a virus (and we don't need to; we have experts for that), so the technical terms are pretty much like saying, "Eating undercooked meat makes the gods angry and they will probably punish you by making you sick." We accept the reasoning without really understanding it.

I think the term "cool" came into modern English from "cool jazz." I've heard that Lester Young popularized the term (to distinguish it from earlier "hot jazz").

Sure. There's a parallel in "hot" (petwo) and "cool" (rada) voodoo. The "hot" entities are rougher, meaner and just plain destructive -- sources vary whether they're native to Haiti or originate in kongo rites like the nkondi nail fetishes. The "cool" people come from cosmopolitan Dahomey and are plenty easy people.

Jesus you're amazing. This... I wish I had something to contribute. Thanks for making the word Cool amazing again.

I am glad I read this. I had no idea.