I've actually drawn a bunch more of the Fiend Folio do-overs but the drawings aren't near my scanner at the moment. However, for the sake of stocking my own dungeons I'm going to just list off all the changes I've made or am planning to make to the Fiend Folio monsters now. Hopefully I'll get around to scanning and drawing them later.

Meazel: A meazel is the result of a kind of disease transmitted by a certain kind of goblin, it turns one of your fingers into a demonic biting monster.

Meenlock: I drew this and can't remember. I think it was some kind of psychedelic vertigo-inducing giant-head monster.

Mephit: original Folio text: "...they will wear clothes of the most garish design and color possible." Kinda like an evil leprechaun with funny hats, smoking pipes, looking like a demonic Mad Hatter.

Mezzodaemon: Oh I made some disturbing thing for this. Can't remember.

Needleman: Did it as a humanoid with narrow 20-40-foot bent-back legs terminating in needles.

Nilbog: Largely as-is, but as a sort of goblin-magic-created champion.

Osquip: Ecologically the same, only it's got no real head and a four-way flowerlike opening where the head should be like the Predator's mouth.

Penanngalan: Like a Vargouille but it doesn't fly, it walks using its entrails and casts spells as a witch.

Pernicon: It's like the Caterpillar in Alice but doesn't speak. Just gestures, offers tea. etc.

Phantom stalker: It actually stalks phantoms. A witch hunter or cleric that has undergone necessary rituals to be able to directly touch the undead. makes them nuts.

Protein polymorph: fuck this thing. ok, fine. A Protean is a giant-sized monster that's been verrrrry slowly turning from one thing to another over the course of 200 years. It'll be in some half-state. or half-made by the gods.

Quaggoth: No, "Othuagg". Like those long-nosed Guinea Babboons but goblins take them and dye them and drug them and make their hair and spike them up like John Blanche's Brat Gang pics from the original Confrontation 40k game and send them to kill you.

Quipper: You know those fairy tails where someone catches a fish and it asks them riddles or whatever? That's a quipper.

Qullan: Kinda like the original, only all female and Amazon and crossed with Mulan.

Retriever: It's the size of a normal spider. It crawls into your ear and whispers to you that you need to come with it to hell.

Revenant: A Kafka-esque soulless husk of a person--performs duties it had in life anyway.

Rothe: It's a mopey livestock creature that's sat in the same place so long that lichen and mold has grown on its back and the mold's gained intelligence and they have culture and whatnot.

Sandman: Basically the same. Only they wear clothes and disguise themselves.

Screaming devilkin: its a gargoyle that's stuck in one place like the carved ones at Notre Dame. otherwise the same.

Shadow demon: "Demon's shadow"--if properly severed, at the right moment, a demon's shadow can be a useful servant or a terrfying opponent.

Sheet ghoul/phantom. Burying someone in a sheet that certain acts have been performed upon brings them back undead.

Skeleton warrior: like a regular skeleton but covered in mystic clay that makes it look like a human at first, the clay is carved with runes and shit and dyed in blood, slowly strips away as the champion takes damage.

Slaads: pretty much the same. at war with the chasme.

Son of Kyuss: This is a tiny lich made from a child prodigy evil cleric.

Stunjelly: you slather it on you and then attack. if you're nuts.

Sussurus: it is more abstract, and it can be bent into specific shapes to enunciate specific spells by powerful druids. kinda like the thing in Death Frost Doom.

Svnirflebenfm or whatever: the deep gnomes are just emaciated dwarves who have stared too long into he secrets of the earth. become totally insane, primitive, obsessed with lovecraftiana. bad earth magic.

Symbiotic jelly. It's just a sort of alien goo that gets on monsters and parasitizes them and makes them hungry. Makes creatures tougher and more hostile. also acts as stunjelly. stunjelly is actually dead symbiotic jelly.

Tentamort: I love you just the way you are.

Thork: A trap laid by the redone aaracockra. looks like a stork but is full of scalding water.

Throat leech: a circular, toothed leechmouth appears on the victim's neck. makes it hard to eat and talks. like "the man who taught his asshole to talk"

Tiger fly: goblin bioweapon-- so-called because their bite marks foes with stripes--identifying them as enemies of this or that tribe of goblinkind.

Tirapheg: basically the same, improve the mechanics a little.

Trillloch: goblin espionge tool: Takes the form of a human woman who urges her husband to kill political rivals and their wives. The trilloch then eats the dead wife and changes to look like the dead wife, then urges the wife to kill various rivals, on and on forever etc.

Tween: A "Between". Takes the form of an ordinary animal. Often a black cat. Transfers bonuses from a PC's companions to him/her. A divisive opportunist hoping for murder.

Umpleby: an imp that preys upon small-time politicians. explains things to him about how things should go. greedy.

Urchin: "Emperor urchins" 15' in diameter. They roll across desert. Like Baron harkonnen crossed with a spiny ball. They roll and threaten.

Vision: a hallucination but the more creatures that believe it the realer it becomes. more and more hp.

Vodyanoi: Like an emperor urchin but it lives in rusty water and is made of rust.

Volt: a squat steampunk golem that delivers a jolt.

Vortex: another steampunk device--interlinking ring device with hula hoop-sized hole in the center, sucks you in.

Witherweed: or Witchgrass. Its the stuff surrounding the witch on the cover of the first Sabbath album. touching it causes things to decay faster, burning it release the spirits beneath.

Xill: similar, but alien, not ethereal. and no legs.

Xvart: they are to goblins what Dwarven Trollslayers are to WFRP. Fanatical, dyed maniacs. Dyed blue.

-Someone has decided to few the whole Manual from Pants this is a Catoblepas... 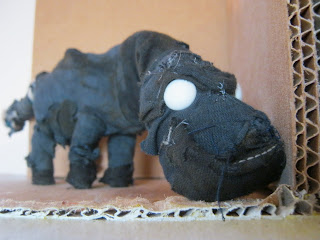 -Then there's this classic.
-And if you've got 18 minutes to download something, check this monster out.

The Sussurus appears in the old White Dwarf scenario "The Licheway" in which it performs the same role as the thing in Death Frost Doom. I asked Raggi if this is where he got the idea from; he gave an enigmatic but positive response.

I may have already mentioned that I would buy a Zak S. monster book in a heartbeat...

the vargouille renders it redundant.

That monsters made from pants thing is priceless. When William Gibson, Al Gore and the Pentagon came up with the internet, if you'd told them that someday people would be using it to do stuff like that I wonder what they would have gone through with it?

I really like this too. There's an entire subculture of bestiary enthusiasts out there... (Pick your own "bestiality enthusiast" joke and have fun with it.)

Also, you are probably the only human being on planet earth to have ever written the sentence "The Vargouille renders it redundant." Kudos.

Does the Umpleby have anything to do with Sir Humphrey Appleby by any chance?

I wonder if there's some annoying ____ppleby in earlier literature (wodehouse?) I and the screenwriters were both unconsciously channeling.

I'm glad I'm not the only one who got that impression from the illustration of the pernicon.

I think the only one of these monsters I've used totally unmodified in my game is the mephit. I particularly liked the Planescape expansion of them, which gave them all different sets of personality flaws and irritating habits, like ooze mephits heap flattery on you and then ask to borrow money.

The skeleton warrior in my game roamed the dungeon butchering monsters when it encountered them and arranging their parts serial-killer style in rooms the party would later find. When they actually met it, it was non-hostile unless provoked since it had that whole searching for its circlet thing going on, but that was far from obvious and they were intimidated enough that they ended up running away both times.

For the trilloch, which as it's written is probably the most useless monster ever invented, I created a series of rooms in the dungeon that were serene and beautiful and peaceful, with healing water and natural light and no threats of any kind. When the players inevitably started to doubt their senses, those who made their saving throws woke up lying on the floor in a bare stone room, freezing cold and weak, with the thing in the illustration hovering above them sucking out their life energy. They managed to drive it off and stagger out before their ability scores were reduced to zero.

Did you ever end up scanning these? I'd love to see them.