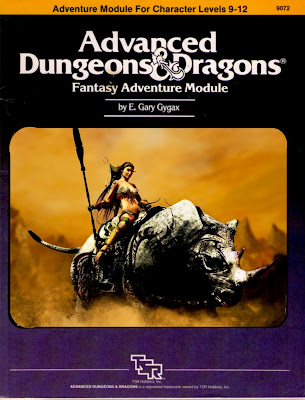 (digital art by this person. if s/he objects, do let me know.)

In abstract algebra, the concept of a module over a ring is a generalization of the notion of vector space, wherein the corresponding scalars are allowed to lie in an arbitrary ring. Modules also generalize the notion of abelian groups, which are modules over the ring of integers.

All in all, this is a fabulous module about modules.

Mandy loved that. Now she wants me to run a Sword and Planet 40k campaign.

"Rhino Riders of Veringia" doesn't cover any new ground, but it does have a certain sword-and-sorcery flair that has been lacking from modules of late.

"Rhino Riders of Veringia" opens with an overview of the blasted plain of Veringia. Spoiled in ancient times, the Veringian landscape is highly inhospitable to travelers, and has few permanent settlements. The only truly permanent, noteworthy feature is the Red Rock of Ruin, a spire of the same crumbling red rock that composes most of the Veringian landscape. However, it is honeycombed with caverns, and a great labyrinth stretches underneath. This part of the module details the prehuman creatures that once made the Red Rock their home, and talks briefly of their fate.

The next section details the titular Rhino Riders. All female, the group is a group of paladins that ride the lumbering, carnivorous rhinoceri of Veringia, guarding the ancient entity living within the Red Rock.

The next section is a collection of rumors, story hooks, and items that may entice player characters to Veringia, and more importantly, to the Red Rock of Ruin. The entity within the Rock, it seems, wishes to be found and released, and so telepathically "seeds" portions of its essence into the local wildlife, forcing them to go and pass on its memetic form. At least one physical portion of this entity, the Lantern of Ulb, exists, forming another link to the Red Rock.

The final portion of the module details the wilderness of Veringia, and the Red Rock itself. The encounter locations in this section correspond to the map on the cover, as usual. Random encounter tables account for both monsters in the labyrinth as well as the Rhino Riders trying to prevent access to the Red Rock of Ruin.

Finally, the Appendix recommends some inspirational reading, and details the society of the Rhino Riders for any character wishing to join their ranks.

Be prepared to catapult your players out of their comfort zone with 'Amazons of Rhinoria', the latest mid-level module for Advanced Dungeons and Dragons! Gary Gygax, creator of AD&D, teams up with Chinua Achebe, author of Things Fall Apart, to bring to life the Africa that existed in the magical beliefs and rites of Nigeria's people. Forget creeping forward in musty European dungeons 10 feet at a time, here Gygax and Achebe give you the entire Plains of Dusty Death to explore! Can your PCs survive random herd encounters of hundreds of stampeding animals, stealthy bush snakes, and the hidden city of the Amazon Rhino Riders, to win powerful tribal magic items such as the Stool of Chiefs, Mask of the Ancestors and the Never Ending Palmwine Tree? Can they triumph over the Spirits of Returning Children and the Ten Tribes of Men and their feudwars, as well as the encroaching Church of Saint Cuthbert that sees to destroy the Great Ancestor Spirits and Witch Women who attend to them? Includes the new mechanic for Honor and complete rules for rhino mounted warfare, childbirth, and palm tree tapping.

It'll be tough to top what James wrote but here it goes.

The module "Marathon of Dust" was a decent departure from earlier adventures and Gygax definitely gets points for trying something new.

Rather than hack n' slash through another dungeon, "Marathon of Dust" gives players the chance to participate in a race through the Chali Wastes. The Wastes are incredibly inhospitable so each participant in the race is allowed to bring a mount of their choosing.

Rather than just including mounts to buy, the module actually gave a side quest for players to go catch their own from the surrounding area. The rhino on the cover is just one example. There is actually quite a variety, and players should enjoy it as a tactical decision. The rhino fights like a tank, but players can also ride giant scorpions, lightning fast cheetahs, and serpents that grow wings in the presence of magic.

I felt the race itself could use some modification though. The speed penalties for encumbrance could be a pain and for some reason the writers assumed all of the players would travel as a group for the entire race. Since there are only first, second, and third place prizes at the end, players will often fall to in fighting mid-race. This would be fine if the in race's skirmishes didn't seem to assume the players would always work together.

One of the prizes at the end is access to a legendary oasis. This is actually structured as mini-dungeon planned around the players still riding their mounts. It's a nice touch that really seems like some thought went into this module.

The players can even find stables that will take care of their mounts while their off adventuring. This way you don't have to worry about taking the mounts away from the players and you can always bring them back if you want.

I have a very complicated relationship with the Horn-series of AD&D modules, starting with the premier offering, Hornriders of the Forgotten City by Egbert Gary Gygax (no relation). Released in 1986, it kicks off what is probably, after the Isle of the Ape adventure by Ernest Gary Gygax, the least well known series of Dungeons & Dragons modules released after the more famous Gygax's exit from TSR. Lorraine William's attempt at keeping a "Gygax" involved with D&D was a dismal failure. However, once upon a time, I owned all three modules in the series and actually used them extensively as the basis for many adventures, inspired less by their actual content than by the rough ideas behind it all. Even now, a cabal of evil rhino-riders strikes me as great recurring antagonists in a D&D campaign, so it's no wonder these modules struck my fancy way back when. Or maybe it was just the cover.

Unfortunately, Hornriders of the Forgotten City is not a particularly great module. Its premise is that the characters have been teleported from their own city by a drunken epileptic wizard into the deep deserted plains of Hornyria, a wretched hive to all manner of disreputable outlaws and exiles, where, beneath a ruined keep, a band of hornriders have their headquarters. It's the characters' job to find that headquarters and strike a bargain with the riders to help them in their long journey home to more civilized lands. They have to suffer many harsh and cruel challenges before the riders will trust and coooperate with them. It's not a bad set-up for an adventure, but, as written, it's a lot less interesting -- or challenging -- than one might expect.

There are a number of memorable "set piece" encounters in Hornriders, it's true, and the new creatures introduced in its pages, the dingy djinn of the dunes and the morphic sandgangers, are a nice change of pace. Unfortunately, the bulk of the module fails to follow through on the promise suggested by either its premise or the atmosphere it evokes. The result is a fairly lackluster adventure made up primarily of charisma saves and drawn out role-playing encounters, with very little combat and treasure gathering opportunities.

This is probably because the Horn-series were originally created as modules for use in AD&D tournaments at LorrCon, a new gathering being set up by TSR. Indeed, a significant part of the adventure's page count is taken up with details pertaining to its use in tournaments, including pregenerated characters (like Elkikya, a half-elf-giant cleric/fighter whose name is clearly a play on her favorite form of attack. Viewed in this light, the limited nature of Hornriders becomes more understandable, if not necessarily more forgivable. Once again, I find myself reflecting unhappily on how often TSR repackaged material produced for tournaments to sell to gamers for use in their home campaigns. It's little wonder that the subsequent development of the game turned out as it did, given the impression so many of D&D's official modules gave about what constituted a "good" adventure.

And yet, as I said above, I still have fond feelings for Hornriders of the Forgotten City. I don't believe I ever used the module as written, instead taking it as a springboard for my own ideas. I took the maps, the basic premise, and the new monsters, and then went off in my own directions with them. That says very little about the actual module itself, of course, but there's still a part of me that wants to impute some of my own youthful creativity to what was presented. That's got to be worth something, right?

This module epitomizes the worst excesses of "Hollywood Gary." This was clearly the product of self-indulgent bloviating, born from a California hot tub full of naked, coked-up, B-list starlets.

The only worthwhile part of this otherwise utterly wretched desert hex-crawl is the cover.

Well, that, and the seven pages of new types of polearms, lovingly--indeed, creepy-obsessively--illustrated, most of which ever existed in nature. Which, if you're into that sort of thing, is the sort of thing you're into.

The rest is straight-up phoning-it-in Gary, with whole plot points clearly lifted from S3 and the G/D/Q series (with tatooed elves and their war rhinos standing in for Drow and their giant spiders). There's no reason to buy this module as something to play, and there's damn little inspiration in it either (unless, as previously mentioned, you have a fetish for polearms).

As a collector's item, it's nice to have. Bootleg PDFs are available from the usual suspects, if you want to glance over it. Don't pay money.

I would just like to say that Arkhein's response made my day.

@Arkhein, you must give me your address so that I may kidnap you, spirit you away to my house in a zany cross country adventure involving Burt Reynolds and Dom DeLuise, and run this for me.

Grendelwulf:
"I have a very complicated relationship with the Horn-series of AD&D modules..."

In Rendition to the Poser Planet, the characters are transported to a futuristic alien land called the Uncanny Valley, ruled by a computer. Fortunately they are aided by a group of huge-haired warrior women from the planet Elmoria, and by a living fungus called Erol Lotus.