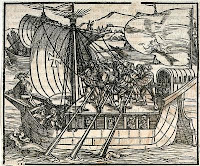 Roll d12 to see who's got room for passengers...roll twice at larger ports, roll thrice in a real big place.

Boats have purposefully been described so that even if you know fuck-all about sailing you can still use them. The "number of sailors" refers to the number who can be called upon to actually do sailing stuff at any given time and is based on me making it up based on what are easy numbers to deal with if a vessel gets in a fight and if you want better numbers and are that kinda GM, use 'em.

"Handling" refers to Dex or Int or Sailing Skill, or whatever stat you use in your system to do sailing checks, on a 3-18 scale.

1. The Frogsgut A wee small ship. It'll be just the PCs and the captain, one Othrok Grood. A capable fellow--handling is 13.

2. The Rankle A suspiciously saggy fishing boat. Crew (d4+1 of them) is smiley, soused, and amused to have adventurers around--handling is 13 normally (happily drunk), but in danger it goes down to 7. The captain--Throllo Morrthra, keeps d100x30 gp worth of good in the hold. The crew will catch enough food for everyone to eat in all but the most desperate waters.

3. The Enormous Enormous: 4d6 + 3 crew. Handling is average. Sprooveyle Sprogan is the captain, and he has pet weasels. One of the sailors is a fetching and heavily tattooed lass. There are crewmen who'll be violently jealous if a PC flirts with her. If the PCs prefer the company of the strapping young seamen, this lass herself will be the jealous one--and will turn out to be a quite a capable duellist.

4. The Silence A lorevessel of the Church of Vorn--takes passengers. The monks and churchmen are average sailors--handling 10--but are 25% likely to have been gifted with a cure disease or cure light wounds spell on any given day. d4+2 crew.

5. The Drowner Crewed by fierce northmen, making a little cigarette money between pillagings. Handling 10 but 14 in battle. Three-toothed Captain Vorce has a raven, secretly tattooed with a treasure map beneath its ragged black feathers. 4d4 crew.

6. Grakthreel Exis Vail A merchant vessel far from its home in the archipelago ruled by the reptile-riding Dark Elf princes. The small elf crew (d4+1 sailors) is suspicious and does not speak common, but will take passengers for four times the normal price. They are excellent sailors--handling 15. They keep a strange lizard in the hold, and navigate by means of incomprehensible but curiously detailed maps.

7. The Dracolisk A stylish but unexceptional vessel. 3d4 crew. Handling 11. Two mad lords--straightjacketed--are among the cargo. They're being returned to their family for a considerable bounty but will offer the PCs thousands for their freedom.

8. The Prolix An odd-looking ship, patched with brass plates and tubing. The idiot captain--Chovo Whitewort--and his stupid crew (d4+3 of them, handling: 9) have been hired to ferry a wealthy but eccentric alchemist named Palaver around on his various researches. Palaver will pay half the PCs fare if they're going someplace "interesting" and will offer to buy any unusual substances off of them for a fair price.

9. The Vasty Deep An impressive vessel with a reliable crew--handling 13, 2d6 sailors. There is a very capable thief aboard, however, disguised as a pilgrim. She will use any distraction as an excuse to rifle through the PCs belongings and steal their most valuable items. If they're careful, she'll just backstab one as the PC's coming out of the privy. The thief's destination is closer than the PCs' and she'll attempt the theft as close to it as possible. If anything she's taken is important or magical, she'll run off and immediately sell it to the craziest, weirdest NPC villain she can find.

10. The Grackle Kind Captain Cork knows not that his 4d4 gangly, lotus-smoking crewman plot against him. They suck at sailing (handling 8) but fight as 3rd level fighters. They will mutiny at the first sign of trouble. Kind Captain Cork will pay the PCs mightily if they defend him, and will be a staunch ally thereafter.

11. The Glabrous A rickety-looking ship. Failed control rolls will result in two rolls on the ship gimping table. There is a rival adventuring party on board, mixed in with 2d8 other passengers. If the PCs are too loose-lipped, they may have competition during their next treasure hunt. The 3d6 crew are handling: 12.

12. The Butcher's Feast Captain Laszlo Groyle and his 10 crewmen (handling:10) are probably harmless, and the cargo is probably innocuous, but if you ever wanted to do a werewolf-on-the-ship or actually-the-whole-ship-is-nine-polymorphed-sea-ogres adventure and haven't done one lately, this is the time for it. If you would like something horrible to happen on board, have at it.

13. The Figgy Pudding It was fine until the ship's cat died. Now it's infested with rats (hard to figure out at first) and the diseases they bring. Food stores (including PC rations) will be nibbled away/spoiled by infection at 33% per day. PCs themselves must save or con check every 3 days to avoid catching something. Crew dies at 1 every 5 days. Starts with 2d6 of them--handling 9.

14. The Esquivel Currently hauling slaves. Lawful good characters may have issues with this. A slave revolt is eminently doable here and the 2d20 slaves will be grateful (though only 5% will speak the PCs language and only half will be able-bodied). One slave is a starved cleric devoted to (some of) the slaves' foreign god and may be the first to make contact with the PCs. The 3d6 sailors are kinda incompetent and drunk --handling 9.

15. The Despot The crew looks like a bunch of fun-loving, mead-swilling vikings (as 5, above), but they're secretly religious lunatics seeking to sail to the Land of the Dead to recover the souls of their fallen fellows. They aren't sure where the entrance is, though, so they may believe the PCs if they say it's coincidentally wherever they're headed.

16. The Spinnifex A bunch of flighty nobles on a pleasure cruise who'll take the PCs on because they think they're funny. d8+3 servants man the small vessel and suck (handling 8). The kids are annoying and if the PCs have anything to do with them they may manage to get the PCs inveigled in a blood feud before the journey's over. 3d6X100 gold in the hold guarded by 2 surly 5th-level fighters named Chuk and Grubble.

17. The Bastard A small ship. D4 able crew--handling 13. One passenger is a wild-haired crone who kills seagulls with her sling and reads their entrails. She will pronounce the PCs fates for free. She will pay 300 gp each if they will sneak her behind the battle lines of the barbarian hordes that razed her land, to the site of her defiled temple so she can pronounce a curse that will slay every child born to the horde for 6o years.

19. The Dead Sunrise The ship's leaving port despite a slight list to starboard (10 degrees). The crew is mundane (2d6, handling 11) but the cargo is exotic--rare jewelled snails, an ocelot, a blue tiger, an ink pheasant, etc.--all destined for the private zoo of Khan Ferox.

20. The Dumb Spike Remarkable mainly for how much the (2d10) crew suck. Handling 6. PCs must save or con check successfully every other day or be seasick. -2 to everything until they've spent 2 hours on land.

Alternate for if you roll the same boat twice-

The Fatmeat Captain Walther Fryne has a minor Ahab complex, and its object is a fishing boat called the Bleating Hobble captained by his ex-wife. His 2d6 crew are disciplined--handling 14. One sailor keeps an unusual object in a chest under his bunk which he acquired on the Isle of Oth: a fleshy sphere, the size of a grapefruit. It is covered in mouths, each of which constantly relates speaks--in a different language--the sins of a different random living denizen of the planet.

I dunno. I think Calrissian may feel like one of the player's still owes him a gambling debt.

While I recognize that the point of this list is not historical accuracy (as you yourself pointed out), you might want to bump up crew sizes a bit. The HMS Rose, for example, a British 20-gun frigate that fought in the Revolutionary War, was a tiny ship by Age of Sail standards – and had a crew complement of 160. The HMS Victory (a 104-gun behemoth) had 850 officers and crew. If I were a player and a pirate ship with 5d4 crew was coming after us, my first reaction would be "don't say anything to make the DM feel bad."

I was thinking "don't say anything to make the commenter feel bad" but then I was like, well, someone has to say it.

"The "number of sailors" refers to the number who can be called upon to actually do sailing stuff at any given time and is based on me making it up based on what are easy numbers to deal with if a vessel gets in a fight and if you want better numbers and are that kinda GM, use 'em. "

I shall not bump up crew sizes.

@Zorvox: The crew sizes you mention are for WAR ships, which typically carried far more men than were actually needed to sail the ship. Cannon crews, boarders, marines, etc. A merchant ship would not need as much crew. Zak's crew sizes are fine.

Even though I don't run D&D in any form, I still read this blog, 'cause it's awesome. This list, however, I can use. I'm running a sword and planet Mars campaign and this will translate to Martian airships handily. Thanks!

Great ship descriptions! I'll definitely have to crib from this for my next game.