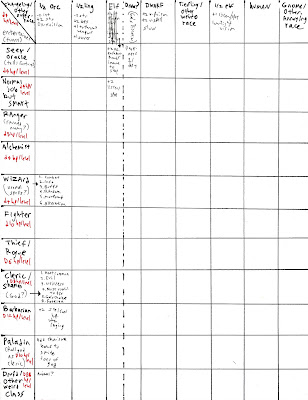 This is not-simulationally-weighted chart for generating levelled NPCs with a single die roll, so it's good if you need NPCs fast in the middle of the game--especially if the players are watching.

(For some classes, there are additional rolls that can be used to generate class-specific details.)

To generate a whole party of NPCs at speed (a task for which this kind of chart is unusually useful) drop a handful of D4s onto the chart.

To generate a higher-level NPC you can either use a bigger die (note: dice larger than d4s tend to roll and slide a bit and so possibly roll off the chart, though you can put the chart in a box top and roll that way) or you can interpret the d4 as being like: a 1 = PC level minus one, 2= PC level minus two, etc. Or whatever variation on that fits the situation.

____
p.s. The guy who published Vornheim will yell at me if I do not point out that that fine publication pioneered tables like this and has some in it so, y'know, you should buy it.

"(note: dice larger than d4s tend to roll and slide a bit and so possibly roll off the chart, though you can put the chart in a box top and roll that way)"

d6 is fairly stable, as long as it doesn't have rounded corners, and d12 isn't too bad. But this is why I switched from box/line dice maps to radial dice maps: with a radial map, it doesn't matter if the dice land off the sheet; just extend each pie section out to infinity.

True enough: though in this case, to get the same number of results in a radial set-up you'd have to either make "dartboard"-style concentric sectors (and measure them somehow to match average spread) or write out all 108 possible results in the pie sectors.

i.e. The advantage of the grid is you can make your own chart fast. Though I freely admit that's not necessarily -always- the most important factor in designing a chart.

On average, how many of these random charts do you actually use and how often do you use them?

For example, do you use two or three per game, one time each or three or four, two times each or whathaveyou? I'm just curious as to how often random charts are consulted in a given session.

Varies wildly depending on the type of adventure and the location and whether I had time to prepare. Like last session of D&D was at sea, used the Wavecrawl tables several times an hour plus various others--3-5 charts or tables an hour. Last FASERIP session I used about a table an hour.

Other times, not at all.

Since these kind of random charts are fun for everyone, it is good to have them, so even if you don't use them in a session, you wish you had.

They are like miniatures: unnecessary to run a good game, but definitely fun and helpful.

Interesting. Have you ever run a session without any such charts? If so, was there a different feel to the game compared to how it usually goes?

Sorry to ask what may seem like silly questions but as you've been posting these often recently I've become curious as to their actual use in play.

the overall feel of the game with and without tables tends to be the same.