H in the Fiend Folio is for "Ha ha! You bought this book? Choad." No flail snail or githyanki to raise the curtain of gloom. Just some dumb animals and a dead guy. Let's tackle it...

The main thing you'll notice about the Hellcat other than it's indistingushability from other cat monsters is it's size L. I figure: Hell is inside these cats. You have to crawl into their hellmouths to get there. 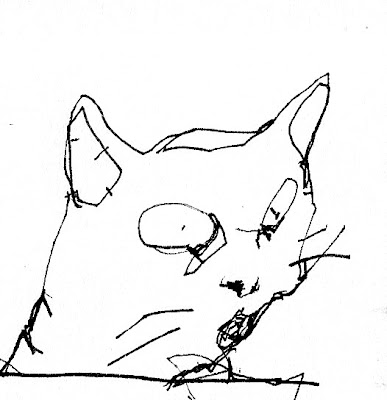 The hoar fox has one of those names like Jonson the Hammer that probably sounded real flash in 1292 but now just sounds like some troglodyte troll blogger's attempt at a bad pun. Not a bad monster though--icy fox monster. Sure, why not? To distinguish it mechanically from a winter wolf and things like that I feel like it needs a better thing than frost breath, though. 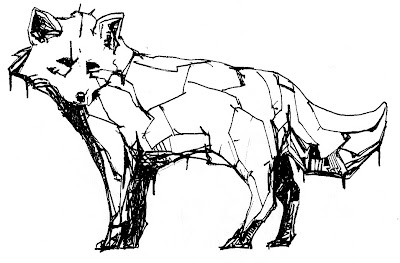 (The scale is goofy: little animal, big cone of cold. Too Looney Tunes.) Starting with how that guy said a fox hunt is supposed to be "The unspeakable in pursuit of the inedible" let's say the White Fox tricks polar bears and giant lynxes and other polar megafauna into eating it. These animals then freeze to death from the inside out because of the iciness of the fox, and then the clever fox eats them. Suck it, borealan apex predators. 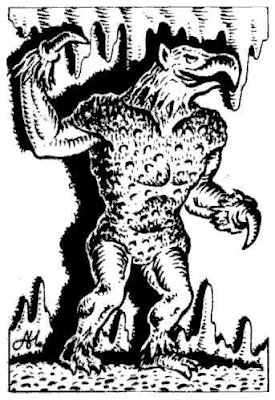 I think they meant to call it the Hook Fucking Seriously Fucking Really Why? Fuck You We're Not Trying. Like idiots, they keep using it even now: 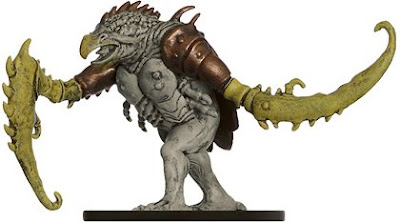 Not only have they made hook horror minis, they have made more than one kind of hook horror mini. And I still can't get a flail snail mini. And Jeffrey C. Jones is dead and Grover Norquist is alive. ANYWAY, here--I will show you horror in a handful of hooks:

The secret horror technique I have ingeniously employed here is to not make the monster look like the fucking buzzard from Woody Woodpecker.

Necromancers take note: How you make a hook horror is you tie up a victim, dip them in various hermetic herbs and spices, replace his or her hands with hooks, hang him or her by said hooks, and leave them like that for a million years. Then they slowly stretch out, then you re-animate them and voila: a horror.

Now the Hornet, Giant...I have a scale issue with giant flying bugs. Somehow those papery wings all gigantic and flapping at helicopter speed just doesn't work for me. Maybe it just seems too technological. Or too Ferngully. Anyway, new crawly giant hornet: 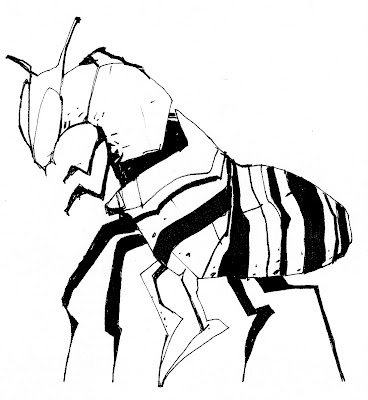 The Hound of Ill Omen is another goddamn dog monster, though, to be fair, it just shows up and portends doom and leaves, so it's not just another demon dog/hellhound/barghest. The mechanics could be handled better than in the Folio, plus it doesn't give a compelling reason the hound is there in the first place, but this is all doable: tie the appearance of the hound to the PC actually doing something and tie the doom power to an ill fate. I -no plug intended but it's unavoidable here- suggest using a variant on the Fortune system in Vornheim for the dog's curse.

As for the Hound itself, it should definitely look more fucked than the one in the Folio... 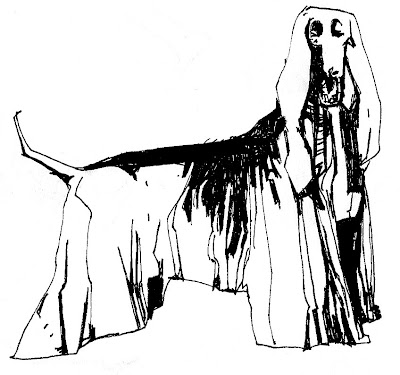 Now the Huecuva as presented in the Folio is just Another Fucking Skeleton. But thanks to this Dragonsfoot thread I know it's supposed to be some kind of MesoAmerican monster. Which is fine because there aren't really many good D&D monsters in this semiTecumelian vein. So I sent it to Pre-Columbian Ecuador for some redesign work... 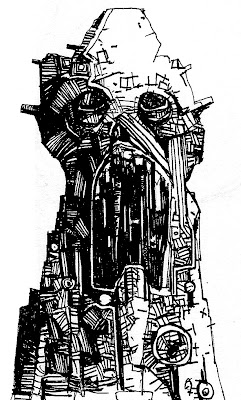 ...as for mechanics, it'll need something better than just "hey, maybe you got a disease". I'm thinking a curse where every time you kill something it comes back to life as a zombie and keeps trying to kill you and you can only stop it by destroying the huecuva.

I have always had a fondness for the Hook Horror because it is alignment Neutral. It ain't even evil! Just some spooky pulpy monster-- but sourcebooks for the Underdark or wherever exclusively pretend like it is. Hook Horrors are the Great White Sharks of spelunking-- misunderstood & majestic.

I like the Huecuva idea--that would be a nightmare for most PCs.

The Hook Horror is not thereby made awesome by adding a dozen little sub-hooks to its basic hooks. or spikes, or tats, or flanges, or anything else from anno 2001.

who is talking about adding sub-hooks or tats or flanges? what blog are you reading?

Shockingly WotC is giving up on making minis... I think we all know which mostly ignored monster is to blame.

I really like the concept of the Huecuva's curse. I'm going to run a game soon that is very necromancy heavy, and although it might take a lot of on-the-fly conversions from base creature to zombie, thematically this is excellent and worth it.
Because it is a curse, I would not allow any pc to aquire xp from killing the undead that reanimates to hunt them down. My very experienced group would enjoy exploiting a curse that could get them extra xp.

The hook horror is what the giant bird monsters should be.

I don't know, I quite like the Hook Horror.
That illustration is pretty awful, but I liked the idea of some weird thing with a face like a baby bird and whiskers, scrabbling around in the dark and clicking like Predator.
The hooks are kind of secondary.

When I first heard of the Hook Horror it sounded terrifying. I imagined some weird non-euclidean creature made entirely out of metallic hooks.

Then I saw the illustration.

Yours is much closer to the Hook Horror of my nightmares, Zak. Well done!

Your Hound of Ill Omen though, looks to me like a friendly Afghan Hound. Ahwwww!

I do like that monster though, due to the specific kind of ghost story on which it is based. It's clearly a puzzle monster/illusion rather than something you can fight. It's like the grim reaper; but a dog. Oh wait! Is that what you were going for?

All I can think of when I see your hound of ill omen is the ghost dog from the nightmare before christmas.

I love the Huecuva idea. I've always used them as Undead Clerics, giving them twisted versions of Clerical spells and a tendency to attack, despoil, and destroy religious structures (Churches, Monastaries, ect.). I also allow them to raise undead from the cemetaries near these structures. An additional curse would help raise them to the next level of evil.