The Flail Snail and the Flumph Are The Good News...

I am keeping on with the Fiend Folio makeovers.

The original firdrake is pure monsterbloat. A little red dragon for a game that has baby red dragons and fire lizards already. So making it any kind of lizard is off the table. And taking the "drake" part literally and making it a kind of kind of duck is better left to DMs gonzo-er than I. I figure "firedrake" is a decent Vancian name for a mysterious fiery entity. The spark crawled and spun, pooling and pulling shapes from itself until it wore the familiar grin and curled talon of a firedrake... 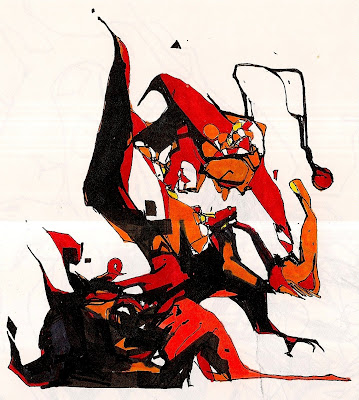 The only nice bit in the original firedrake entry is that the breath weapon is made of the lizard's own boiling blood. I'm going to say goblins use tame firedrakes to acidify and weaponize the blood of small animals. More on that later.

Firenewts are exactly like lizardmen but they breath fire. Which is really a great trick since it makes both lizardmen and dragons less unique and fun. This firenewt... 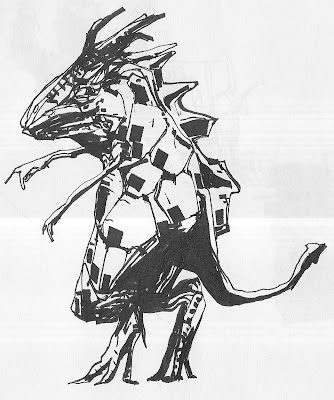 ...is about 4 inches tall and will demand strong drink or the answer to a riddle. Failure to provide one or the other will cause some small part of the interlocutor's body to burst into flame.

More blatant firebloat: firesnake and firetoad. For every scary thing in D&D there is a snake version of that thing and, on a 4-6, a toad version of that thing. There is little I can do with the word, concept, or picture of "firesnake" or "firetoad" to make them not just what they are. Here's my best shot... 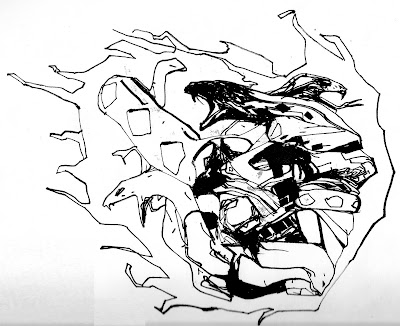 Here we have the firesnakeball, a weapons goblins make by feeding firedrakes to snakes. The flaming wad is then pitched forward at PCs in a coiling, burning wad which smacks some unlucky joe and then separates and crawls all over them just before the goblins themselves roll up and fight. Because goblins think arrows are boring. 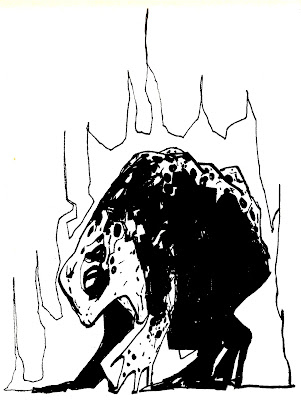 The firetoad is also a goblin thing but it's more a sneaky weapon like a caltrop. They're like the size of poison arrow frogs and you step on them and then that sucks because their blood burns you.

In majestic contrast to all this fire_____ bullshit, the flail snail is a perfect and unimprovable monster. 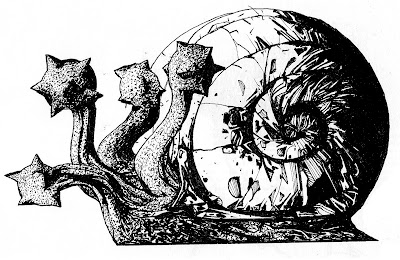 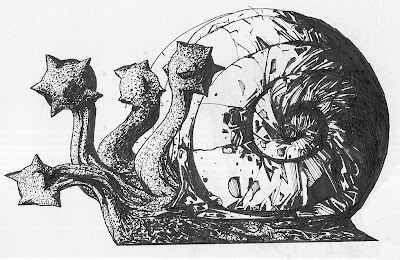 This makes me think about the whole your-best-art-is-the-art-that's-about-the-things-you-care-about-most axiom. Hey, maybe. Second thing: OTHERWORLD! I am still willing to trade belladonna's home phone number for a flail snail mini. Get in touch, ok?

So anyway fuck the Flind. Way ahead of even "booka" and "bunyip" in competition for most malphonic word in the folio. Sounds like you're vomiting with a lisp. Flind. And so bloaty: a gnoll, only a little bigger and with a chainy weapon that would reappear in Oriental Adventures. So, the makeover: they are guignolls and they are alchemically-fucked up gnoll berserkers with prosthetic body parts. Exhibit A here has a chain with a guy's head on the end instead of an arm but each guignoll is unique. The rest of the gnolls treat these guys as sacred gladiators. 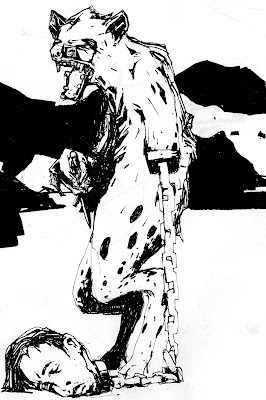 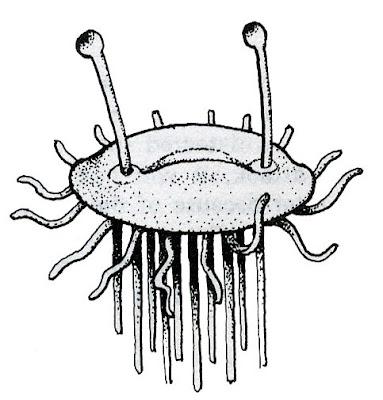 ...but whatever, stupid beats boring any day, the raw material here is nowhere near as hopeless as the flind or the firesnake. Just turn it sideways... 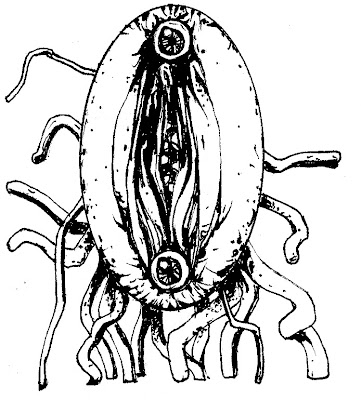 The Forlarren is unusual in being a tragic monster with a fairly compelling behavioral schtick: it longs to kill the PC and then feels just terrible about it once it succeeds. It has a kind of generic (but stylishly realized) Russ Nicholson bad-Puck picture, which can be fixed up by taking the redundant satyr-derived design elements out of it... 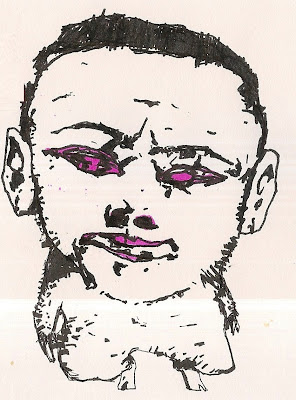 ..and it has the rather unfairytalish power to heat metal up. Lets just say it'll make water boil. Including any water the PCs may be carrying. Or a whole lake, maybe.

At the end of "F" we got the frost man. Which is an eyepatchy kind of guy who can shoot a cone of frost from said patched void and who, in common with most cave-dwelling species, has extraordinarily poor taste in clothing. Anyway, I believe a writer far better than whoever invented the frost man (this guy?) could probably write a creepy short story where an entire race of men who all have eyepatches (but why do they...oh never mind...) and who shoot cones of frost from these desolate sockets and do creepy icy things or at least do a few things that don't just remind you of pirates and frosty cones and a million other things you'd rather think about than dumb eyepatch cavemen. I am not, tonight, that man. Today I am the man that drew a picture while trying to draw something else entirely of this guy... 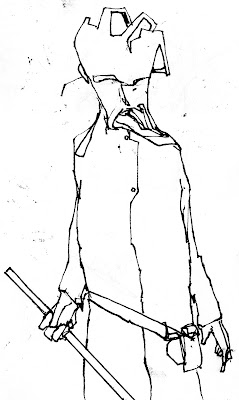 ...who I imagine is blue-skinned with white facial hair and who is 9 feet tall and who has a freezy touch and who stands waist-deep in arctic pools, demanding weird tolls from lone travellers.

That flail snail is astounding.

Oh you have got to be kidding me.

I will not! Be-tentacled fiend, NO I SAY.

That is a very nice Flail Snail indeed.

Zak: a flail snail to be proud of. The monster has always raised a question in my mind: can one get all the monsters one needs from The Electric Company?

I liked "Flind Bar" because it was...I don't know, a unique way of introducing nunchucks into DnD without going to another campaign setting. Like a lot of monster bloat, I actually LIKE the DnD 4e solution-- make the "Flind" a Gnoll job or a culture of Gnolls, & give me interesting stats & I'm good to go.

Orths are the larval forms of Gugs. I read it in Freud's The Interpretation of Dream-Quests.

I love your all 1's firedrake so much I want to marry it. Or, at least include it in my game.

In other news, The Boy saw your picture of the Flail Snail and said 'I sure don't want to meet THAT. Wait a minute . . . how big is it?'

I agree, the firedrake is a genius idea.

I've always had a soft spot for the flumph. It does next to nothing, yet can quickly make the pc's suspicious-- and even scared--of It, as chances are they've never seen one before. And although it look like's a bit of fecal matter from Yog-Sototh's intestinal track, not only is it not related to the elder gods but it's lawful good too. Some of the best monsters aren't necessarily the ones that want to kill you.

Alternatively, keep the Flind Bar, but make it the name of a tavern.

Here in the UK in the 80s, 'flind' was a highly offensive term for someone with physical and mental disabilities. I don't think I'll be using them.

All the fire creatures seem to be an attempt at a 'fire ecology'. We are told such a thing exists n the elemental plane of fire , but yeah they could at east be a bit different in the way they affect the party. but then elemental planes are of course, boring.

Stuart at Robertson Games nailed (!) the flumph for me in this post: http://robertsongames.com/rpg/not-bad-monsters

This monster is boring.... lets light it on fire!

Wasn't the term 'flid', not 'flind'? I always thought it was a contraction of thalidomide.

Just wanted to throw out a congrats on the good Vornheim review from Grognardia!

Thinking about it, it seems true!

I bet the Forlarren can make water inside them boil...

Amy; right. Flind was a local corruption of flid I think. Either way that's what the monster sounds like to me.

Hmm is there a Grand Guignoll?

Yeah, he puts you in a guignollotine.

I believe that creative people have a certain amount of creativity that they can tap before they become Sir Paul McCartney (or John Lennon by the time he died, before anyone says anything).

In that light I beseech you to leave off this task, let the accursed FF lie in piece and do something else with your supply.

Your belief is inaccurate. Much like your belief that tattoos are:

You are free to fill the entire rest of the internet with conservative commentary and fact abuse, but I won't host it here.

I must also concur with the love for the flail snail. Nice execution!

Absolutely LOVE your monster roundups!
I'm wondering if you'd planned this article before or after the Reddit challenge?

Finally gotten around to adding some content to my blog and discovered the Reddit/r/RPG section by chance shortly after :D

Anyway keep up the good work, and thanks for the Flail Snail, tis awesome!

(oh, not that anyone cares but the address is www.dungeonsNdragons.com)

no idea what you're talking about

Oh :D The challenge a few weeks ago at Reddit/r/rpg was making flumphs usable, saw your blog given an honourable mention on there :D (just spent ages looking for the link but I can 't find it now)