New, Improved Monsters from the Fiend Folio That Start With E

I still hold the opinion that the Fiend Folio must be slain such that it may be reborn in mine own image or whatever. So: to it...

A little more elegant than "Princes of Elemental Evil" but it still sounds half-literate. Anyway, no need for all this Gygaxian symmetry (there's five of them anyway) we just need to remember:
-there's some big monsters
-they're Princes
-they have elementy-powers
-they're Evil
In true Deities and Demigods fashion, the implication is mostly that what these august entities do is wait at the end of dungeons to shoot you with rays and punch you, and that idea needs lots of help, but you are wily and wise and a Prince of Fire is totally work-withable, so I'm just going to work on how they look here.

Cryonax. (The Cold one.)I like the name...he is a 15' tall tentacled yeti which sounds pretty great except it just sort of makes him a Demogorgon wannabe so instead he is this icy fellow with a polar worm on his icy shoulder...(click upon him and his fellows to enlarge them) 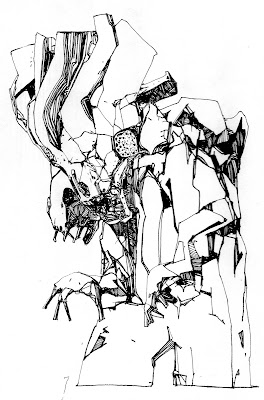 Imix. (The Fire one.) The Prince of Burning Things appears as an 18' pillar of fire whichOhmygod, hold on...ugh...sorry, I was almost bored to death there. Whew. Anyway, yeah, right, pillars of fire are only interesting in the Bible. So I decided he's curly pointy screamy salamandery guy on top of a volcano. 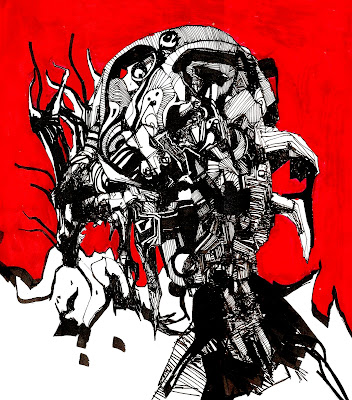 Ogremoch. (The Earth one.) Anything beats looking like sad dough. Let's say he's like a big mountain monster. 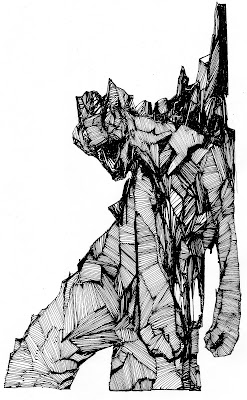 Olhydra (the Water one) and Yan-C-Bin (the Air one) look like blobs of their respective elements and have names that look like what's left on the floor after pasting together a ransom note. I hereby dub this 40' tall rotting fish and extraneous-eyed bird Alladra and Ancibin and declare them superior... 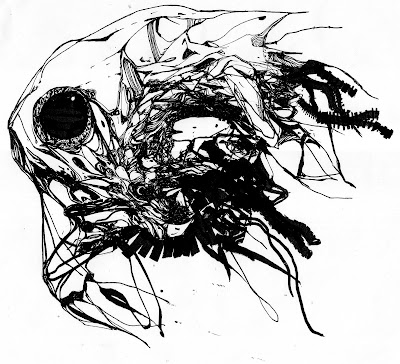 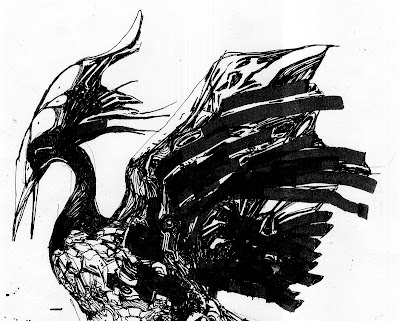 If all your players are girls who have at one point or another been paid to take off their clothes while "Closer" is playing you pretty much have to have them in the game and you have no choice so no use worrying about it. Word. (Which is "Drow" backwards.)

Enveloper
Truth in advertising here in the Fiend Folio (at lest until we get to Eye Killer). Basically it's like Rogue from X-Men only instead of being hot and trashy and streaky it got designed during the same sleep-dep-and-Pilsbury binge that produced Ogremoch. I have changed him from one blobby sad fat foe into smaller organisms that crawl and corrupt and join up like mad plasm. It combines blobbing over your weapon-hands with a choke attack. It's one of those your-friends-should-probably-notice-what's-going-on-halfway-through-and-help-you-out monsters, so horror and painful slowness are important elements here. 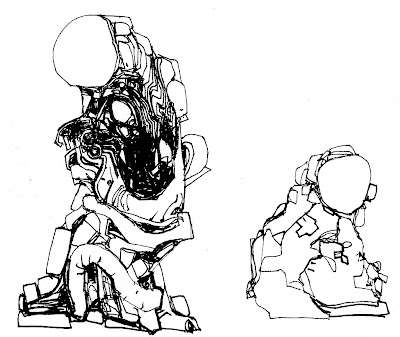 Ettercap
More proof that the Fiend Folio authors were sucking down the Jim Shooter-era Marvel Comics, the ettercap is Spider-Man, only as a dumb generic goblinoid. Kinda pointless in a game that already has nine hundred types of giant spiders and is going to have driders in a few years. As Steve Ditko could've told them, there is no point in combining people parts with spider parts unless you can make the result look totally fucked... 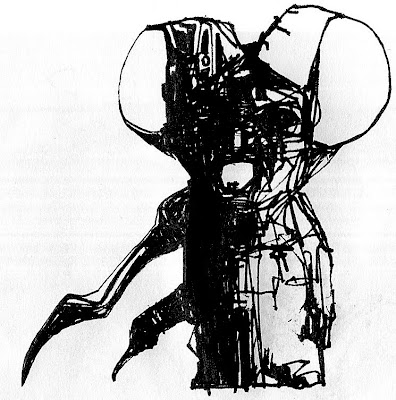 ...an ettercap is what happens when the giant spider manages to lay eggs in a halfling's brain. The web comes out of its mouth.

Eye Killer
It neither is a killer eye nor does it kill eyes. But then that's Native American names for you--Joey Running Deer isn't a deer nor does he run with deer. I don't think. Is it a Native American monster? I think I read that somewhere (maybe in the Marvel Comics where they had recently appeared when the Fiend Folio was published...).

Anyway the original Folio killer is a batsnake in a game that needs neither more bats nor more snakes. This one is a worm with bat wings and a claw around its mouth that it uses to pull your eyes out. Yes, the game needs more claws, worms, and deoculization. 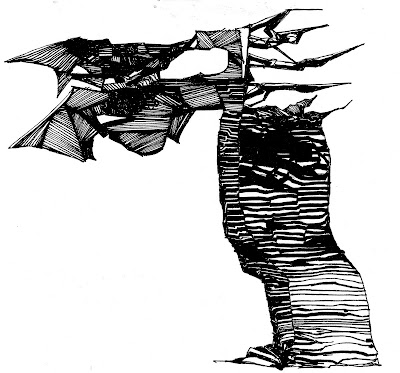 Eye of Fear and Flame
"The nature of the deeds will vary but they will be uniformly evil". I will not attempt to fix that which is not broke. 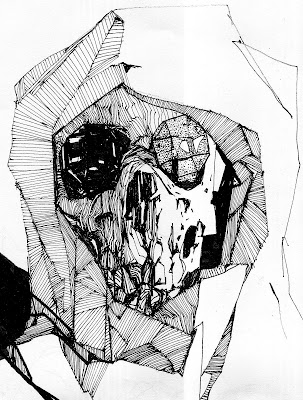 I love how your art looks both doodled and extremely detailed at the same time. How much time do you spend on these in general?

The Eye of Fear and Flame, the name alone is worthy of being used as a Dio song. Might be my favorite one out of the Fiend Folio.

This is a great project. I am really loving it.

Just as an aside, what you are doing, I routinely try to do with every monster and race in every game I run.

Starting new campaigns is a lot of work. I have already stole from you to make my job easier.

(Cannites, rebranded gnolls, ride hyenadons and eat human corpses in worship of the two faces of Ioz, the Toadgod, Anubi-oz plague and Hori-oz chaos. They are accompanied by your rebranded devil dogs - "Black temple dogs" who usually walk upright and like vodka.)

As an aside, having nothing to do with the quality of this project: when do we get more "I hit it with my axe"

I played an Ettercap wizard for a while; she was pretty darling, right up until the retreating enemies grudgekilled her-- she was knocked out & they used a "always hit" magic missile from across the mat to drop her to dead. Sad.

On a list of my top 10 favorite D&D monsters:

4) The Eye of Fear and Flame: The name alone defeats you. Surrender or I'll repeat it.

The Eyekiller is a servant of the Lovecraftian Harvester of Eyes, who is said to speak into the dreams of the blind and blinded and guide them to acts that exult and further his agenda.

The Eyekillers "killed the boyfriend of one of Wong's friends" apparently. Doctor Strange must have been really bored the day he went after them!

For some reason I read it as the Elemental Princess of Evil and thought that was much cooler.

The idea of Cryonax having a polar worm living inside him is just excellent. Especially if no one knows that. You'd be fighting some crazy giant ice guy when all of a sudden a new enemy busts out and the threat doubles.

Gregor--How about Emmental Princess of Evil?

You're definatly right about the ettercaps, I always thought they might have some potntial to be a scary monsters, but they seem to have been relegated to the sidelines almost immediatly.
... added to which, a stupid half spider half man is actually ALOT less scary than an intelligent spider!

dungeonmaster; it's for precisely that reason that I find ettercaps scarier than driders.

Ettercaps make excellent sapient spiders - they're only barely humanoid and don't need to be even that. The also have a really creepy name.

Driders have a dumb name and a dumb idea (spider centaur? really?) and they take away the scariest thing about spiders after their legs.

Really, ettercaps just need to be a bit more dangerous.

Eh. Driders are these horrible, bloated, warped, constantly in pain things that want to turn you into one of them. Plus they have poison on their weapons, if that was what you were referring to. Nasty poison. Save or die but if you die you wake up as one of them, and if you save you still get knocked out and are at half HP, and it's three days before you can walk. Also, they hunt in massive swarms and run around on the ceilings.

Hmm not bad, but still seems like trying too hard to me. Part of the whole drow wangst thing.

I was referring more to the spider's whole face rather than the venom. Few other creatures on earth have a face like that. Even most insects make do with just two (compound) eyes.

Zak, I have really enjoyed a lot of the art that you have posted in the last six months. You work has an early 80's 2000 AD feel. You are like the diabolic offspring of John Blanche and Ian Miller and Pat Mills was the midwife.

Really enjoying this series of posts! Thanks Zak

i like the sort of kente cloth thing going on with the drow. If that look caught on, it would become even weirder and wronger than it already is to see white people dress up as them at cons.