The Unimaginable Star of Yragnnngrelfffzzzikkrraxxllarrrgghh 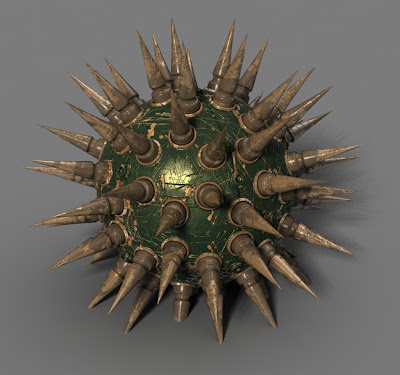 This name is an approximation--the mind of anyone attempting to speak the true name of this extradimensional artifact is immediately seized by the object's "entropic field". This anomaly is just one of the chaotic effects generated by the bizarre and enigmatic sphere.

The object resembles the head of a morning star*, however, while it is both visible and describable, it is unimaginable. No being can picture it clearly in his, her, or its mind. For this reason, if the orb is used as a weapon (it has the range of a sling and inflicts damage as a morning star), the attacker is at +2 "to hit". However, this also makes retrieving the sphere after it is thrown (or after the possessor is separated from it for any other reason) unusually difficult--the task requires a successful wisdom check at -2.

The sphere is said to affect the waves of probability in many ways--few of which are concrete and detectable--however, the Star clearly confers the following powers/effects on the possessor:

*It is claimed that, when in the Eastern hemisphere, the Star appears as a shuriken with eight arrow-like points--these reports are unconfirmed and perhaps unconfirmable.

image totally not made or owned by me

That's awesome. It inspired me to make an artifact from an idea I had floating around. Thanks!