But if I'm gonna do this, I think I should inject some DIY D&D philosophy into it.

Basically the thing is, your NPCs suck and they are all going to die. This is not one of those mostly-not-DIY-D&D blogs you occasionally wander onto where everyone spends half their entries explaining how NPCs have to have motivations and depth and everybody trades character-design tips they got from reading Jane Austen and/or watching Buffy.

This is how NPCs work in games I like to play:

An NPC shows up with one dimension. This dimension is awesome and generally involves tenting his or her beringed fingers and laughing maniacally about cruel deathtraps s/he dropped the players into. The NPC probably gets fed to a pit full of Yeth hounds or is ignored in favor of the players doing some crazy shit they thought up while trying to fish a nacho out from under the couch.*

If, by some miracle, neither of those things happen, the NPC might show up again the next session with two dimensions. He seemed like a kindly barkeep but he was a wereweasel all along? Huh. Wait, you're Luke's father? Whoa. At any rate, he is probably going to get impaled on something before breakfast the next morning, or, again, ignored in favor of some plot thread s/he isn't involved in so whatever.

If the NPC manages to come back again then the NPC will now have acquired a third dimension. Because this keeps the players from being all "Fuck, Gorgraxx The Unliving again?" Like in Jedi, we find out Vader, in the end, was more loyal to Luke than the Emperor. Huh, who knew?
____

So, here's how I'd write up an Artifacty NPC: 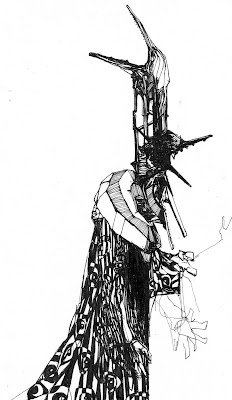 Vosculous Eeeben is the current Duke Regent of Vornheim. Like most who have donned the Three Beaked Mask of the Regent, he is a vain compromiser, given to fits of solitary drinking. His only joy is gambling on duels between immature carrion crawlers in the grub-breeding pits.

Like most nobles of his line, his mother began exposing him to small doses of poison at as a child so that, by the age of 13, he'd built up an immunity to most common toxins.

If Eeben appears in a second session, he will be revealed to possess the following characteristics:

One item from the DMG "miscellaneous magic" table.

One trait from the "Hidden Traits of NPC You Didn't Realize Was Going To Be Important Until You Started Playing" table.

If Eeben appears in a third session, he will be revealed to possess the following characteristics:

Roll or pick something from the Traumatic Adolescent Background Generator.

If Eeben appears in a fourth session, he will be revealed to possess the following characteristics:

Roll or pick something from the Traumatic Childhood Background Generator.

The more I think about it, the more I feel this is the way to go if you're going to have "shared" NPCs. What the NPCs appear to be at first is something everyone can start with--what the NPC actually is is a DM's decision. Everybody needs an avuncular innkeeper--what that avuncular innkeeper turns out to be underneath (if anything) is a place where DM's differ. And these differences are interesting.

This is, pretty much, how DMs deal with many things in D&D--monsters, f'rinstance--already.

*Just because the PCs are ignoring an NPC doesn't mean his or her scheme won't happen, obviously--but the NPC's personality and quirks only matter if the PCs pay close attention to him while he's enacting it.

Actually, I think this is better than what I was thinking, it's more like Just-In-Time NPC Detail, than my: Ming has two flaws and and one quirk. Thanks.

I have no experience with this. My NPCs are and have always been as detailed as the PCs if their place in the story warrants it.

A mook is a mook but the guy who owns the local inn has a wife, two daughters, makes a mean onion soup because he always felt people will comeback to a place that serves good food. My players would often stop to talk to various shopkeeps and merchants they dealt with to get the best prices, make special orders and see if their Aunt Audrey's gout had cleared up. It's been like that since my first game of D&D in 77'.

we all choose to put our energy in different places.

having met your group briefly, I can tell that whatever you're doing works

Numerous thumbs up for this.

I like the "roll for this second time NPC appears, and this on the third appearance" idea, but I kind of think what to roll for should be the same for broad NPC types. Extras -- guys who just supply something necessary -- should have sparse personality details on first appearance, a general background if they appear more than once, and maybe a 1 in 6 chance every couple months that something interesting will happen to them if they're regulars. Other NPCs would get the extra general background, and what you roll on 2nd and 3rd appearance depends on whether the NPC is magical, a villain, an ally, a love interest...

I've been inspired by this post to test some ideas about random personality and background generation. Some example NPCs during the development: Orliss the Bright, Dumas the failed scholar, and Shigmeer the Filthy.