We Will Ride On a Road Of Bones

For our upcoming mutant game, Mandy's going to be a mutant red panda (and, in a fine example of ruleset-abetted adorableness, she has only Speech-Partial, the idea being she can talk like Pikachu), Connie's being a zebrawoman (totally mute, she has Mathematics-Advanced, however, which probably makes for rather complex combinations of foot-stomps, luckily she also has Dance) and KK is going to be a cyborg chihuahua with a chainsaw-blade for a mohawk.

In addition, on game day we may have as many as 7 more people showing up and god knows who'll be what.

The first choice the group has to make is what their ride'll be. Here're the options for post-apocalyptic wheels, courtesy of lunchtime Google image search:

A. This is the kinda thing Eastern European hardcore bands tour in... 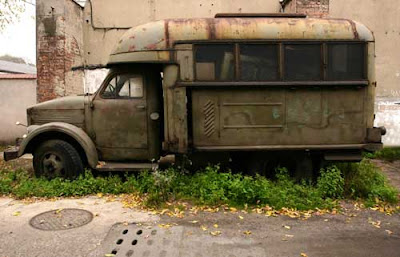 B. The classic cars infesting Malta are one of the more charming consequences of British imperialism... 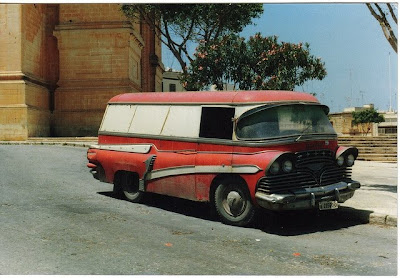 D. I considered having a Jokermobile as an option, but I feel like that's the kinda badass you gotta get out there and earn. As a consolation, this bus does have some kinda hellish fully-automatic mounted on it and a pokey grill for impaling your distant ancestors as they bound gracefully across your ungrateful mutant path... 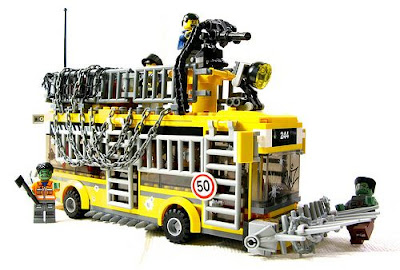 E. Racially sensitive mutant animals might prefer to travel in a vehicle that is, itself, a mutant: 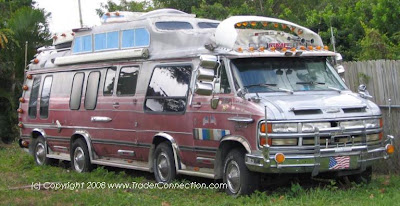 F. Budget option. I wonder what the base vehicle under this mutt was, exactly? Is it more one thing than another? It looks like at least 2 parts of it are from a crane.

Addendum: since I posted this in the dead of night, the first comments were from across the pond. UK gamers have informed me: A) This is called a "Routemaster" (what we in the colonies call "those Paddington-Bear-looking red doubledecker things that come in every Matchbox set") and B) It's supposed to look like this. The mysteries of British automotive engineering know no bounds. 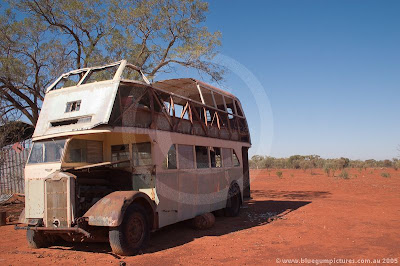 Each vehicle has distinctive advantages and disadvantages, some of which are obvious, and some of which can be discovered by a clever mutant with a successful automotive mechanics roll.

Which would your players pick?

Definitely the Jokermobile, which certainly needs to be earned... or, for starts, the Lego bus thingie (D).Just because of all the obviously cool gadgets...

E was, I'm fairly sure, a London bus.

I think I may have asked this before, but are any of these side-games going to make it onto the TV show, or are they exclusives for us regular readers?

@kelvin
as yet we have no plans to film anything but the one campaign.

F looks like a heavily modified Routemaster Bus. They were common in London until recently, when they were removed on health and safety grounds (people falling off the open rear).

If I was giving my player a vehicle, it would be A or F for the sheer robustness of the engineering. Maybe let them add a few bits a la D though.

F. Budget option. I wonder what the base vehicle under this mutt was, exactly?

Mutt?!?! The Routemaster is a classic of mass transportation engineering; it lasted about 50 years as a working vehicle. That asymmetric nose was a deliberate decision by the designers; an ingenious way to maximise the driver's field of vision. (blah, blah, blah)

I've always had a thing for refurbished ambulances. I don't know why.

& in my last TMNT game a new player made "Math Lion"-- Hands none, Biped none, Looks none, Speech partial, full size level & claws...& all the math skills. Pretty hilarious; I see you've struck more or less on the same vibe.

If you are looking for some cool Mad Max styled stuff (vehicles, weapons, NPCs, and such), you can check out the The Nomad Market at Datafortress 2020. It is loaded with pictures of all sorts, and you'll find no shortage of post-apocalyptic vehicles!

My players would almost certainly go for D. Not because they are necessarily the "charge in and skullfuck the enemy at every opportunity" types, but they like that have that option open to them should the need arise. ;-)

F. F is the bus. Why did I say E? Who knows. Anyway, those things turn up in the strangest places. This one's out in the Australian outback somewhere, and I spotted one rusting away in the woods in northern Minnesota once.

There was one in one of the Doctor Who specials last year, too.

Furthermore, I am reading White Dwarf #59, and in it are rules for the Routemaster in Steve Jackson's Car Wars.

I know you aren't going to film it, but is there any chance of Actual Play mp3s of it?

My 13 year old self had a mutant porcupine whose Road Hogs modified van had one of those camper tops that was on pivots, so you could throw open the "sun roof," pop it down, & spray people with the heavy machine gun mount.

It was basically the A-Team van otherwise, though.

Most of my groups would have probably take A. They'd like the mods the lego bus has, but most of my groups when applicable usually have a one or more tinkering character types and they like to do all the customizations themselves. A. Looks like the best option to start making and armored and spikey engine of death.

The Players? E. Because it looks like a party van/limo. And they prefer to travel in style these days and save ass-kicking for up close and personal.

Me? I'd take C. And kit it out as a combat womb for my hyper-intelligent double regular size mutant rat technopath. Then remember the mantra "Do not leave the Womb. The Womb is life."

And don't forget the central asian tradition of decorating trucks with shrines, etc.

Next to the domestic canine which I do love dearly, the Red Panda is the cutest and most awesome animal on Earth. I remember the first time I saw one and thought it was fake. Like, animatronic or something.

Red Pandas have since become:

A species of peaceful sentients hidden in a valley of the China of my D&D world, a single Chinese superhero in my M&M universe, the subject of an award winning art piece I did to benefit the World Wildlife Foundation and the basis for an alien species in one of my Traveller games.

Kudos to Mandy for understanding their innate greatness.

What, no "Damnation Alley" Landmaster?

Although yeah, that should have to be earned too.

zak, was looking through my g-reader when i read this. thought it was planet agol, before i noticed it was not. about the best compliment i can give to a gonzo sci-fi premise.