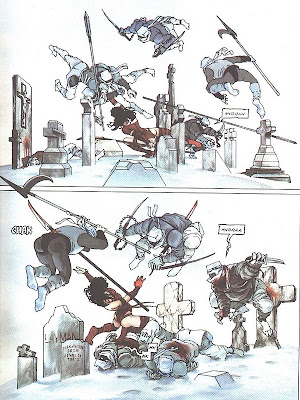 (I'll be using this in TMNT and any Oriental Adventures games I might run.)

A PC can learn this technique for a cost of 1/2 the x.p. necessary to reach the next level, though s/he might have to seek out a master.

After a successful unarmed to-hit roll, the player begins to speak and the GM starts a stopwatch. The player must then continuously describe, in detail, a series of physical movements his or her character is using to attack his or her enemy, without stopping.

(Example: "I leap into the air, twist, land on top of the guy's head, reach down, shove my fingers into his eyesockets, pluck out one eye, throw it into the air, slice it in half with my dagger, catch the pieces in my mouth, spit them into his face, jump off his head, sweep his legs out from under him, catch him by the hair, throw him through the window, jump through after him, punch him in the neck four times before he hits the ground"...etc.)


If the player pauses for more than one second ("one Miss-iss-ipp-i") the recitation must stop and the GM stops the stopwatch. The longer the player speaks, the more dangerous the attack. The attack causes damage equal to one half the number of seconds the description goes on.

The described attack does indeed occur--though it can only include actions which the PC (or, at least, a Jet Li-like version of the character) could physically perform--i.e. if the PC can't eat metal then the description cannot include the PC eating the target's sword. If the description suggests some result in addition to direct physical damage from the assault (i.e. if the strike involves the target being disarmed or thrown into a spike-filled pit), the target may be allowed a reflex save or the like.

Although the described attack can include any number of actions involving weapons, they do no additional damage and the initial to-hit roll is made as if it were an unarmed strike. If more than one target is included in the description the PC can decide how exactly to allocate the damage generated.

An attack description can last up to a number of seconds equal to 30 + the PC's level OR 2 times the maximum amount* of physical damage that PC is ordinarily capable of doing in melee combat--whichever is higher. (*This maximum will take into account damage done by weapons, though if a particular weapon increases the maximum, that weapon must be included at some point in the action description.)

The technique is usable once per day.

Maybe more of these later.

Great choice for an image. Some of Millers best work.

Just A Minute plus D&D. Genius.

The cap & the "once per day" was what I was waiting for; this seems ripe for abuse-- then again, what isn't?-- without some tough strictures, but that about does it. I tend to go by the "rule of cool" where-in if the PCs describe their awesome action in detail, I give them a bonus to it. This-- this is interesting. I like meta-rules, so I might say "once per session" rather than once per day, but that is just me.

One of the guys I game with on occasion has this strange ability. If he describes in detail what his character is doing, the dice LOVE him for it, and reward him with high numbers. If he says "I hit the monster." he gets the usual crap that we all get when we roll the d20. I don't have statistics to back me up, but it sure seems like it's the case.

That being said, another awesome idea from the awesome spigot you seem to have installed in your brain.

You appear to have got some Narrativism in your Game. ;)

I really like this, as not only is it clever and fun, but I'm fond of these type of meta-mechanics in general.

Niiice. It get's a little crunchy at the end there, but I'll let you, the DM, worry about that as I focus on describing how I choke this dude with his own entrails.