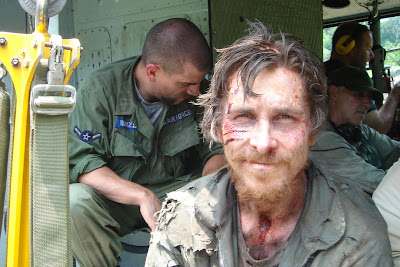 ....this is what Steve's guy mutters as he leans on the hood of his unloved truck's engine block and fires his .45 into the back of a doomed road pirate and then proceeds to roll double sixes and then 11 and then 3 more (with Savage World's style "exploding dice") for 26 points of damage.

(And the guy he shot was just barely dead. I got serious hack plans for the Palladium SDC system because average starting characters can get shot like 20 times and still not die. More on these later.)

Steve originally figured his character would be a kind of Harry-Dean-Stanton-in-Alien/Repo Man-mechanic-type but later decided that he was like a German heroin--addicted army vet and based his character off Deiter Dengler--the guy from that Werner Herzog movie Rescue Dawn.

His lone human character had a strange pathos, motoring across the post apocalyptic desert in the company of 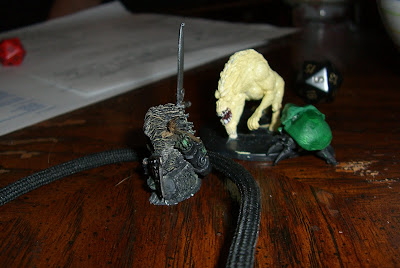 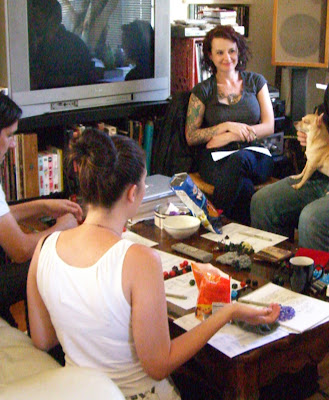 So, he was long-suffering, this lonely German:

First there was a big controversy over about which vehicle to pick...quick Mechanical: Auto checks confirmed that the red truck was the fastest and the army truck had armored sides and bulletproof windows. The animals liked that--and the Lego bus was also popular since it had, y'know, a gun on it, but Steve was all about the 4 axle GM van, on grounds of both style and reliability (it was obviously the newest). I also said it had a sauna. Because the actual real truck in the picture had a sauna. 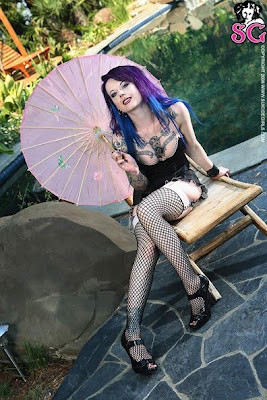 ....and Darren and Mandy and Kimberly outvoted him and they went with the bulletproof army dealy.

Steve got a little sulky. For reals. "I don't wanna drive this fucking thing".

Minutes later, after a carnivorous, hopping reptiline had landed on it, he even went so far as to complain that the windshield was bulletproof--since it stopped him from shooting through it.

Their assignment is to review restaurants--Zenobia works for Gourmet magazine reviewing the eateries of the wasteland--a job requiring bodyguards, ninja skills, and frequent medical attention.

The adventure began with an attack from the aforementioned road pirates. They drove up from behind... 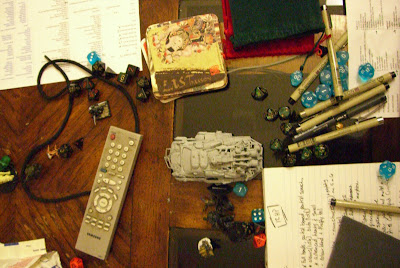 (pirate car played by a toy car I made a while back outta model airplane parts, party's army van played by the remote control)

Nixon climbed up on the roof and tried to katana chop the wirepoon line stretched from vehicle to vehicle (played by a shoelace). Steve dealt with the pirate's pet cat-lizard... 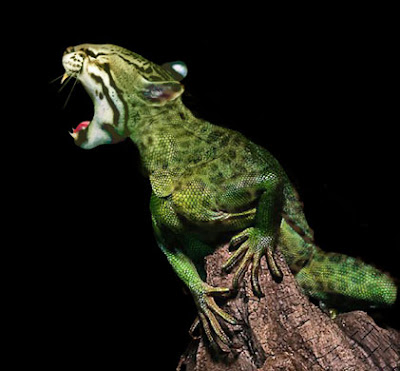 Chainsaw Chihuahua used her automotive basic and automotive mechanics-body to divine that the road pirates vehicle had a weak spot near the engine block on the hood, Mandy shot at it, and Darren's turtle played stirring music on the MOOG he'd rolled for random equipment.

There were a lot of handling rolls to do when Mandy rolled a 19 and hit something important inside the bad guy's car--thus immediately turning it into 5,000 lbs of dead weight (and that catlizard was still on the windshield, despite hopes that the wiper fluid would scare it off) but the weltschmerz-ridden driver kept the crate on the road. Chainsaw Chihuahua mananged to gnaw apart the last bits of the frayed cord, sending the attackers sprawling into the clutches of some very poor rolls to keep their car right side up and themselves in it, respectively. 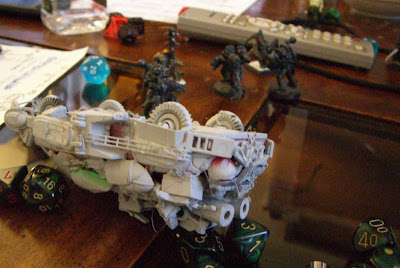 After a lot of shooting, martial arts, and math, all the black hats go down and our heroes loot the car for treasure.

In with the gasoline (not diesel, unfortunately) and ammo (I'm having everybody count bullets) there's a notebook.

It's full of notes on three local restaurants--the road pirates were working for Bon Appetit magazine.

The notes say: Homesick Diner is on the far side of the Genesis Pits, Bon Appetit didn't get to review Sikorsky's spinning rooftop restaurant since it's surrounded by a gang war, and the Red Palace apparently has fortune cookies that are always right.

So which restaurant would your players review first?

When did you eat Jeff Rients' brain and absorb all his knowledge?

Brilliant stuff once again. If only my games were this fun.

Oh Red Palace for sure. Also, of course the Red Wun goes fastest.

Being a lover of food and a decent home cook, I love the idea of reviewing restaurants in the wasteland. Zenobia has such a great job!

Oh, I'd go to the spinning one, but my players would likely go to the Red Palace.

Red Palace. If I'm going to eat somewhere as dicey as a restaurant in the wastelands, I'm gonna want the food smothered in Sweet n' Sour Sauce.

Please tell me you have a "random table of always-right fortune cookie messages" somewhere...

Red Palace and the spinning restaurant sound the most adventure hooky, but I have a HUGE weak spot for diner food and the Homesick Diner is a fantastic name for a post-apocalyptic restaurant, since I assume everyone is a little homesick in one way or another.

I like the tone of this thing. It always kind of irks me that the default tech level in Mutant Future/Gamma World stuff is medieval, because when I think post-apocalyptic, I think of broken down trucks, sailboats made out of tugboats and reliable pistols and rifles.

THe Red Palace. Absolutely. Who can resist fortune cookies that are always right? Of course, you know that you won't like what you read ...

The only way my players wouldn't beeline for the Red Palace is if I named one of the diners on the list: "Don't Go Here"

Red Palace, of course, and then you'd know which one to go to second.

Hot damn! The restaurant reviews of the Apocalypse! AWESOME!

AND has made we want to run a Gamma World kampaign. ;)