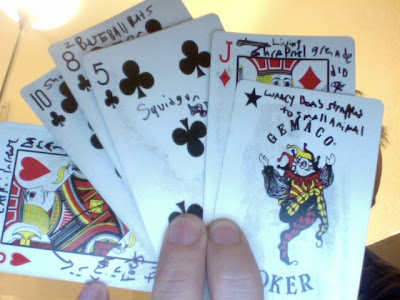 When throwing together random post-apocalyptic villains for our TMNT game, I find that deciding what weapons they're carrying is a subtler task than in the D&D campaign.

In D&D, the weapons tend to be either standard issue (bow, sword, axe) or culturally-specific (the goblins throw vials of slime at people, that's just one of their things), and anything more unusual than that is probably magic, so it's treasure and therefore rare.

In the post-apocalyptic setting, the "everything is scavenged" vibe and the resulting lack of unifying "cultures" plus the wildly varying tech levels plus the whole survivalistic angle plus the fact that novel weapons are not necessarily more powerful than standard-issue ones (i.e. they're not necessarily magic) plus the fact that a big draw of the Ninja Turtle game is the novelty and complexity of the fight scenes all suggest that the precise kind of weapons used plays a much bigger role in defining the mood than it does in good old Vornheim which, after all, is supposed to look and act enough like Medieval Europe often enough that the players are at least a little surprised when things get weird.

Point being: it is helpful to think up a wild and various list of possible weapons the baddies could be carrying in a radioactive future in the event that the PCs run into unexpected trouble or in the event that I get lazy about building specific badguys before I run a session.

Rather than write these on a chart, I decided it'd be fractionally easier to get a sharpie and write the weapons and their vital stats on a set of playing cards. (I know I'm not the only one, lots of game companies produce card products with treasures or traps or whatall on them--and of course there's Sham's W/O Walls dungeon-building technique. It's easier to look at a one thing on a card than find something in the middle of a chart.)

I used the cards themselves to suggest what weapons would go on them: clubs are blunt weapons, diamonds are edged weapons, spades are projectiles and firearms, and hearts were various unarmed strikes and techniques. The value of the card roughly corresponds to the power level of the weapon--with court cards being exceptionally bizarre or powerful. Jokers are wacky weapons.

Now if the party tries to rob d6 mutant bikers for their gasoline, I can shuffle, deal, and in that moment where everyone tries to read my handwriting it's just like that moment where you go "He's reaching for something! What is it? A knife? A gun? A limpet mine made from a real limpet? A speedboat propeller attached to a frisbee?"

I kinda like the idea of using playing-card vandalism to handle anything in any game that:

--doesn't take too long to think up,

--you want to be different every time, and...

The Yog-Sothoth.com people have an insanity deck for Cthulhu--seems like the kind of thing that makes sense to be in a deck. NPC personalities could be a good one to do next. Clubs are cliquish, diamonds are powerful, spades are dangerous, hearts are friendly...something like that.

There was a playing card/NPC personality system in Traveller: The New Era. It was okay, but like many, many things with that game, it was as boring as a grey day in Milton Keynes. It might serve as a useful basis for a more interesting system though.

Clubs were indicative of a violent personality, diamonds of greed, spades of ambition, and hearts of sociability, with face cards being special instances of the parent personality type.

"the goblins throw vials of slime at people, that's just one of their things"

Yeah, cards are cool. They're something everyone understands and the fact that you can draw hands of cards that interact with each other means simple tools give complex results.

And npc with a five card hand for personality traits would be a complex person. Maybe he has a sliver of aggression, but tempered by sympathy, etc.

As for what the suits stand for, if you could have some sort of relationship between club-spade and diamond-heart you could tap knowledge most of us have: flushes are more powerful than random cards. Maybe clubs are aggression and spades are ambition as kelvingreen mentioned. Then an npc with all black cards would be especially bad news and players would understand that at a glance.

If they could see them . . . you might keep a hole card hidden that would take some digging by pcs to find out about.

If you wanted to get fancy, pc interactions with npcs could involve manipulating cards somehow: trading them, removing them. But then that start looking less and less like D&D.

Anyway, cool stuff thanks for sharing.

The use of the suits as a categorical is what brings it up & over the top; that is just sly & elegant.