Frankie vs. The Wyvern of The Well

And, yes, Merriam Webster says it's WHY-vurn. OED--mystifyingly--renders the first syllable as "wei" but the e is a schwa, which is an "uh" sound. No idea, really. I pronounce like I imagine Beowulf did, based on the way he would've spelled it.

Also, here's my quickstart character sheet for my upcoming ten-player Teenage Mutant Ninja Turtle/Mutant Future game--it ain't pretty but it gets everything you need on there.

Seems like a nice middle ground between spending forever on character generation on day one and making everybody play pregens. 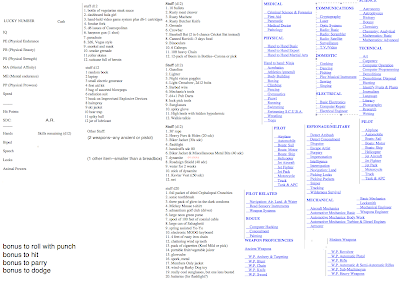 Skills have been simplified to resemble the system we use for D&D so you just tick the ones you have and starting equipment has been pared down to: 2 weapons--any ancient weapon and/or a pistol--plus any one other modern item smaller than a breadbox plus roll on the charts on the character sheet (about half the items upon which were stolen from Jeff).

Email ThisBlogThis!Share to TwitterShare to FacebookShare to Pinterest
Labels: design, DnD, I Hit It With My Axe, rules, TMNT/Mutant Future

I'm just looking forward to someone crashing this together with your homebrew DnD-- heck, the penalties & bonuses aren't that far apart, right? I mean-- if you wanted to lift the Mutation rules, all you'd need to do is tack that on to the back of a DnD sheet.

@mordicai--
yeah,
pretty much the only real difference is the hit point scale and the less abstract combat (decide to dodge vs. auto-dodge, etc.). Palladium characters are built a little tougher. The rest is pretty much translatable

The TMNT RPG is great we always had a fun playing when my buddy Chris ran it. Character generation can take forever.

After all that debate on what to ask the Wyvern, I can't wait until the ladies get something like a ring of 1 wish, which they all have to agree on as a group, and word extremely carefully, like all old school wishes. The debate and wording of said wish would take up like 7 episodes. :)

It's always RPG comedy gold when party members encounter something they have to act seriously in front of or else suffer game penalties. Especially when the thing is potentially helpful and way out of their league it seems almost inevitable that someone will try something risky or incredibly stupid. Frankie's charm attempt was minor compared to what some of my friends would have done, several of whom would have tried to steal some gold "just to see what would happen," or "because it's my alignment."

All the meta-game wisecracking and impulsive spell and ability use -- which is a lot of the game's fun of course -- can be a real bitch to dial down. Overall though, your players handled that wyvern pretty "well." Hyuk.

Also, I think "Bag of assorted Blow-Pops" and "High heels with hidden hypodermic" are the real standouts on that character sheet.

OED's spelling sounds like it's also pronounced WHY-vern, only they spelled it closer to International Phonetic Alphabet.