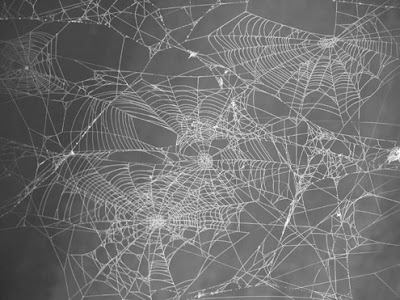 (Here's another one for Jeff.) Long ago, a small, brave spider named Oorld crawled all the way around the Earth, spinning and weaving a long, long web as she crept. The web collected all the stray ideas and loose thoughts in the world.

Pieces of the web still exist--some have been made into earrings. Holding a piece of the web near one's ear allows a character to hear billions of voices--a fragmented chorus of opinions and alleged facts about whatever the user happens to be looking at. The main effect is to make the possessor extremely tired (-2 to all saves).

Occasionally the formula for a useful spell or a powerful metaphysical insight is audible above the ill-informed din. Once per year the owner may make a wisdom check to try to find such a voice:

If the check fails, s/he is afflicted by a Class III effect,

if it succeeds, the web allows the possessor to use a Class I power OR may choose instead to make another wisdom roll in order to try to hear a more powerful voice,

if a second roll is made and failed, the user is afflicted by a Class IV effect (and gains no powers),

if the second roll is a success, the web enables the user to employ a Class II power (instead of the Class I power) OR the user may choose to make a third wisdom roll to gain even deeper insight,

if the third roll fails, the user will be permanently afflicted by some form of insanity,

if the third roll succeeds, the user will be permitted to use two Class II powers.

Email ThisBlogThis!Share to TwitterShare to FacebookShare to Pinterest
Labels: items

You won me at "brave spider".

The only part of The Last Unicorn that really got to me was the poor little spider.

Sounds like Fee-5's cool skill in Bester's _The Computer Connection_,