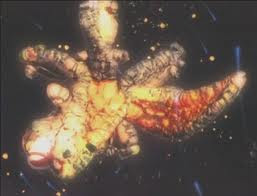 In addition to their ordinarily allowed spells, wizards may choose any one extra spell of any level and designate that as a "poorly remembered spell". This spell represents the caster Fucking With That With Which One Ought Not To Fuck.

This is a spell that the wizard kinda mostly is pretty sure he saw someone cast once while he was leaning over somebody's shoulder and pretty much thinks he can kinda guess how it works.

When cast, this spell has an unmodifiable 50% chance of working backwards--striking/affecting the caster and/or her allies (if it's a harmful spell) or the caster's enemies (if it's a beneficial spell). If the spell isn't strictly beneficial or harmful, then the GM is encouraged to interpret "working backwards" in the most disastrous possible light.

Reminds me of good ole Nahal's Reckless Dweomer, the Wild Mage spell that lets you try to cast anything in your spellbook-- but mostly is just an excuse to have a wild surge.

Awesome! Though I doubt the player in my campaign with the wizard would ever make use of this; she's far too cautious.

Zak: Would you allow a wizard to take a cleric spell under this rule? Heh, heh, heh...

That is a great idea. Speaking as the guy who usually plays the Magic User, OH, Yeah! I would do this...it would be very very interesting.

I really like this approach as a way to help lower-level magic users feel like they've got a little more oomph in their corner. I was going to adapt something similar alongside the Wild Magic table from SAGE. Would the poorly remembered spell be a one-shot thing?

Only if it kills you.

As I pointed out elsewhere, there's another possible effect other than working 'backwards' ... there's also working, shall we say, too well. In other words, like Vonnegut's ice that never melts, and ultimately turns everything else to ice. Isn't it true that part of casting includes getting the shut off valve closed at just the right instance, and not flooding the game area with random magic spewing out of the interdimensional rift created?

Totally on board with Ice-9 type effects.

Though I am also sympathetic to PC attempts to game the system by choosing some spell where both the desired effect AND it's presumed "opposite" are desirable in a given situation--since I like it when they're sneaky--and so if that's in the cards I'm likely to let them have the "backfire" they wanted.

Interesting. Personally, I like the idea of working the potential for critical hits and fumbles into any sort of magic, even if it's not something that usually requires a die roll... possibly adding the Kung Fu numbers in there as well. So there's always a chance of fumbling a Wish or getting that critical result.

One of the things that bothered me about Eberron is that we never established any sort of sense of how arcane magic had evolved over the last thousand years. One direction would be for older forms of magic to be more dangerous but potentially powerful - more chance of both fumble and critical. Over time it's been stabilized, but lost the potential for exceptional results as well as screwups.