They shall call the nobles thereof to the kingdom, but none shall be there; and all its princes shall be nothing. And thorns shall come up in its palaces, nettles and thistles in the fortresses thereof; and it shall be a habitation of jackals, a court for ostriches.
--Isaiah 34:12-13

Jackalmen are gnot gnolls. Gnolls have hyenaheads and they're tough. Jackalmen are scrawny and gross and they are all bad wizards. They usually wear spooky robes so they look like guys in old horror movies about cults in animal masks.

Also: Jackalmen aren't a species--they're a moral consequence. If a man should betray a friend in the Colossal Waste, he becomes one. If a woman should steal from an innocent, she becomes a horned she-jackal.

Stats are basically as a human magic user except roll 2d6+6 for intelligence, 4d4 for strength, plus enhanced hearing. They'll only bite you if they've carved a curse into their teeth or in case of genuine desperation.

They carry khopesh swords, barbed nets and gold sickles. The sickles can be imbued with a single spell at a time, storing the spell and discharging it when it hits a target--they can also be thrown. This is all awful. 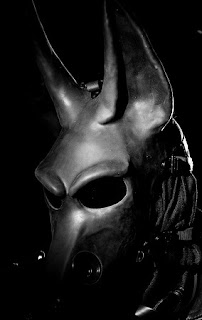 They worship Nathrekk the Devourer who is a three-headed jackal whose wide radiating mouths form a black blossom. It is said Nathrekk is brother to En Gorath, it is said they keep secrets from one another.

They live in the ruins of our cities, so their scheme is to encourage and then annihilate your culture. How far along in the two-step they've gotten depends what century and hex you're in. Their government is very Lottery In Babylon. Even in their most progressive phase they encourage only malefactors--organizing despots, crimelords, sellers of homes. 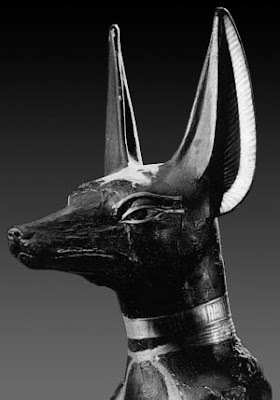 Jackalman magic involves disorientation, switching, the nesting of dimensions. Like a classic jackalman spell is turning a puddle of water into the surface of a deep and shark-infested vertical sea, another is fucking up your relation to physical space--imagine the weird inside-out rooms in the Red & Pleasant Land dungeon transported to a fake-Islamic environment full of fountains, muqarnas, bas-reliefs.

Probably the worst thing they do is throw babies. Specifically: they take a human child and stuff it into an outfit not unlike a baby-pajama version of siberian bear armor... 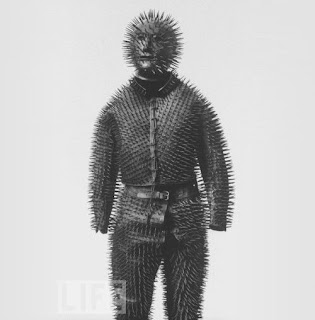 ...then huck the babies at you. If you catch the baby it might live, but then the spikes are poison--and also they're spikes.

Their leaders prefer to meet you before killing you. They'll typically be accompanied by a pair of sub-priests chanting a version of the Sanctuary spell that makes it impossible to attack or be attacked. They'll start by just talking if they can, taunt you, then leave.

They are ruled by the horned she-jackals, high-level priestesses--they will always offer you something you greatly desire in exchange for some seemingly innocuous favor, even if you've slain your way through their armies to get to them. They consider it a test of your meddle. 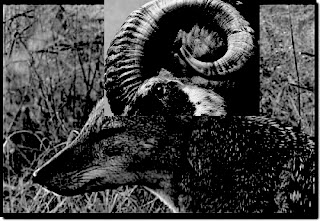 The book is written in a language used in Vornheim, though it is punctuated by terms and pictograms in the ancient language of the Waste and the tongue of the Jackalheads.

Read Magic will allow anyone to read the spells, regardless of what mundane languages they can read.

This text is difficult--it abrades the mind. Beginning as a desert travelogue, it descends into spattered polemic after its author--caravan marooned in the Waste by a bandit raid--kills his fellow travelers for water and recounts his initiation into the ways and society of the Jackal.

The book will reveal the key to the lottery runes and the myriad rites of the Devourer. Once read through and understood, the text will reveal answers to questions about the jackalmen or the horned she-jackals on a successful Int check up to three times.

It includes the following unique spells:
Mass Inscribe (Inscribes a lottery rune on everyone in a 30 foot radius--Level 1)
Clutching Coil (Once a prepared net, rope or other binding is wrapped around a target, the spell causes it to squeeze for 2d6 damage per round--Level 2)
Arrows to Asps (Affects chosen arrows immediately as well as any arrows of the caster's choosing mid-flight if they are shot this round within line of sight--Level 3)(This was stolen from some Conan thing.)
Thousand Claws (as Web but clawed arms reach from a surface. They inflict d6 damage per round--Level 3)
Deepwell (The puddle trick above--Level 3)
Scatter (This only works in a place you call your home and have lived in and prepared for an hour. Range 100'. Everybody in a 30 foot radius has to save vs spell or be teleported to a random room in your home--Level 3)
Derange Space (This only works inside. The entire room is subjected to a random Perplexity of the Interior as in Red & Pleasant Land, only Middle-East-themed--Level 3)
Steal Face (Take and convincingly wear someone's face until it rots off or they get it back. Range: Touch. Level 4.)

Reading the narrative or spells will force a save vs spell. A failed save indicates that the reader has been affected by the text--whenever they roll a natural 1 on a d20 they will be afflicted by desolate visions (treat as Confusion spell) for d4 rounds (d6 rounds if they've read the spells and the narrative) thereafter until treated with some activity or magic which cures madness. 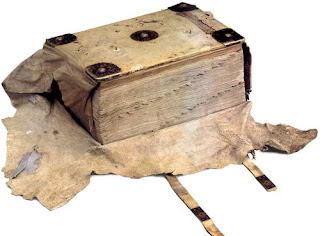 Running a game with a very Egyptian-based faction of assholes screwing with the party; this article should work nicely in complicating their lives further.