These are not by me--they're by a pair of anonymous DIY RPG peeps who were both assigned the topic "Religion in Fantasy Games: Solve It" and hope to win fame and fabulous prizes. 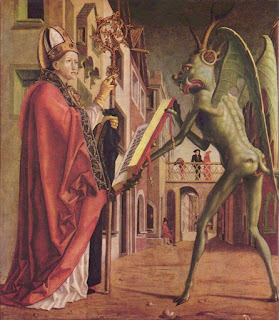 If you like this one better, send an email with the Subject "Vote RELIGION1" to zakzsmith AT hawt mayle or vote on Google +.

D&D has a problem with its gods. Because this is a world of monsters and magic, the gods themselves are written as active agents in the world. At higher levels they even become directly involved as NPCs, or enemies to be fought.

Leave that stuff to demon princes, arch-liches, and star-titans. Those beings can shake entire worlds, but they aren’t gods. Worshipping them has more in common with fealty than faith. If your god can really send a giant spider to eat you, or grant you magic powers, then faith doesn’t come into it. There’s no need for an ecclesiastical structure, you just do what the big glowing head and his super-soldiers say.

Picking a side might be of ideological interest, but it has little resemblance to religion.

Religion is showing up to mass every Sunday because otherwise you’ll be shunned by your neighbour. It’s a mandate to apply your law to everyone. It’s having a holy reason to chase that new family out of town.

Catholicism and Islam were at war for centuries, but nobody would actually say “Jesus Hates Muhammed, but maintains peaceful relations with Guru Nanak”.

D&D deals a lot with the very top and bottom levels. At the top, your deity is amazing and has all this power and influence. Maybe they’re imprisoned, or ruling on a distant plane, but they’re totally there. At the bottom, your character. You’ve got some powers directly from your deity. You wear their symbol, carry their weapon, and talk about them a lot. Maybe you hunt down their lost relics, which always carry power.

It’s a relationship that almost completely bypasses actual Religion. You might as well be a member of a particularly ideological order of wizards.

You can’t meaningfully use Religion in your game without tying it in with Culture. It’s the glue that strengthens a community, or creates barriers against those outside it.

And in many cases it serves as a justification to do something you wanted to do anyway.

Next time you're working Religion into a fantasy setting, forget the god. Don’t pick something symbolically perfect that character or region. Don't create a pantheon.

Instead create a load of hokey old nonsense and focus on how the people of your world use that to justify the things they always wanted to do. Soldiers serve the Mother of Peace by killing other soldiers. Healers serve the Bloody Maw by helping humanity grow. Industrialists fly the flag of the Golden Oak because technology the next logical step for nature.

The Faith is always secondary to what the faithful do with it. Two cultures, one enlightened and one violent, will both find a way to make the same religion work for their needs. Bend the rituals and faith to the needs and desires of the people.

Then go nuts with the disgusting rituals and silly costumes.

If you like this one better, send an email with the Subject "Vote RELIGION2" to zakzsmith AT hawt mayle or vote on Google +.

Religion should feel somewhat familiar to have an impact. For every cultist, priest or inquisitor, the referee should consider different ways people can react to religion and pick or roll one.

The trappings - doctrine, visuals, temples, churches - can be as freakish or banal as one wants, according to the campaign setting. The characters make the religion.

The referee should especially use characters that make them or their group uncertain. For atheists, this might be the good-hearted character who does or does not prosetylise, while for a deeply religious group, it might be the elder participating due to tradition and habit, with no faith. If inquisitors are hunting and burning witches, some of them ought to be wicked, others innocent. Some high priests ought to be sincere in their faith, while others just do their job since they get benefits, and neither of these should be by default more good or evil than the other. The referee should add the characters they find most disturbing.

The referee will, in this way, be able to show religion from several angles at once. This, if one honestly, will widen their own perspective on religion and give their players the opportunity for the same, while making the campaign world more complex and hence more interesting. Maybe there will even be discussion about religion, which is often interesting and illuminating.

Roleplaying is a fine tool for understanding others and the world. If religion is not interesting to the group, then this attention would be better placed elsewhere. Maybe social justice issues and issues of free speech? The same principles hold.
-
-
-

If you can vote two places, wouldn't it be possible for people to vote twice?

yes, but i trust people. plus there's a record of who voted on G+ and via email, so if it's in doubt i can just check

Wow. First text nailed it. Whoever wrote it should expand on the idea.

How do I get added to your G+ D&D circle so I can vote there? I'll vote by email for now but please add me to your circle on G+, thanks ฅ(♡ơ ₃ơ)ฅ

send me an email CONTAINING A LINK TO YOUR GOOGLE+ PAGE