I've said before that one of my favorite books that's accidentally about D&D is the architect Rem Koolhaas' SMLXL. A repeated theme in the book is a certain gap between the possible and the actual: architecture has--more than any other artform--the power to immediately shape the way people live but, the architect, potentially so powerful, is constantly hamstrung in the ability to make these transformations actually occur.

The person charged with making architecture occur is inevitably hemmed in by the very people and situations demanding that architecture happen in the first place--the sites, the climate, the regulations, the clients' psychologies--these combine to make the architect do a lot less than what unfettered architecture can do. Some things you get to choose, some you don't. Likewise a GM has the same deal: in theory a massive ability to create situations and structures, in practice there are rules, schedules, distractions, player preferences, player expectations, etc.

The most obvious solution is to try to extend the zone of controllables as far as possible: make sure the room is like this, insist players arrive on time, publish a page of background for them to read, design a ruleset with detailed hacks, schedule in snacktime and know where you're ordering from. Then just pray the uncontrollables fall into line. 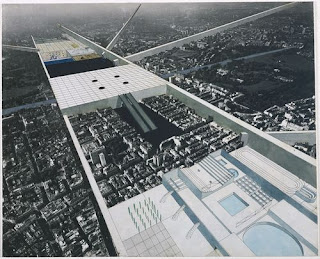 Koolhaas' architecture stories often are about adopting (being forced to adopt?) an alternate strategy--not omnipotence and control but omnidirectional provocation. Creating one radically disruptive element that does not so much control the uncontrolled elements but force them into adopting some kind of relationship to it.

Koolhaas gives the Berlin Wall as one example: viewed solely as an architectural situation, it demanded a wide variety of responses from the buildings around it, not always the same ones or predictable ones but it demanded them. Another example is the elevated train lines over dense neighborhoods: in East Williamsburg on Broadway everything is either in the shadow created by the JMZ line, looking out onto the JMZ line, or above the JMZ line. Every building has to have something to say about the JMZ, every person has to find a response to it. 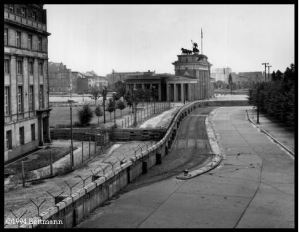 So point is this is a metaphor I've found useful, mid-campaign, when so much is already an uncontrollable given: the players know they're in a fantasy world, there are orcs not because I put them there but because they're expected, there are peasants and farms for the same reason, a new player's arrived and I have no idea where the players are going to go next session.

Instead of making the adventure out of an attempt to prune away elements to only what I want the players to play with, I create something that, no matter where I put it, activates (rather than replaces) everything--a thing that they have to deal with but that the range of responses is not set. An alien ship landing rather than a rat maze. 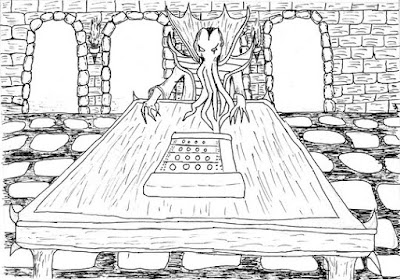 This is what complicated, demanding monsters and items are for: they can be set down anywhere, even in the middle of a sandbox session where you have no idea what choices the players are about to make, and everything in the environment suddenly matters no matter what that environment is. The rorschach fight or the spineskelle make everything in the immediate environment dramatic.

Nice observation. You really strike a nice balance between unexpected weirdness and things that players can relate to. For instance with your knights of Tiamat, the knigths on themselves are something your players will readily accept, but their powers will probably come as a surprise. Is this balancing act something that comes naturally to you or is it a more active process in which you really think about how to implement unexpectedness without going overboard? For me it would be the latter.

And thanks to remind me of the Spineskelle; I definitely need to run one of those!

Since some players are really used to how I run things and others are new and there's a wide variety in between, I make a conscious effort to balance accessible things with weird stuff I just thought up

I am very glad for this. Running an open sadbox D&D game at a meetup means I've constantly got a conflict between wondering what the established players are doing, and grabbing the attention of walk-ins.
This post is It.
The sessions where everything has clunked into place are the ones where there's some disruptive thing (new dungeon or location, weird thing in this town, person has odd disease, etc) that means new and old players can deal with it from similar place.
The sessions where it feels like it's falling apart at the seams are the ones where the established players are trying to do something that the newbies don't have enough back-play to care about.
Having a disruptor to rally around is the thing that brings both sides together.

Fast forward to the future when an architect references a work of Zak as his favorite book/blog that's accidentally about architecture.