These are the next two new entries for the Thought Eater DIY RPG Essay Tournament.

If you don't already know, these essays are not by me--they're by a pair of anonymous DIY RPG peeps who were both assigned to write about: Address an Often-Ignored or Derided Thing In D&D for the contest. 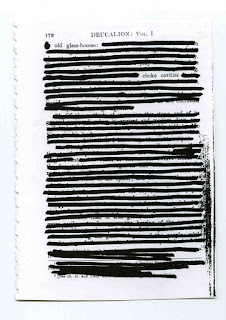 If you like this one better, send an email with the Subject "IGNORED1" to zakzsmith AT hawt mayle or vote on Google +. Don't put anything else in the email, I won't read it.

One of the first aspects of D&D that many players ditch or change or ignore is alignment. It is no wonder. The alignment rules are a mish-mash of simplistic personality mechanics and allegiances to higher powers, with several of the players’ choices simply being unplayable or disallowed by a reasonable DM, who could actually improve his campaign by removing alignment (in fact, there is an old Dragon article that makes that point persuasively). Having no alignment rules means no tedious arguments or pronouncements about what a “Lawful Good” character would do, or not do, and, if a player has his or her characters do something dumb, that player won’t be able to say Alignment made me do it.” A character is as a character does, and writing “Lawful Good” on a character sheet means nothing if the character is actually “Paranoid Greedy.” Personality does play a role in D&D characters, but that role varies, and it is best handled at the table.

However, alignment can also represent an allegiance or orientation to a greater ideal. This use of alignment is most evident in early editions of the game in which characters who violated their alignment could lose experience points, characters of the same alignment could communicate via an “alignment tongue,” and many spells dealt explicitly with “Good” and “Evil.” Indeed, some of those spells are present, one way or another, in every edition of D&D. However, in subsequent editions of D&D, alignment has drifted away from this allegiance toward simply serving exclusively as a personality mechanic, something for which it is ill-suited. Although not every D&D campaign needs alignment, some campaigns do need it, not as a personality mechanic but as a guideline for dealing with universal principles or ideas made manifest.

How would this version of alignment work conceptually? First, a DM would only use alignment if the campaign called for it, if these universal principles or ideas were also represented by NPCs, monsters, places, and/or events. Second, the DM would have to choose those universal principles. Certainly Good and Evil and Law and Chaos are classics, but it is possible to come up with different alignment systems that are not binary, such as the Endless from Neil Gaiman’s Sandman series, and the various ideas that they represent. In that setting, even the Endless (the powers who govern the various alignments) have multiple alignments. It might even be possible for someone to have both alignments in an opposed alignment system such as Good vs. Evil. It even makes sense. Are any of us simply good or evil? On the other hand, in some systems, alignments might be mutually exclusive, as in the case of James Raggi’s Lamentations of the Flame Princess, in which Law, Neutrality, and Chaos represent three radically different ways of being connected (or not) to the great forces of the universe.

Once the DM understands the alignment system he or she will be using in the campaign, the DM must decide how to use the system in play as a DM and as a player. One of the best ways for a DM to make alignment come alive is to apply alignment to NPCs, monsters, and locations. If Chaos is an alignment in the campaign, then entering the chaotic ogre’s cave is not simply a matter of going somewhere gross, it is a matter of entering a place in conflict with reality. Perhaps when the PCs enter the ogre’s cave, it is the ogre itself that they enter, and this remains true even as they fight it face-to-face. PCs too should be given a chance to demonstrate their alignment, to benefit from it and to suffer for it. A good example in Fifth Edition D&D is the paladin, who obviously gains power from alignment with certain ideals, and who can lose those powers too, for not acting in alignment with those ideals, and who can gain power again by embracing the opposing ideals. But as good an example as the paladin is, it could go further. Paladins -- or any characters -- who respects their alignment should be respected by others of the same alignment even if circumstances put them at odds. In addition, those characters who embrace their alignment should have an easier time dealing with environments that match their alignment. A chaotically-aligned character, for example, should have an easier time in the ogre’s cave than a lawfully-aligned one.

One temptation that DMs should avoid, however, is turning alignment into a number, like faction. Universal powers and ideals should not give out bennies like the Harpers or the Zhentarim do. Luckily the advantage / disadvantage mechanic of Fifth Edition D&D covers most passive benefits and drawbacks that alignment could provide, and I would suggest using it. More active benefits and drawbacks require dealing with the NPCs, monsters, places, and great powers devoted to or oriented toward particular alignments. As PCs become more powerful, they should start drawing personal attention from powerful beings, and anything that happens as a result of those interactions should be based on roleplaying, not an alignment number.

If DMs were to get rid of alignment as a personality mechanic, they could focus on alignment as a connection to important, universal ideals. This focus is not necessary for every campaign, but if it used, it should be used correctly. This means deciding on those ideals, coming up with guidelines for following them, and avoiding the trap of tracking them with numbers. Alignment is an important part of D&D’s history, and although it should be kept as part of the game, it needs to get back to its literary roots in works such as Michael Moorcock’s Elric saga.

If you like this one better, send an email with the Subject "IGNORED2" to zakzsmith AT hawt mayle or vote on Google +. Don't put anything else in the email, I won't read it.


Tasked with mining some value out of a frequently ignored or derided thing in Dungeons and Dragons is a bit taxing when you don’t actively play Dungeons and Dragons. From my loose knowledge, I could write about the bollocks that is encumbrance tracking? Maybe focus on the box-thinking logic of the alignment system? Hell, which version of D&D am I supposed to be considering here? Let’s chuck a random fireball into the dark and look at an aspect of the spell system – the use of spells.

A magic user can cast x amount of spells based on their level and intelligence level but once they’re cast they need to rest up to recall them. The second they’re cast, they’re forgotten. The idea that someone would need 8 hours to commit something they've read repeatedly previously just seems wobbly at best. I get that reading a magic spell isn't the same as memorising a poem but there should be some middle ground here. If all that mage is doing is reflecting on one or two spells, they should be able to at least attempt casting them more than predetermined number of times per day.

Instead let’s try and push to the side how it works at the moment and see what we can do.

Our subject Geoff, a young wizard in training, has learnt the spell “Magic Missile”. He’s fully refreshed, he’s literally just put the book down – its in his head and good to go. He cast’s the spell successfully with no hesitation at a scarecrow opposite him, sending bits of straw sky high and surprising the poor mouse that had been nibbling away inside. Excellent work Geoff!

He turns to the next target scarecrow and thinks back to the spell. It was pretty complicated for someone starting out, but he has just read the spell like a minute ago and he’s not an idiot. He is however inexperienced and magic takes it out of you, so a Constitution check is required. He passes (he’s a young bloke, fit and healthy) and he successfully casts it again. This happens several more times successfully, littering straw everywhere, but he starts to get a bit drained. He knows he shouldn't push his luck, but he tries one more time and of course fails his Constitution check. Poor Geoff.

This time he needs to make a second roll, lets call it Save Vs Fuck Up. Each spell now has a Fuck Up value between 1 and 20. The player needs to roll over it, applying their intelligence bonus. If they succeed, the spell is still cast but that spell is now corrupt in their head – much like when you’re trying to recall your PIN number at the ATM but forget it momentarily and start coming up with vaguely similar numbers that you’re sure are correct (but in fact wrong), the spell is now jumbled up in your head. If they fail the roll, then something bad will happen depending on the spell – its not just a failure, its an incorrectly cast spell. The Magic Missile example would obviously be something like the caster taking the damage. Other spells could be more disastrous (What if the floating disc ended up being cast inside the magic user? What exactly would happen to a character that used a spell to open a locked chest incorrectly? Eww.).

You can attempt to cast the spell again but must still make the constitution check and the Save Vs Fuck Up check. Resting/taking time to re-read your notes will correct it however. Yes, there’s nothing mechanically then stopping a mage from flinging fireballs all day but then there’s nothing stopping a fighter from swinging his sword all day either. The deterrent is the risk of failure.

This could be modified to include a sliding scale for difficulty too if the above seems to make the magic user to over-powered – perhaps every casting of the spell sees the difficulty of the Constitution check increase? Add a sliding scale of difficulty to the Save Vs Fuck Up and you’ll be pulling that mage in a bit but not leaving them entirely without options should they find themselves in a corner. It's a step towards making things a bit more exciting at any rate as opposed to a flat out, "No, you've cast a set number of spells today, you're done till you have a nap.".

Magic should be dangerous, unpredictable and deadly. I'd rather be playing in a game where mages can do crazy powerful things but are more likely to screw themselves over in some interesting and gruesome manner.
_
-