Next pair of entries rolled in for the Thought Eater DIY RPG Essay Tournament.

Here's the drill: these are not by me--they're by a pair of anonymous DIY RPG peeps who were both assigned to write about Some typical feature of RPGs or D&D that doesn't work for you in your game--how and why and whatever else you want to talk about. 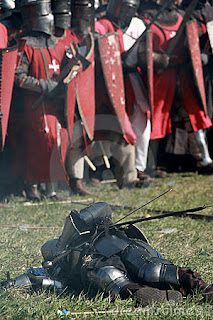 If you like this one better, send an email with the Subject "FAIL1" to zakzsmith AT hawt mayle or vote on Google +. Don't put anything else in the email, I won't read it.


Binary Combat, Win or Die: Why Not Other Stuff?

A Dungeons & Dragons combat encounter, despite requiring dozens of dice rolls, has only a binary resolution. Either you die, or your enemies die. Looking through the 5th Edition Player’s Handbook, the word, ‘surrender’ doesn’t appear once within its 316 pages. The word, ‘flee’ shows up only in the context of mounts and the Command spell. Nowhere do the rules suggest that a conflict might end in anything other than death, and while the Dungeon Master’s Guide makes some effort to address this with the addition of chases, that only adds the possibility of two new outcomes: you escape or your enemies do.

So you might be thinking, ‘So what? Why doesn’t this work?’ The simple answer is that it means a story involving combat can only move forward one way. The party fights and wins until they don’t, at which point a new batch of intrepid heroes begins fighting and winning. Every encounter has to be engineered for success; doesn’t that sounds bland?

Interesting stories require failure. Someone fleeing for their life might break their leg sliding down a ravine, or get their pack torn off by a tree branch. A defeated hero might lose an arm or an eye. He might wake with an ailment, bestowed by the rats nibbling on his fingers or a mosquito helping itself to what little life he has left. Of course, not all failures should be negative. Fleeing heroes might also stumble into a cave and find a lost treasure, or be rescued by a new friend. Similarly a victorious hero should sometimes pay a price for his success. These sorts of things can be found in any story ever written, but they’re utterly absent from D&D. When we lose, it's generally game over. We roll up new characters and begin a new adventure. When we win, we win completely. We bear no battle wounds, and we bury no friends.

When you sit down at a gaming table, your prospects are limitless. You might wake a dragon and slay it, or unleash it upon an unsuspecting village. You might skip over the dragon completely and befriend a vampire. It’s what makes roleplaying games so special. Doesn’t combat deserve more than a handful of outcomes? We’ve got a table with fifty results for a wild magic surge, shouldn’t combat warrant at least that many?

If you like this one better, send an email with the Subject "FAIL2" to zakzsmith AT hawt mayle or vote on Google +. Don't put anything else in the email, I won't read it.


Individual initiative is a rule concept that has never worked for me.

The concept of initiative in RPGs is very old, being inherited from wargaming. Initiative is the means of determining the order of operations in situations where "time" is important (e.g. combat). Initiative is also important from the perspective of the GM, as it serves to prevent all the players from yelling at you (the GM) simultaneously.

It is this form that I've just had a very hard time making work for me as opposed to against me. I've a few specific issues all of which are exacerbated in grid-less, "theatre of the mind" combat. The following assumes grid-less combat happening in person (i.e. not online).

Individual initiative serves to atomize combat, with each players acting only when it is there turn. Because each players acts effectively independently, there is a decreased incentive for the non-acting players to pay attention. This tends to result in having to re-explain the entire situation at the start of each player's action. For example, one of my last 3.5 games which I ran in 2009 without a grid suffered greatly during combat. Given that 3.5 combat is slow in general, it was only slowed by having to re-describe the situation all over again every few minutes to my perennially distracted/distractable players.

Combat is supposed to be a dynamic experience, where the characters run and fight in the maelstrom of blades and body parts. Static initiative, a hallmark of individual initiative, only works against this. Given the slow-down caused by atomized combat, having the turn order of combat be static from the first round prevents this. Instead of characters jockeying for position in both time and space, they can really only control their spatial position. Yes, moves like "delaying" get around this, but this is ultimately artificial and doesn't allow for strong dynamism; an alternative would be allowing PCs to re-roll their initiative but I've found that to be an uncommonly written rule.

The atomization of combat also elevates the individual character over the party as whole. Each PC has the individual opportunity to act with almost no direct interaction with any other PC. While moves like "delaying" get around this, this is again ultimately artificial as individual initiative is incompatible with two or more characters acting simultaneously. Players are disincentivized from working together to solve problems. For example, it is weird and artificial to make it so players can use a rope together to tie up/trip opponents or work together to tackle or lift something heavy. This translates into an even less dynamic combat.

In contrast to individual initiative there is group initiative, an idea as old if not older than individual initiative. In a standard group initiative model, each side of the combat (PCs vs NPCs) roll a single die and which ever rolls highest goes first. This is then repeated after each side has acted, so that each round has a potentially different order. Traditionally, no bonuses are applied to this roll. During each sides turn, characters can act in whatever order they feel like, potentially breaking their actions up based on other characters choices. This system is extremely difficult to use for a grid-based combat scenario, but I find it ideal for grid-less combat.

Group initiative is an inherently more dynamic experience because the whole party acts simultaneously and because the order of combat is not set in stone at the beginning of the sequence/scene. Also, because everyone acts simultaneously, all players are inclined to pay attention and communicate with each other. Finally, I've found all these factors combine to dramatically increase the overall speed of a combat scene.

A technique I use to improve player attention is to rotate around the table who the "initiative roller" is; this approach pulls the table together and adds a fun "group" emotion. Everyone is in the combat together. This serves to elevate the group over the individual, which then improves the mid-combat roleplaying, and further improves the group cohesion. PCs are always in reference to each other as opposed to acting as a lone figure on a static board.

In terms of common rules I find individual initiative the hardest to implement and I've decided that it just doesn't work for me in general. While there are alternative forms of individual initiative (e.g. Feng Shui's shots system), they are not as common. In contrast, group initiative is an ideal alternative for preserving the dynamism and engagement of the players in combat scenarios. All of the players I've played since making group initiative my standard (6 years) have all agreed that for grid-less D&D-type games it really improves the flow. It does not surprise me that after two editions of being absent, group initiative was finally re-included as an optional rule in the 5th edition Dungeon Master's Guide.
-
-
-

"Fleeing heroes might find a treasure, or defeated heroes might have to pay a heavy price" is something that badly wants a d100 table to go with it.

"Group initiative is better than individual initiative" is true but given the dozen or more articles already written on the subject I'm not sure it's original.

Nice reads as always, the idea that enemies and or characters can surrender is not that innovative though. It's true however that it didn't really matter for most of official D&D writings.

Not feeling either of these. Please note my perspective is entirely from a first edition AD&D point of view. One says we need a run away rule. I disagree. Running away is a player action easily covered by the existing rules of combat and movement. Running away to live to fight another day is mentioned multiple times in the 1e DMG.

The other feels group initiative is superior to individual initiative. I agree. Old news and nothing new or insightful added.

1- Total victory
2- Total loss. Game over.
3- The fight ends abruptly when it attracts/angers a third party, chase off one side
4- As above, but the third party forces both sides to scatter. Everyone gets lost.
5- As above, but when they get lost, the weakest member from either side are together in hostile territory. For more hilarity, if its conceivable they might get tied together with a rope, chain, or vine they can't break, they get tied together.
6- One side wins, but an innocent bystander got involved in the combat and was slain, angering powerful and/or important NPCs.
7- Victory, but you use up a certain resource
8- Victory, but your backpack is ripped and you can't carry as much stuff as before.
9- Victory, but PC suffers lifelong injury
10- Victory, but somebody died
11- Defeat, but the PCs retreat with heavy wounds
12- Retreat, party scatters and is lost from each other.
13- Defeat, party is left for dead but rescued by friendly natives
14- Defeat, party is imprisoned to be hung/sold as slaves. Prison Breakout level?
15- Retreat, the party shakes off pursuers in the sewer level. For obvious reasons.
16- Retreat, the party discovers something cool (Treasure, Safehouse, new dungeon?)
17- Retreat, the party falls into a hunter's trap (hunting what exactly?)
18- Victory, but it turns out that you just accidentially started a war by killing the hobgoblin diplomatic liason to Humanland.
19- The wild mage creates a magical anomoly that sends all combatants to randomized points in time/space.
20- The monster just wanted to ask for a cup of sugar.