If you don't know, it's like this: these are not by me--they're by a pair of anonymous DIY RPG writers who were both assigned to write about: Common people in RPGs for the contest. 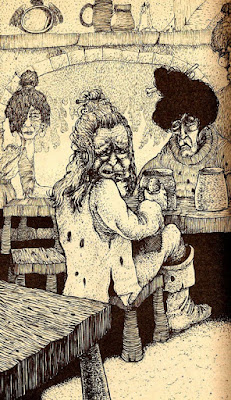 If you like this one better, send an email with the Subject "COMMON1" to zakzsmith AT hawt mayle or vote on Google +. Don't put anything else in the email, I won't read it.

Let's face it: many adventuring parties are just self-aggrandizing murderhobos who've gotten a bit too big for their britches.  They think the world revolves around them.  But it doesn't.  Sure, they can shape it, break it, maybe even save it now and then, if we're lucky.

But they didn't make it.  They don't keep it running.  They're not down in the grit and the grime and the grue day in and day out, struggling to keep economies running and societies flourishing while barely making ends meet for themselves.  There's no glory in peasant work, in being common.  Yet being "common" is probably the toughest gig around.

"Common people" in RPGs -- especially in medieval(ish) fantasy RPGs -- face lethal danger and adversity every day of their lives, in the form of plagues, starvation, oppression by their masters, and a host of other forces conspiring to put them in unmarked premature graves.  These are threats that cannot be quickly defeated by swords or spells, threats that linger after the high-faultin' murderhobos leave town on their next epic tomb raid.  "Common" people -- that is to say, the peasantry -- deserve much better treatment than they get in most OSR games, where they are usually an afterthought if they're thought about at all.

I have a house rule for NPC commoners in my OSR campaigns that reflects this struggle: for every year of life beyond attaining self-sufficiency (usually age 16 for humans), a "commoner" gets either another hit die beyond 1, or a +1 bonus to Constitution-based saves or resistance rolls.  These benefits are cumulative, so grizzled old veterans become a bit more of a challenge should any prissy young adventurer types decide to harass them for sport or spite; such a common man can't dole out much of a beating, but he can take one, and take it in stride.  And subsequently shame or embarrass the hipster with a sword just by leering and grumbling, when the little piss-ant clearly expected him to buckle.

Every "commoner" is a folk hero who never happened.  There but for the grace of the DM your average dungeon delver would have gone.

Common people give DMs a chance to keep PCs grounded, to put their actions in perspective, and to reign in their high-falootin' attitudes with a healthy dose of community shaming when necessary. After all, who picks on Old Fred? I mean, really?

I've been lucky that most of my players over the years haven't gone out of their way to abuse the peasantry, so I've gotten the point across in other ways, like surprising them with how much punishment Willie the Farmer can take in a fight against bandits, or how resistant Willa the Milk Maid is to the lich lord's plague that laid them low.

And when the PCs have taken the time to notice the resilience of common folk in the face of such crippling, daily-grind horrors, it often inspires them to greater heroics, or becomes the basis of a whole new character-driven quest to save the land not from rampaging monsters, but from degradation or virulent disease.

If you like this one better, send an email with the Subject "COMMON2" to zakzsmith AT hawt mayle or vote on Google +. Don't put anything else in the email, I won't read it.

Common People Define Your Game World (and sometimes the game itself)
Commoner and peasant NPC’s in your game can help define and flesh out your campaign setting. Their descriptions, their stats, their implementation, and even how they are generated provide an insight into what your game world is like: how mortality is treated, what kind of status quo your world operates on, and how the same world differs for the player characters.For the purposes of this article, common people (commoners, peasants, serfs, townsfolk, etc) are different from hirelings and henchmen. The latter takes an active role with PC’s in dungeons, the former doesn’t. That said, a common person can become a hireling given certain circumstances, but the two aren’t interchangeable.Let’s look at some examples from different games:
How easily a commoner is killed compared to a player character shows how lethal your game and your world is. If both characters are killed by roughly the same amount of damage, that’s a pretty lethal world. If commoners tend to die more easily than PC’s, that’s a more forgiving world that takes expertise and protection into account. If commoners can die in droves, but PC’s seldom die, then that’s a world where they are exceptional and favoured.How commoners behave in the background of a game also informs the world of that game, and can highlight where there are inconsistencies. Are the common people in a city all gruff and crazy and jonesing for a fight but their surroundings are pretty tranquil with few random encounters? That doesn’t line up. Are the kings/queens/viscounts/dukes in your setting all awful and corrupt? The common people should then be doing what they can to revolt (or at least be scared after their last peasant revolt was put down).When you are generating or preparing common people for your game, consider what impact they have on the game world, because there should be an impact.
-
-
-

Any word as to how many more of these in the first round?