If you don't already know, these essays are not by me--they're by a pair of anonymous DIY RPG peeps who were both assigned to write about: The Infinite In Games for the contest. 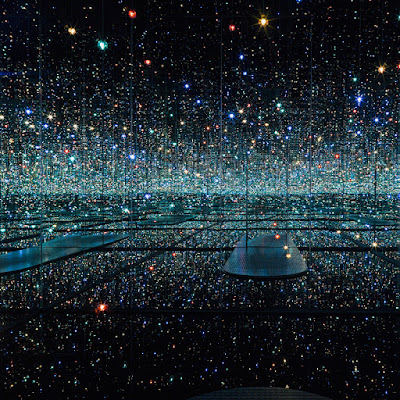 If you like this one better, send an email with the Subject "INFINITE1" to zakzsmith AT hawt mayle or vote on Google +. Don't put anything else in the email, I won't read it.

You want is a system created that enables you infinite play? A campaign that goes on forever?

You can’t have it. Nothing is boundless. There is no infinite game. Everything ends.
And that is beautiful.

Infinity is fucking scary. It’s wrong. It has no place here, in our hearts and minds. The Abyss is infinite. I hear that when you gaze into it and it gazes into you. (Though it also has 666—a finite number-- layers so try to make peace with that, too) The Infinite is unknowable and immeasurable. It’s what your adventurer is going out into. It is the void that births the horrors. It’s why part of you is still afraid of the dark, and it’s why you get gooseflesh when in that one room in your house. It’s why when you gaze long into that starry night sky, you feel inspired but also small. Very, very, small.
Lives, objects, things around us—those have beginnings, middles, and ends. We can measure them. We can count them and we can know them. But the infinite is amorphous, unbound, and unknowable. Infinity has no end, and no structure. Endings are what define us.

One day, you will stop playing Dungeons & Dragons.

Any number of things might stop you. Your Cleric may need to work some extra shifts on Thursdays, or maybe you asked out another player and even though you both promised it wasn’t going to be totally weird, it’s still totally weird. Maybe you just had twins. Your partner doesn’t game and you’re not comfortable leaving them with two newborns so you can go pretend to be an Elf for a few hours.

One day, you will roll dice for the last time.

From that, we have two useful ideas for gaming. The first is that Infinity is scary. As a player you struggle against it. Adventure is the act of striking out into what is unknown and undefined. You are on an undertaking that seeks to create an ending, to give structure to the boundless--to tell the untold.

As a referee or game master, you use the various infinities as tools. You present them to players, and interpret the results of their choices. Tap into the fearful nature of the infinite, and never take it for granted. Don’t ever present or use the known. When the Goblin becomes a pest to be exterminated instead of a horror to stand against, retire the goblin.

The second useful gaming idea is to make every roll count. If you’re going to spend 4ish hours of your time each week, plus your prep, make sure you’re spending it well.  It, like everything else, is finite. It ends.

Try new and crazy things. Don’t play with rules you don’t like. If you find you need a new rule for something, make one. Write it into your PHB with a black permanent marker. If it sucks, scratch it back out with that same marker. Make what you are playing hard--a challenge. Talk to everyone and everything. Pick up everyone and everything. Break the magic staff. Slay the monster. Insult the wizard. Seduce the High Priest. Carouse. Use a lot of random tables and accept the result. Play hard. Die. Roll 3d6 six more times and go again. While you’re rolling those 3d6 six more times, look around the table and ask the Halfling to pass the Doritos. If the Dungeon Master is getting up for a beer, ask them to bring you one and ask if she wants you to roll for starting gold. Then look around and realize that you’re working hard, playing like a fool and doing it with a few of your closest friends. That beer is going to taste motherfuckin’ delicious.

Take that. Take your infinite, your interminable horror. If you did it right, it’ll make your skin crawl. Add the Halfling Rogue you asked out and with whom things are still totally weird, but hey, they passed the Doritos so maybe it’s not a lost cause. Your cleric friend just (finally) finished their shift, and you’re rolling up what might just be a serviceable paladin. And that’s good, because the Dungeon Master hired a baby sitter, and put together a new matrix of random tables to try out tonight.

If you like this one better, send an email with the Subject "INFINITE2" to zakzsmith AT hawt mayle or vote on Google +. Don't put anything else in the email, I won't read it.

"Kingdom A is ruled by Queen Blaah and..." I've seen so many settings described like this. Details about people, history, ongoing conflicts etcetera. While much can be said about the format of those descriptions, I want to talk about the WHEN of all those settings books.

Let's say you play a game with an extensive meta plot and LOTS of setting material. At what point will all that material start becoming useless to you? I was co-GM in a campaign set in a world like that. The other GM and I spent a whole lot of time discussing how the latest events set off by the players would reflect in changes in canon information. The collective amount of information in the meta plot was centered around a snapshot in time - the reason for which I believe must be the ease at which something like that can be written. Whenever we drifted too far away from that specific point in time, we would reboot the campaign with new characters at some other place in the setting. We had paid for those books and spent hours reading them AND GODDAMNIT IF WE WEREN'T GOING TO USE THEM!

Moved to a new city. Joined a new group. Same game; same setting. A year later I realised I hadn't flipped through those setting books again ever. Now, almost a decade later, I still haven't.

Because when this group moved further away from that frozen snapshot in time that the canon info presented, we just tossed the books aside and said "Now THIS happens!" And bam. Suddenly our campaign had gone several hundred years in game from canon. World wars. Mass migrations. Demonic invasions. Nothing was the same, and all I've kept at hand are the pretty nifty looking maps.

That never-ending campaign that we keep returning to year after year is all in our heads and notes now. Most of the players have been replaced a couple of time over the years and together their memories form a mosaic of amazing stories. The only part of everything that nobody reflects on is that starting point. That shitload of books that was only interesting to me and the other GM (yes, I've co-GMed this one too) for a very short period in the beginning.


These days I relish in setting-neutral adventures, locations and tools. Those are the kind of books my campaign will never move away from. That possibility of infinite fun and development is not in shelves and shelves of crap static fiction anyways.
-
-
-

A great pair of articles and a hard choice...

Also, somehow I had made it this far in life without knowing about Yayoi Kusama. That Infinity Room photo blew my damn mind, and then I went and looked at more of her work and it blew up whatever was left. So thanks, Zak, for continuing to expose us game nerds to awesome stuff from other realms. Pretty sure that infinity space is going in my Star Wars campaign.