The key to taking the beast is a clattering music which deranges it internally, rendering the mind of the unicorn inchoate and sensitive. So long as the authors of such sounds ply their trade in earshot, the unicorn cannot be calmed, and will act to thwart any kind hand.

The apparel of unicorn thieves is inevitably motley and fucked, clashing poignantly with the greens of long grasses and trees through which their quarry is wont to frolic and roam. They go in groups of at least ten.

Typically thieves will be encountered loudly  returning from a successful chase: the animal ridden by two or three goblins playing bells or awful concertinas, preceded by outriders with flails and horns atop barded hunting destriers and surrounded by spit-rusted tubas, played by hunters with nets, and also fanged hounds. 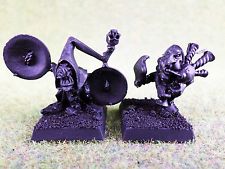 The din produced by these companies not only disorders the mind of their victim but alerts whatsoever lord or monarch has commissioned the hunt as to the company's success and current location.  The PCs will hear and then see the thieves, and can immediately be sure that a company of knights is on an intercept course to join in custody of the prize.

So long as even one of the band plays, the unicorn will remain in a state of desperate servility, lashing out at any who attempt to protect it. Wealthy thieving companies visit wizards before the hunt, and festoon themselves with wards against the dreaded Silence spell.

The challenge for parties is to not only rout the hunters and stymie such of the lord's retainers that might be coming to meet them, but to somehow destroy or distance the unicorn from the noise, under the influence of which it will relentlessly and even suicidally attack.

And now a word from our sponsor:

I always liked the scene in The Once and Future King where Gawain, Mordred & co. capture the unicorn, behead it and drag the rotting head back to their witchy mother. I imagine all unicorn thieves as gruesome as that.

What do the knights want with the unicorns? Do they ride them into battle? I could see knights with all chimes and cymbals on their armor, and a goblin flutist in motley.

What are those little guys? I want them!