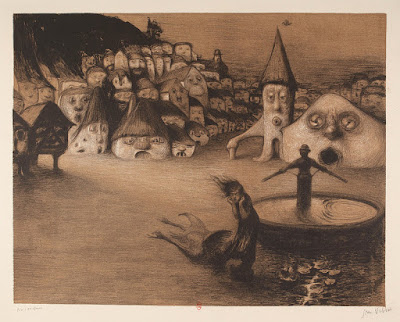 Every gnome was once a home. Their eyes were once shuttered windows, their mouths wooden doors, their pointed caps once turret roofs. They bear inside of them the memories of vanished occupants and homely meals.

The process begins when the home becomes bored. Typically this occurs when it is abandoned, but in a few known cases domiciles have gone gnomish due to extraordinarily tedious occupants. 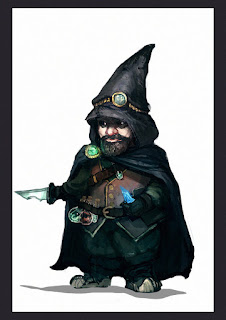 Gnomes do not possess what we would term interior organs--they have instead a series of cavernlike chains of mineral tissue occupied by sparrows, gray mice, and the like. These are the lifeblood of the gnome and, if the creature is injured, they may flee the hollows of its enigmatic body.

Gnomes gain bonuses to wisdom and constitution proportional to those granted in the system they are in and have advantage when looking for hidden things in domestic spaces. They assuage their guilt over ceasing to be available to occupants by seeking gold, devices and precious stones with which to furnish and gild the new homes they build to replace themselves. In tomes bound in bone they record the process of birthing these imperfect wood and stone clones.

Being gnew to everything, they are intensely excitable--gnomes, who have been known to see merely moving across a field of heather desperately fascinating well into their eighties, find the kinetic thrill of traps and combats intoxicating. They despise any fire not properly contained in a hearth or lantern.

They get along with halflings but find their cuisine alien, as gnomes eat only eggs. Dwarves like to rub their noses for luck, but consider them dangerously naive. Elves, whose homes and purposes are eternal, simply find them baffling.

And now, a word from our sponsor (who has agnother take on gnomes altogether)...

Gnice work, I'd play that character in a heartbeat.