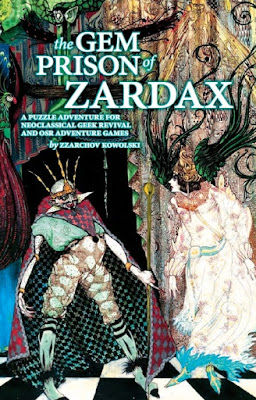 On the one hand: Zzarchov is a pal. On the other hand, ever since I noticed that his game Neoclassical Geek Revival gives your character extra wotzits for having a beard I've known we have different sensibilities and I don't just mindlessly recommend everything he sends me because a lotta times I haven't even managed to read it. I'm pretty busy over here.

However:
Gem Prison + Puzzle Dungeon + Scrap Princess on the art is a pretty irresistible combination for me so I devoured this.

The Harry Clarke cover is pretty cool too and about as nice as a public domain cover is likely to get, though I do kinda wish Scrap had done the cover too because, hey, Scrap Princess. But then in pdf products the "cover" is an increasingly notional concept and merges pretty cleanly into "ad" so it's all in some kind of liminal product designspace I've already wasted too much time talking about fuck it let's roll.

Anyway, up front: I will run this adventure. So that's like like 4 stars already. I will change it, but I will run it.

Your players appear in the extradimensional gem-prison. Each room is like its own spooky room connected to the others by non-euclidean means.

Each room gets a page to itself which has a fine map with plenty of room for you to add stuff, cleanly laid out text, typically one or two simple but surreal gimmicks (zero gravity, utter silence, etc) whose implications for "solving" the rest of the dungeon are well-considered, and an expressionistic color drawing by Scrap Princess. A little less than half the 48 pages is these rooms. 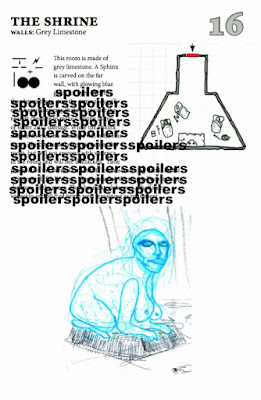 There's several off-kilter spells, items and monsters ("the wasp appears as a tyrannosaurus sized wasp made out of polished silver") scattered within and detailed as well as a few meta-rules which make travel through the prison overall kind of strange.

Zzarchov's sensibility runs somewhere between a sly Ashton-Smith fairytale light touch and jaded post-Dragonmirth gonzo ("Each room is a different colour. The wizard thought it looked “spooky” and “cosmic”, though it just seems tacky now."), but with  a half-second of reskinning and the adventure fits pretty much any kind of campaign from grim-and-gritty to Princess Bride. Change the paint and put new heads on the monsters and this could easily be the enigmatic back end of the Thieves' Guild in Lankhmar or that creepy wizard place Daenarys goes in Game of Thrones where the guy with the blue lips who steals her dragons hangs out. I can see it being a temple in Yoon-Suin, for example, just replacing the cat-elves with crabmen.

Like Forgive Us and Carcosa, the nice thing about Zardax is its efficiency: it is about a certain kind of paranoid/surreal dungeoncrawl (like the high levels of Zelda where you start going "Ok, the music's changed, what's the deal in this place?") and presents that up front, without burying it in paragraphs of crust, and presents it all with enough whitespace around it to make it your own. You could do much worse for 7.77 bucks. I'm thinking it's 3-6 sessions of adventure in there.

-Since the movement rules of the place are unique, there are a few spots of magi-physics fine print where it's hard to tell just what Zzarchov is on about, though after a bit you can glean from context.

-The overall place is less puzzley than tricky meaning...SPOILERS (highlight to read) t's possible to escape via trial and error or luck and there aren't that many things that need to be figured out. It can be but does not have to be an intellectual player-skill challenge.

...which is cool (Red & Pleasant Land is often more tricky than puzzley) but more genuine puzzling does seem like a dimension that could easily have been worked into the adventure-as-advertised and which is surprisingly hard to come by in published stuff.

This last nitpick is easily fixed, however, and here's one way to do it (SPOILERS):

-Change it so the Exit (Room 20) is not the exit. That room is just some guys guarding cool treasure or something.

-The real way out is to go to Room 8 (The Lock) and open doors so that the overall floorplan of Room 8 plus the 8 rooms you attach to it forms a specific shape --and that ideal shape is clued in things found in the dungeon. You could even reshape the rooms so that, if properly attached, they form an 8-pointed star or something. Or, if you want to get real ambitious, have doors in the floor and ceiling so that you have to make a 3d shape.

Once the dungeon is twisted into that shape, the prison ceases to exist and the PCs are free

Another way to do it is:

-Put Scary Immortal Monster A in one room and Scary Immortal AntiMonster B in another. Only by rearranging the rooms so they meet and annihilate each other can you escape.

I don't think of this as evidence Zzarchov's done something wrong: The upshot for me is, after trying to think of different ways to make dungeons with interesting metapuzzles for year, the Gem Prison of Zardax created a set of tools that made it really easy to think up fun variants. 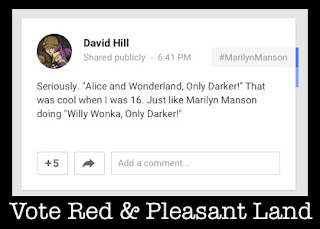 David Hill can't even wrap his head around stuff _he himself wrote_ much less anybody else.