There are lots (and lots and lots) of tools which can help you populate a dungeon, or roll up a random scenario. The problem I find with these is they don't really do the hard part of adventure invention for you. They say: "There's a goblin in this room, and nine in that room, a troll in that room. and a treasure chest in this one". Ok, thanks, that's good as far as it goes.

But really, in an adventure, what's actually in it is only half the deal. What the relationships between the things in it are are just as important Plus: most DMs have a few ideas about what they want in the adventure to begin with--it's making it all fit together that's the hard part.

I use the following method myself sometimes with megadungeons or worldbuilding and used it yesterday with Mandy--who is new to DMing and trying to figure out how to write adventures...

Step 1. Think of a handful (or more) of things you want in your adventure (or dungeon, or world, or city, or whatever--it works on any scale). These elements can be anything: monsters, NPCs, items, cities (possibly even themes, though I've never tried that). In this example I'm using: Witch, Giant Spider, Magic Dagger and Evil Monkey. If it's hard to pick elements, you can use one of the zillion random dungeon/hexmap/etc. generators out there to pick some for you.

Step 2. Write the elements across the top and down the side of a grid like so:

You put them in the same order left to right and up to down.

Step 3: Start with the top entry in the left hand column--"witch", move right, skip the first column (it also says "witch") then go to the second. "Witch-Giant Spider" think up a relationship between the witch and the giant spider, write it in.

Then go on to the next column--write in the relationship between the witch and the magic dagger, then the monkey.

Step 4. Go down to the next entry in the far left column--"Giant spider". Skip the first two columns, we already did "witch" and the second column is "giant spider". Go to "magic dagger"--we haven't done the "giant-spider--magic dagger" relationship so we do that now. Then "giant spider--evil monkey" etc. When you're done making a relationship between every element and every other element in the adventure it'll look like this...

And that's pretty much a whole night of D&D right there.

If you do it for a lot of elements, it'll end up looking like this mileage chart... 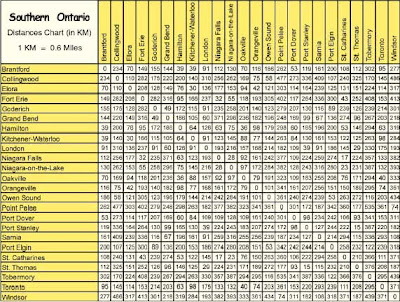 ...with a long diagonal of empty spaces down the middle. (They've repeated the same values in the top right half and bottom left half of the table for convenience--you obviously don't have to do that.) After a few sessions of a campaign you can take all the NPCs and monsters you invented in the breach and stick them in the chart and start building up a world with some internal consistency. and it starts to write itself.

Anyway, there you go.

By the way: anybody know what these kind of mash-up charts are called? They are kind of like Punnett Squares, but they aren't exactly that.

This is fucking brilliant. This is basically how I invent my sessions-- "hey look, new mini!" or "oh man I found this picture on the internet!" or "cool battle mechanic idea!"-- but it never occurred to me to lay it out like this. I...this...well play, Zak. WELL PLAYED.

I really like this idea, and I am going to go sit down and use it for my campaign in a few minutes.

I have no idea what that is called other than a mileage or a distance chart. As a computer dude who works with relational databases, I'm apt to call it a:

with trumpets blaring, and confetti falling, of course.

Anyone looking for a good example of this in action, "Stoon Lake" in Unknown Armies: Weep has one.

Did anyone do the logic games as a kid where you get a list of ten clues and then have to fill in a chart like this? Is there a name for those?

hüth: I remember those logic games. I found them in the crossword puzzle books my grandma did. I always attempted them but grew frustrated and never finished one. That's when I knew I'd never be a mathematician or programmer. Maybe I'd do better at them now?

Zak: fucking brilliant. It's one of those "why didn't I think of that?" ideas that almost nobody thinks of. Thank you.

Those are just like logic puzzles I used to do on long journeys as a kid. We'd get a book of them in the newsagents to keep us occupied (and quiet) in airports and on planes and stuff. Can't remember what they're called though.

Hmm, by the looks of things they're just called logic puzzles.

The other one is, I think, just called a relationship chart, but something tells me that's not the proper name for it.

Anyway, great idea. I'm going to give it a try later.

Wow. It's amazing how simple it seems when you break it down like that. I have my own complicated, idiosyncratic, time-consuming way of designing adventures, but I'm pretty sure it could benefit from the addition of the chart. I'll definitely give it a shot. Thanks for sharing. Seriously cool.

I use them at work occasionally, we call them an interaction matrix. One thing we do differently is instead of skipping the lower half of the chart, we would have how the item in the column interacts with the item in the row.

For example, in the "Witch" row the spider is the witches pet, but in the spider's row, maybe the spider secretly hates being the witch's pet and actually thinks it is using her as a pawn for his diabolical plan.

Call it a "Zak chart." Or, if you're in a hurry, a zakchart. Credit where credit is due.

By the way: anybody know what these kind of mash-up charts are called? They are kind of like Punnett Squares, but they aren't exactly that.

I've seen them called triangular charts. But I dunno if that's the proper term, or just a general descriptor...

This is exactly how I always planned adventures and campaigns since the mid-nineties, until I learned about indie games and started using relationship maps and other techniques. I called the process a "matrix adventure" because it generated an open-ended landscape of goals, emotional connections, and purpose-driven people, instead of the linear or branching kind of adventures I saw in role-playing supplements before that. The characters could literally go anywhere and still be in the web of relationships, so I never had any wasted prep.

I think I got the idea of calling it "matrix adventrures" from an AD&D splatbook of Villians that I read when I was a teenager. What that book called "matrix adventures" might have no connection to your idea though.

Gaptooth also said this, it got screened as spam for some stupid reason:


This is exactly how I always planned adventures and campaigns since the mid-nineties, until I learned about indie games and started using relationship maps and other techniques. I called the process a "matrix adventure" because it generated an open-ended landscape of goals, emotional connections, and purpose-driven people, instead of the linear or branching kind of adventures I saw in role-playing supplements before that. The characters could literally go anywhere and still be in the web of relationships, so I never had any wasted prep.

This is similar to the way I lay out relationships with characters in my novels. It's a good way to generate adventures, or even populate a village or town or city (depending on how much time you have on your hands) to create interesting relationships between major NPCs.

For high numbers of characters it can really capture the "economy of coincidence" that characterizes novel writing much more so than real life. Essentially we can only keep so many characters in our head so you get things like: the hero goes to a town in the other end of the country and the bootblack can't be a new character, no, he has to be the school bully from Chapter 2.

You don't need to leave that left bottom part empty either.

Witch feeds on spider eggs but the spiders hate the witch for eating their young for example.

naturally, one can always prep -more-

Hey, I like this, and now that I have inadvertently introduced about 17 plot elements into my Deadlands game I think I'm going to try it. Thanks!

Oh god. This is a life safer for me. I've been trying to figure out how to build great adventures and this is the most elegant solution I've seen so far.

The bottom left can be used for relationships that are not two way. Ever had unrequited love? Me to you is "loves", you to me is "loathes".

If you are a visual guy, you can also see this as a graph with bubble for each item and link between bubble for the interaction. Putting different information in higher and lower cell is equivalent to draw arrow instead of just link. (Or to be pedantic, they are graphs and oriented graphs ;) )