These are my hydras. They are crawling on some homemade terrain during a game of anarchist Warhammer 40k. Yes the spraypaint is terrain. 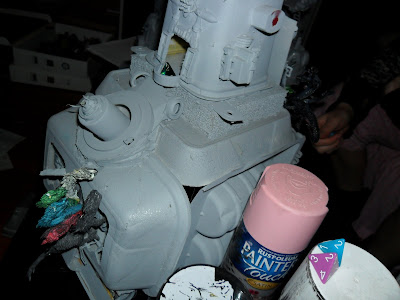 Here is the thing you maybe can't see very well about my hydras in the pictures: they suck.

Why? Because every round they regenerate on a 5 or 6. Or allegedly they do. Though Viv had one and I had one and they were the last foes to die in this game, they did not roll a 5 or 6 on a d6 once in the whole goddamn game. 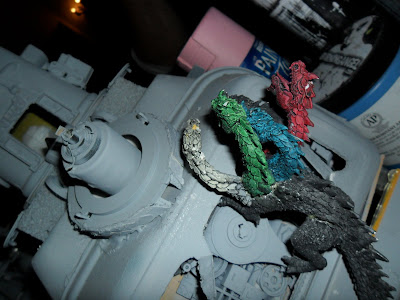 Fuck you hydras. Fuck your 5-headed scenery-climbing asses. You are losers. 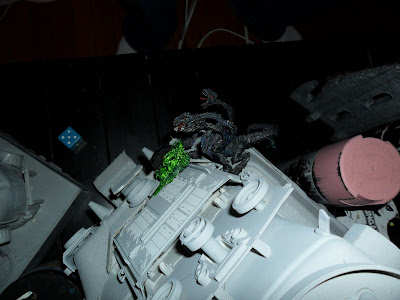 Sometimes he wins, sometimes I win, and this is all tolerable and all in good fun when it is a battle of wits--as it often is. It is good to have a Karpov. But sometimes he just wins by fucking raw luck. And when this happens it's infuriating. 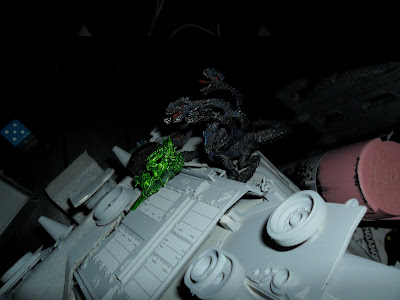 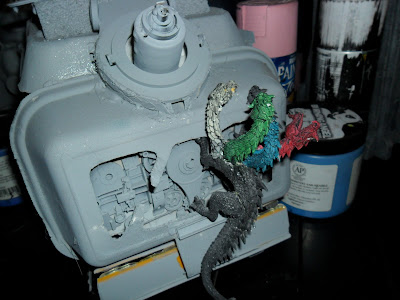 I suck at rolling dice, pretty much. When I'm DMing this is a pretty decent talent on accounta it allows me to set up seemingly unwinnable tension-crank situations and then say like "Ok, you all die if I roll better than a 2" and then I don't. Which is fun. It spreads a feeling of warmth and peace to know god hates you but is powerless to do anything about it. But when I'm playing? fuck that. 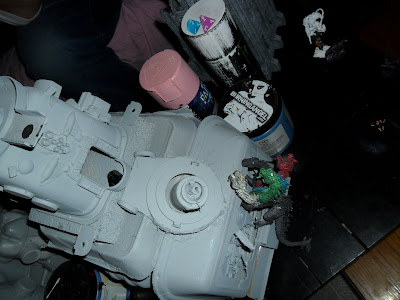 So in this like 3way Warhammer game versus me and Viv I'm thinking "Well my dice suck, but Viv's dice don't suck, so Cameraman Darren's natural favored-by-Jesus status means nothing..." 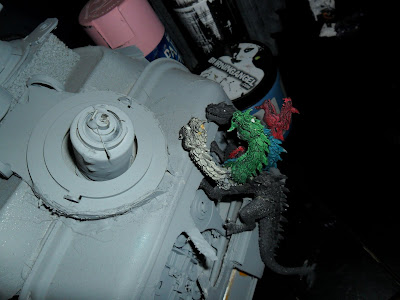 But no. Round One: I lose a Marine to Viv on account of the random scenery distribution puts my guy at a natural 2-to-1 disadvantage and initiative puts him last on account of I'm a gentleman and am like "Viv's never played before, she can go before me". Round 2: I lose a Terminator (who cannot shoot straight) to Darren, leaving me with just a hydra. Meanwhile Darren takes out Viv's witch and tyranid in one (followfire) shot, leaving her with one hydra.

This leaves Dr Smug with all his guys and me and Viv with one hydra each. And then they just wallow in the gunsights, taking a ridiculously long time to chew up the cannon fodder and not regenerating for like an hour and a half. Fuck you hydras. Fucking hydras.

Now Cameraman Darren alleges his catastrophe-spike goes both ways. He claims he accidentally blew up a city in R0lemaster rolling a negative 300+ anticrit. But whatever. I haven't seen it.

And I wish I could bask in the comfort of all your comments about such holes as you think there are in the 40k system, but, no, this is homemade version and I pretty much rebuilt the whole thing form the chassis up. It was not Games Workshop's fault: it was all down to the dice, and the dice were determined to dispense ignominious death. Fate, I despitheth thee...

Do you know what "nemesis" means? A righteous infliction of retribution manifested by an appropriate agent. Personified in this case by an 'orrible cunt... me.

My smugness will radiate so brightly that it will warm you even in the wintery grip of Canadia!

I have died that terrible, terrible die-related death more times than I can count to my brothers in one of my favorite games - Talisman but with Calvinball rules.... normally it's fun but eff the dice, let me say.

Just yesterday I was thinking--

"I don't care how true an atheist, how Vulcan a scientist, how hardcore a skeptic...every gamer is superstitious & believes in luck. Even if they dress it up in 'imperfections in the dice' or what have you."

I share you pain. I can't roll well to save my life-- sometimes literally. I'll just flail all over, falling down pit traps or whatever.

In my experience, the dice can tell a) what system you are playing, & b) whether you are the Narrator or a Player. I had a friend who, whenever he ran Earthdawn, was DOOM given flesh. He's roll 20 on an exploding die...twice...consistently. I'd watch it happen-- usually to another character, because somehow my PC was the only one who survived three TPKs in that campaign. Conversely, when I played Star Wars (the West End version) I was unstoppable; all sixes on the wild die, every time. Or when I played Rolemaster-- if I overchanneled, or whatever? If I tried to cast the spell I knew on my list but shouldn't've been able to? I KNEW I could count on going above a 96.

Alas those days are gone. I've never had much luck with a d20; I always roll terrible. I made the stupid "I have a like, x5 critical!" character, & I played him from level 1 to level 16 & he critted...once. On a monster with one hit point. The system I run is a d10-- World of Darkness-- & I think I'm probably in the normal statistical distribution. I'm neither the reaper nor the fool. I can live with that.

I thought this post would be about the Captain America movie. Hail Hydra!

Dice roll are part of the play and it could be really fun to see strange things happens.
Meaning roleplayers always have a fun story to tell.
Spacemaster. A friend of mine was playing a smuggler with his own ship (remenber yann Solo's falcon. His was a garbage vessel, nothing outstanding), try to pass through the custom vessel pretending having probleme to pilot it, and brush a bit against them.
Make a divine roll 286 or something like that with a bare 25 bonus. The Dm roll for the Custom reaction, 330 negative roll for the custom pilot. Crash in the orbit, welcome to happy landing time. :)

My favorite Rolemaster roll was when our Monk, being boiled alive by cannibal orcs, tried to use his Body Control (I think?) skill in order to normalize his temperature & survive the process. He rolled under on the exploding die, & if I recall correctly, his negative result just said "Thanks for playing."