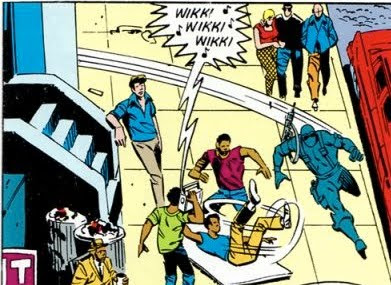 Cyclopeatron's round up of Gygax's house rules: One of those things somebody needed to do--like having Black Sabbath's Iron Man on the Iron Man soundtrack. Plus it'll settle some bar bets.

How to create a player character:

The quickie diceless character generation thing is hardly earth-shaking, though it might be useful in tournaments, but I must complement the taste of whoever runs the Robertson Games blog on accompanying it with a gorgeous rendering of the Norns weaving the skeins of fate into a dragon--is it Arthur Rackham? Oh, thank you google it is.

The Roles, Rules & Rolls character sheet & generation is useful, classy ( roll a 3 for status and you get a bikini) good for tournaments, and somewhat inspiring. I particularly like the "Background (in one word)"(--I immediately thought "Fucked"). Though my game is bastard enough that some of the categories here don't apply, the designwork of getting all the scores and character gen steps on one page can't help but make anybody who runs games with new PCs all the time think "I need to fucking do this".

However, it does point up a missing link in the wikiwisdom chain: has anybody done a composite chargen flowchart for all early editions or anything close?

The childhood and adolescent events from the Valley of the Blue Snails are things I told people to put on there so it's obvious I think they're cool so I'll shut up about them now.

B/X Blackrazor's (If I ever have a child I'm naming it--boy or girl--B.X. Blackrazor) 100 Reasons Characters Are Together is very cool for the very reasons JB gives in the original post: it isn't just a zany list of ways the PCs could've met, it gives the kind of simple-but-memorable shared backgrounds that the players can start off by using as fodder for dumb intra-PC jokes but which will, from there, develop into actual PC characteristics and relationships. The one time I played 4e it was with a bunch of strangers and they gave us pregens--another guy's PC was my bodyguard and the rest of the PCs had no real rationale for being there. We had a blast going back-and-forth with that. I kinda am thinking now that giving the PC inter-relationships to start with is actually more important than worrying about individual personality traits per se, in terms of developing an interesting, durable, playable inter-party roleplaying atmosphere during a game. There's a reason Marvel was way more into team books than DC. It's not about who you are, it's about how you bounce off everybody else.

Anyway I am now regretting I didn't do this back when my current campaign started and am thinking about ways to retroactively do it. NEXT...

Now, holy fuck it's the Scott Bennie Characterization Made Easy article from Dragon which is like one of the very few Dragon articles I ever read that I remember. Let me see if I can remember what was in it without looking...
-the guy in the example says his guy's "chaotic neutral so it means he can do whatever he wants"
-his interlocutor keeps asking what his personality is like
-the actual suggestions include:
-a thing where they ask what movie character the PC is like
-what habits of the other PCs annoy him/her...
-...aaaand...that's all I remember.

Let us see...whoa, I was right, so far as it goes...Now, ok I am reading it. I am getting bored. Scanning, drifting...zzzzzzz...alright, I'm being unfair.

Ok, really this is a classic Silver Age of RPGs bolt-on-more-stuff way to make your game more interesting. The questions are pretty psych-inventory standard--they will be fun for people who are into this sort of thing, including me. Like I would totally run any PC I made through this, and it would probably add some fun, playable detail to the character.

However, I like Blackrazor's "why are the PCs together" table better because it's fast and you can use it to take a player who doesn't have lots of ideas about how to role-play their PC and use it to tease role-playing out of them in such a way that it will start to seem fun organically. The battery of questions in this article, at least for new players, requires a lot more buy-in. And if the other players at the table aren't already down with that, then you just have this one player at the table whose favorite animal is the muskrat (question 3e) and no reason to bring it up.

Short answer: the Dragon article gives you more to work with, but Blackrazor's table does it way cheaper. And when it comes to "stuff-the-girls-have-to-do-before-we-even-get-out-of-the-tavern" I will go for fast and cheap every time.

Though, to be honest, I prefer fast and cheap in all endeavors in life.

Now we've got Bohemian's "Good-At" System for Old School skills. It's super simple and fast, it requires no knowledge of the game system, so it's good for new players and I am going to start using it immediately. Oh I am so glad I started doing this goddamn wiki-review thing. There's good stuff in here.

(I do see a flaw in the "good-at" system: glue-sniffing teenagers will use it to power game. However, we don't have any of those in our group.) (Mostly.)

JB's 100 reasons is pure gold, and it would be what I would have added if someone hadn't beat me to it. I'm also fond of his random hats table, although it's probably not essential enough for the wiki.

JB's Hats are there under armor: helmets and headgear! Remarkably I think using Moldvay as a contents template is working reasonably well! Most entries seem logical and the ease of entry is a huge bonus. Some people are asking where to put things - I say put them where they feel right and let the wiki grow organically. And add subheadings for similar topics. Lots of subheadings.

You are now my second fsvorite Priest, right after the Screaming For Vengeance one.

So many words with so little content. As a writer just as an 'artist' you are an autistic doodler scratching away ad nauseam. Why don't you think before you write and say less.

As a writer, you forgot that your last sentence needs a question mark. Someone as pretentious as you are really should learn the basics of usage and grammar.

Anyway, to answer your question: why am I so horrible at everything?
Because of how worn out I am from how I had sex with your mom. Duh.

Jesus. How many times do I have to remind you?

I think your efforts at quality control on the wiki are a good thing, except I don't know what other people will consider good quality. And I think jovial and alex aren't also policing for quality?

I've put a couple of things up there without really asking myself if they're worthy because I figured if other people thought they were timewasting crap they'd delete them (it being a wiki). Now I'm not so sure about this approach.

@ Richard: You are totally right, Alex and I are not policing the wiki for quality. The only policing we have done is for headings and structure.
I am of the belief that if the wiki is to prove beneficial for the OSR community, it must belong to the OSR community.
But without order will the wiki drown under it's own weight? Can we organically grow order without 'authorised' moderators?
I've just posted a poll to gauge opinion in the OSR community to such questions. I'm as fascinated as you to the answer.
What do you think Zak?

I'm kind of thinking, actually, that I should dial back on talking about the wiki. I feel like if it becomes TOO much of a "prize", people will started arguing over it and being dicks. I think it should be a more quiet thing--only people who genuinely have something to add will bother to go there, and so there's little to be gained from grandstanding about "Hey why is so and so in and why's so and so not" and blah blah.

@ Zak: I'm with you, no hall of fame. I've joined the AtoZ April blogging challenge and was about to dump my chosen obscure rules based theme for a wiki theme to continue it's promotion. You know A is for Alex, B is for B/X Blackrazor... And Z is for... You. Easy.
Except with your above comment I am more than ever convinced it's time to return to minnow blogger status and return to churning out more rules based content for my sub 50 followers.
Not that I am abandoning the wiki, far from it, and I await my poll results with interest. But going quiet might allow deeper roots.